Well, according to many investors in gold, at least in theory. The central bank prints money, inflation goes up, and gold prices – as an inflation hedge per excellence – go up as well. This seemingly simple logic appears to hold some truth but is – unfortunately – entirely wrong. What is the real deal?

Who Determines the Money Supply?

A central bank can earn money by issuing monetary base (deposits and currency), over which no interest is paid, and use newly issued monetary base to acquire assets that do earn interest. An example:

This is, of course, a pretty neat source of income. On the one hand, you issue zero-interest-bearing deposits and on the other hand you acquire positive-interest-bearing paper: the difference (that is, seigniorage) has always been the main argument to defend a publicly-owned and publicly-controlled central bank. The income from seigniorage is a source of revenue for the war chest of the government´s Treasury department. DNB, the Dutch National Bank, for instance easily contributes approximately €600 million a year to the Dutch government´s bank account.

Now, since central banks have begun to pay interest over these commercial bank deposits (even though the ECB currently “pays” a negative rate, that is, they charge money over their liabilities), the income raised from seigniorage is declining to the degree that interest must be paid to commercial banks.

So, If the Central Bank Does Not Determine the Money Supply, Who Does?

But if the commercial banking system nor the central bank determine the money supply, who does?

The answer is simple: you. To the degree that you opt to hold part of your savings in a bank account – instead of other investments such as gold, stocks or bonds – the banking system is able to lend money. The size of the (consolidated) balance sheet of the banking system is dependent upon the willingness of the public to hold bank deposits as a part of their portfolios.

Why so? Again, a straightforward answer: Fullarton´s law of reflux (also known as the law of adverse clearings).

Whoever accepts Fullarton´s law as true, cannot avoid concluding that the money supply is the result of our decisions as depositors, and not of banks themselves, nor of the central bank. As soon as banks bring more bank deposits in circulation (by creating loans) than the demand to hold such bank deposits (as a part of a portfolio), the excess come straight back to the hands of the issuing bank. When these issued deposits “reflux,” they imply a drain on a part of the bank´s assets: the bank must either pay at the clearinghouse for the “reflux” or pay straight to the deposit holder the cash he or she wishes to withdraw from the bank (in the latter case, the bank balance sheet also shrinks).

This means that the money supply – in principle – remains aligned with the “demand for money” (not to be confused with the demand for credit).

The Misleading Quantity Theory of Money

The nature of the problem is clear: for centuries, monetary economists have viewed money as a type of tangible good – of which physical supply and demand are decisive for the purchasing power of a monetary unit. A greater supply of bread? The lower its price. This is precisely what the “quantity theory of money” asserts in the case of modern money. This theory is widely held by neoclassical economists such as Nobel Prize laureate Milton Friedman, but also by modern-day bankers of the Bundesbank, to highlight an example.

This, however, is a mistake: bank money is a financial asset, and for financial assets simple demand and supply laws do not apply. That is, no one would dare to say that an increase in the number of Amazon shares, would necessarily imply a drop in the value (underlying assets) of a share in Amazon. Of course, Amazon could dilute its shares. But what is also a possibility, is that Amazon issues new shares to raise money. In the latter case, the number of Amazon shares in circulation increases, but the newly issued shares are backed by newly gained assets. The value of one Amazon share, as a result, does not necessarily have to decline, despite an increase in its “quantity” or quantitative supply.

It's All About Backing

Hence, what matters, is whatever is behind any deposits issued (just as what matters in the case of Amazon shares Amazon’s underlying assets are). That is, whatever is held on the asset side of the balance sheet. Take for instance the case of Zimbabwe. Below you will find a chart in which, on the one hand, the money supply is depicted by the green curve and, on the other hand, inflation is depicted by the orange curve, according to a log scale.

What do we observe? Apparently, a clear example of two variables that move up together. The banking system in Zimbabwe adds to the money supply and inflation rises. Therefore, an investment in gold would have been a good idea being a Zimbabwean. 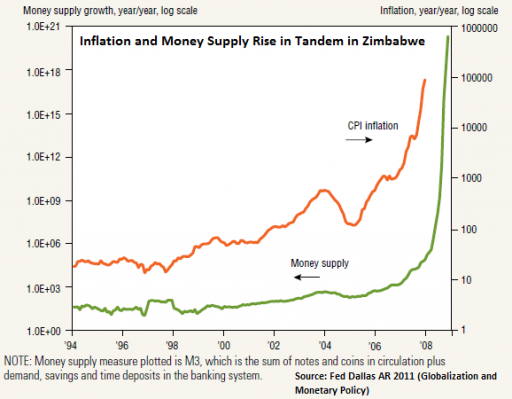 <p>Observe the money supply and inflation rate in Zimbabwe since 1994. A clear example of the quantity theory of money, right?</p>

Is There Something Else Going On?

The quantity theory of money is strictly taken an error. Take the following example. The money supply in the United States (M1 – all bank deposits and currency) has not ceased to increase since 1960. Even in 2008 – during the height of the Great Recession – the M1 money supply rose as if nothing happened.

Where was the inflation, though? Inflation was nowhere to be seen. Not anywhere near significant in the 1990s, nor in the years preceding 2007 (yes, there was some inflation, for the naysayers, but certainly not the high and devastating inflation rates of the 1970s) and most definitely not during and after the Great Recession of 2008. What is the story here?

The difference between Zimbabwe and the United States must be clear: Zimbabwe suffered a civil war and the Zimbabwean government went through a devastating state crisis. Public debt, of course, was no longer paid for and Zimbabwe defaulted on its debt. The backing behind Zimbabwean-issued currency therefore ceased to exist. The central bank from one moment to another was without means to execute monetary policy.

<p>The money supply in the United States increases year after year, but there is little sight of inflation. Source: St Louis Fed.</p>

Could inflation arise? Of course. But not so much because of growth in the money supply, but better yet because of a decline of the quality of the assets that back our money. The creditworthiness – according to the market, not according to credit rating agencies – of the United States government and mortgage debt is, for instance, an important factor.

The rising federal budget deficit in the United States and the increasing doubts with regard to the fiscal path of the Trump administration could, as a result, have some ugly consequences. Gold, in that case, could easily come out as a winner. Because even though the relation between money and inflation is not as simple as many economists pretend, the relation between inflation and gold is very well established and defendable.