Investors can be divided into two groups: one group strongly believes that gold will protect their savings during a period of rapidly increasing inflation; the other group thinks that stocks are a better protection against inflation. Who’s right? What is the best hedge against inflation: gold or stocks?

Investors can be divided into two groups: one group strongly believes that gold will protect their savings during a period of rapidly increasing inflation; the other group thinks that stocks are a better protection against inflation. Who’s right? What is the best hedge against inflation: gold or stocks?

Warren Buffett — legendary investor and once the richest man in the world — belongs to the group that regards stocks as the best possible inflation hedge. His argument: the underlying company should be able to produce something that is able to retain its profitability in inflationary times by raising prices. According to Buffet’s theory, stock prices should move in line with a severe decline in the purchasing power of a currency.

The inflation of the 70’s is perhaps the best real-life example with which we can examine the inflation-protective power of stocks.

The ‘Stagflation’ of the 70’s: Inflation & Stock Prices 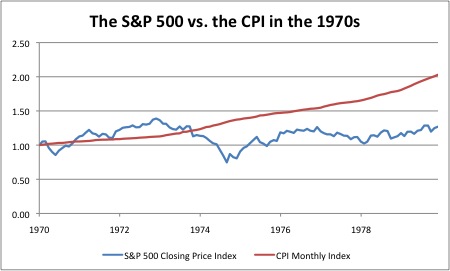 Another case in point is the stock market in Venezuela, which disproves our thesis. At least, it appears so. The index increased a stunning 480% in 2013, while inflation increased from 30% annually to almost 30% monthly: the best performing stock market of the year, indeed, but only in nominal terms.

The one problem with this reasoning: the increasingly worthless Venezuelan currency — ironically called the ‘bolivar fuerte’ — cannot be exchanged for foreign currency due to the foreign exchange controls. The Venezuelan stock market is driven by inflation, but only because of the fact that it goes hand in hand with exchange controls do stock prices increase that much: money cannot leave the country and looks for domestic safe havens. 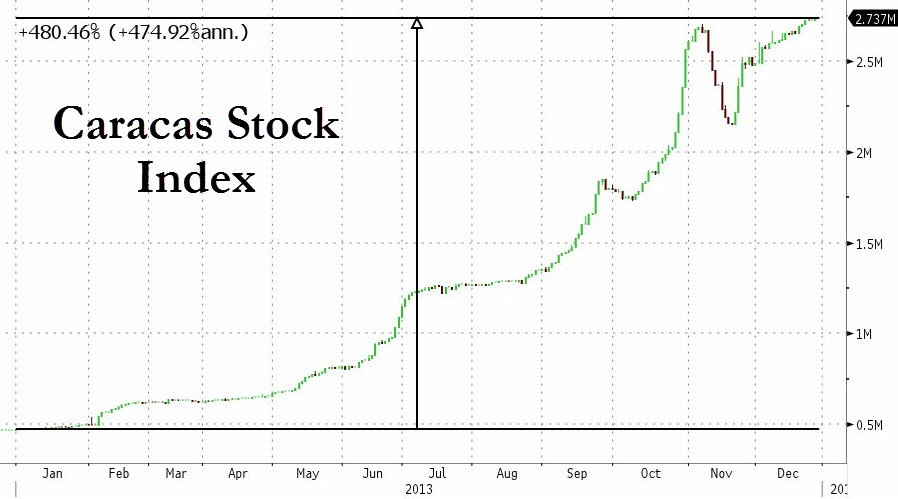 This, however, does not imply that the same applies to western markets. First, there are no exchange controls in developed markets; nor do they seem likely at the moment. Second, the Venezuelan stock index is no longer an “index”; the few stocks that remain after rampant socialism, are illiquid to such an extent — the stock of the world-famous  Santa Teresa rum hasn’t been traded for over a year — that we cannot consider it a real stock market anymore.

Stocks as Inflation Hedge? Even the Richest Man in the World Commits Mistakes

Buffet’s theory is wrong for various reasons. A company not only increases its prices during inflation, but also suffers from rising costs. In many cases the costs increase even faster than the ability of the company to raise prices and, as a result, margins come under pressure. Moreover, inflation can actually coincide with economic stagnation and falling production, contrary to the opinion of many economists, as it did in the 70’s.

Empirically we see declining stock prices across the board in inflationary times, also because stock prices are bid up to such heights that even with higher inflation stock valuations seem generous. In brief, stocks, above all when they are overvalued (corporate profits tend to rise before consumer prices), do not constitute a good protection against inflation.

Gold as Inflation Hedge: It Depends on the Price 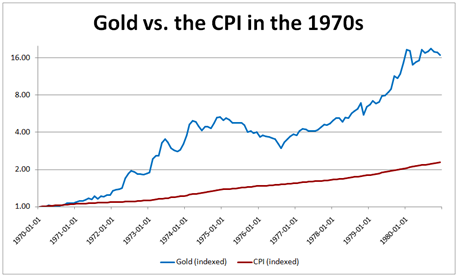 At the moment high inflation seems far-fetched, but that is exactly why it currently pays off to buy precious metals as an insurance against inflation. Right now the insurance premium is affordable. Right now stock prices seem too high and gold prices too low, in anticipation of possible inflation caused by heedless central bank policies. The recent negative real interest rate — the interest rate minus price inflation — still indicates rising consumer prices in the future.

For the same reason it will be soon too late to include gold as protection against inflation in an investment portfolio — inflation has then already hit, the house is already on fire.