A remarkable statement by current Fed Chair Janet Yellen: she publicly stated, and without blinking an eye, that no new financial crisis will erupt in our lifetimes. With special emphasis on our lifetimes; if Yellen would have said my lifetime, things would be different (although even then she would be utterly wrong; a crisis is approaching and approaching fast). With 70 years of experience Yellen can be called a Fed veteran, and rightly so. But a veteran with “only” 16 years ahead of herself, if we rely on a mortality table of any randomly picked life insurer. “Will I say there will never, ever be another financial crisis? No, probably that would be going too far. But I do think we’re much safer and I hope that it will not be in our lifetimes and I don’t believe it will,” responded Yellen, when she was asked about the potential of a new crisis.

The idea that in the, say, next sixteen years that remain for Janet Yellen we will avoid having another crisis is pure nonsense. Let alone the entire life expectancy of a newborn child. What Yellen says, boils down to a complete denial of both economic theory and economic history.

Ever since World War II, every 58 months of economic expansion is followed, on average, by an economic downturn of 11 months. In other words, every five years is historically followed by one year of recession. In short, Janet Yellen is contradicting, without any substantial argument, the past six decades.

And it does not stop at that: economists such as Ludwig von Mises demonstrated many decades ago that economic cycles are not some kind of natural phenomenon which strike us as the change of the seasons. Economic cycles are the inevitable result of the set-up of our current financial sector. A financial sector characterized by fiat money protected by legal tender laws, a monopolistic central bank that pretends fixing interest rates from the top down, a by governments centralized risk management, countless rules and regulations, and the idea that we can have heaven on earth as long as the banking system is able to force down long-term interest rates.

In short, Yellen’s statement is absolute nonsense. Better yet, the US economy is weakening at a disturbing pace, exactly in line with the recent rate hikes by the Fed. So not only is it a complete certainty that we will live through another crisis in our remaining days on earth, but a crisis is exactly far closer than many think. In the sixteen years that Yellen (on average) has left, a new crisis is bound to happen. And in those 78 years of a newborn, multiple crises will most certainly hit.

Perhaps did Janet Yellen mean to say that she does not expect a new crisis before her four-year term expires. Because it remains to be seen (and is highly doubtful) whether Yellen will hold the reins at the Fed for the next sixteen years.

With only six months ahead before Yellen’s term expires and little hope for an extension of her term as Fed Chair since it is Donald Trump’s task to reappoint Yellen, the incentives to further hike rates seem close to none. The market expects just one more interest rate hike from Janet Yellen. Whatever the case, few to none rate hikes are necessary to bring the US economy on the verge of a recession.

The first question that arises if Yellen was as serious as she appeared to be about excluding the possibility of a new financial crisis, then why are stress tests that assume a scenario of financial crisis necessary in the first place?

Banks, however, seized the opportunity with both hands and paid out more than 100% of earnings to shareholders (both by buying back shares and paying out dividends): 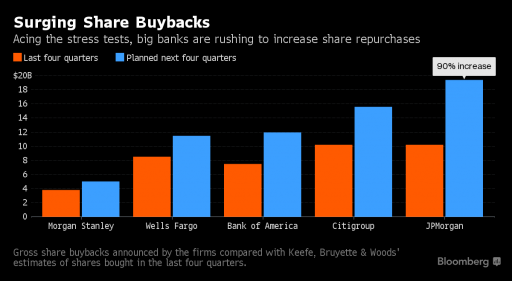 A distribution of bank profits to shareholders at the expense of capital buffers of banks. (Curious, to say the least, since extended or double shareholder liability for bank owners is a rarity in history but has been highly effective in assuring highly capitalized banks.) Now, the minimum requirements for these capital buffers are all based on “weighted” assets, which means that some assets, such as bank reserves (deposits at the Fed), do not count at all and as a result capital as a percentage of total assets appears high on paper, even though things are quite different in practice.

But what if the Fed begins shrinking its balance sheet and sells a part of its assets (or simply does not roll over maturating US Treasuries)? In fact, the Fed announced that the proceeds of a part of the US Treasuries that reach maturity will no longer be reinvested into new US Treasury bonds. This means that the Fed balance sheet will shrink gradually. Less reserves, less risk-free assets, which translate into lower capital buffers relative to risk-weighted assets.

The Fed as Creator of Crises

Unfortunately, the Fed still lives in the fairytale world in which a centralized monetary policy only solves problems, and never causes any problems. In which the Fed presents itself as a lifesaver when the global economy falters. In which the Fed could, certainly not, unconsciously cause the economy to falter.

Because if the Fed would be able to understand the theories developed by Ludwig von Mises and Friedrich Hayek, then they would understand that their policies are counterproductive as well. That their policies cause the problems they so desperately try to solve. And that it is darn complicated to solve a problem by doing more of whatever it caused, or was part of the cause, in the first place.

I have labeled the Fed on multiple occasions a pyromaniac firefighter. That is perhaps the best possible analogy we can make. But Yellen is apparently a sleepwalking pyromaniac fire fighter, who is completely unaware of any wrongdoing.

Next week we will take a closer look at the warning signs that are flashing in the US economy.
Share this article