Do you know which were the best performing markets of 2016? Which investments showed the most impressive annual returns? The answer might surprise you: the Brazilian Bovespa was one of the outperformers, together with the Russian Micex-index (I have been investing in Russia for the past two years.) These two stock markets rose by almost 70% and 60% respectively in 2016. Oil (WTI) follows suit, with an annual return exceeding 40% (oil prices came from extreme lows.) The WTI oil price narrowed the gap with Brent oil, which rose “only” 20%. Other assets worth mentioning are copper, U.S. high-yield bonds (or “junk bonds,” about which I warned earlier), silver, the S&P 500 stock market index, and at a respectable distance, gold. How likely is it that the best performing assets in 2016 will be the best performing assets in 2017 as well?

These Were the Best Performing Markets in 2016

Below you can find a chart with the best performing asset classes of 2016: 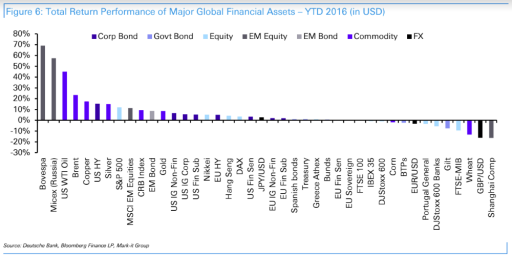 Let’s Begin with the Outperformers: Russia and Brazil

Russia and Brazil: both countries were in a deep mess. In Brazil, a political crisis erupted, while Russia was suffering economically after commodity prices declined sharply and the U.S. and the European Union imposed trade sanctions. Both the Russian ruble and the Brazilian real lost in the period preceding 2016 a large part of their respective values.

2016 became the year of their revenge. Both the ruble and the real recovered, and their respective stock markets began to rise. After months of capital flight, finally some foreign capital came pouring back into the countries. Investors had renewed confidence.

At the end of last year, Russia even enjoyed an additional boost with the election of Donald Trump. The expectation is that he will maintain better relations with the Russians and perhaps remove the trade sanctions. Trump or not, the Russian stock market already began a convincing recovery, which translated into high returns for the year.

How likely is it that these two markets will show the same high returns in 2017?

Both stock markets had one thing in common: both came from extreme lows. The sentiment was so negative that company assets could be bought for pennies on the dollar.

But that is where the comparison ends.

Russia has been opening up and it appears, in all respects, that the Russians will have a positive year in 2017. Brazil, however, suffers from the same structural problems that have served as an impediment to sustainable growth during the past decades.

For a (rather short) while, I was an investor in Petrobras, Brazil’s oil giant. Nevertheless, the red tape in Brazil is so hostile to business that in the mid-long term there can be no structural growth. The rally in Brazil was temporary, assuming no structural reforms are introduced. Russia, on the other hand, remains on track and is slowly opening up its economy.

I have been investing in the Russian Gazprom and the Colombian Ecopetrol as of lately. These oil companies expect – as an optimistic board tends to – more or less stable oil prices in 2017. This expectation is difficult to assess, since the expectation is not based on the supply side of oil (which indeed appears to be stable), but rather the demand side. With slower growth in China, we mU.S.t wait and see whether the forecasted demand for oil will materialize in 2017. If this is not the case, especially in combination with slow or negative economic growth elsewhere, oil producers have a problem.

Of course, the marginal oil producers will go out of business first: production will decrease and the oil price will recover.

I personally expect that in 2017 the American shale oil industry will shrink further with some important bankruptcies, but that oil prices on average will remain near the same level.

The S&P 500 did, yet again, a wonderful job in 2016. Money kept pouring into the United States, mainly because of a strengthening of the dollar. Foreign investors earn returns on both the currency and on the bonds or stocks they buy and hold. When you add up the returns, which in the past year have been positive, you get some impressive total returns in local currencies. This, in turn, leads to more foreign investment pouring into the country, an effect which investor George Soros calls “reflexivity,” akin to a positive feedback mechanism in capital markets.

In the first half of 2017, I expect that U.S. stock markets will remain at similar levels as today or even continue their increase. As long as the dollar continues its upward trend (and with the prospect of more rate hikes this will be the case), U.S. stock markets will keep attracting foreign investment. And theories to jU.S.tify the bubble in stock prices can be found almost anywhere (they are most likely false as well).

Only when the interest rate hikes (and appreciating dollar) will lead the U.S. economy to slip slowly into recession, the tide will turn. At that moment, the dollar might appreciate further (but then as a safe haven), but U.S. stock prices will begin their – I expect – steep decline.

The EUR/USD might, for the reasons outlined here, decrease further (I expect parity and an even lower euro).

The U.S. “junk bond” market, which of course depends on these developments, will certainly not be among the best performing investments of 2017. I still argue that investors should avoid these junk bonds at any cost. Unfortunately, many investors fall into the trap of these “high yield bonds” and are investing in mutual bond funds that have a frightening downside to them. Better yet, it might even be interesting to consider shorting these high-yield bond funds.

Brexit and the British Stock Market

The idea that higher stock prices in Great-Britain somehow proves that Brexit has been a great decision, is somewhat absurd. The booming British stock market went hand in hand with a (historic) decline of the British pound.

As soon as Brexit is a fact, the British pound will not suddenly recover its losses (as, on the contrary, the Russian ruble managed to do in 2016), yet British corporate earnings will suffer from the more difficult trade climate. The idea that the rally in the British stock market will continue is, therefore, I suspect, a fairytale.

Last but Not Least: Silver and Gold

Silver, in the wake of gold, enjoyed a good year in 2016: the silver price rose by more than 10%. The gold price also went up, although somewhat less than silver. Of course, as I remarked last week, precious metals rallied in the first quarter of last year, but retreated over the course of the year after Q1.

For now, it seems that gold and silver prices are going nowhere. It must be said that investing in silver or gold protects European investors against a declining euro. But silver and gold might suffer, nevertheless, from an initial setback in 2017.

It appears that the silver and gold price, contrary to last year, are off for a bad start in 2017. A temporary rally (as has been the case ever since Christmas) to above $1,200 per troy ounce is a possibility. But there are currently no fundamental factors, at least for now, that might lead gold and silver to resume their secular bull markets.

Keeping in mind the idea that someone who predicts must act upon his or her predictions (“skin in the game,” as Black Swan author Nassim Taleb calls it), I must admit that while I expect precious metals prices (in dollars) to drop a bit further, I am definitely not short gold or silver. Better yet, I have a small position in precious metals. But in the case gold prices approach $1,000 per troy ounce, I will have enough ammo to increase my position substantially. Despite a (possibly) disappointing first quarter, the next few years seem promising for an investment in gold.

For copper, another asset that enjoyed double-digit returns in 2016, this is unfortunately not the case. Since copper demand depends on construction, and can in no way be considered a safe haven, disappointing Chinese economic growth should lead to lower copper prices (yes, I am aware that copper prices have already declined due to the problems in China.)

If you want to look back on some nice returns in the coming years – especially in comparison to stock and bond markets – and you do not care for more risky endeavors in emerging markets, then you have every reason to stay in precious metals.