In 2007, the world economy began to show signs of an impending downturn. At the beginning of March 2008, the Federal Reserve was forced to rescue the corporate bank Bear Stearns. Suddenly, the crisis became an undeniable fact, even among the most optimistic among us. That very same week, gold prices rose to over $1,000 dollar per troy ounce. The recession of 2008 began to gain in strength. The banking system came close to a complete collapse. On Monday September 15, 2008, the crisis reached a climax, when the U.S. bank Lehman Brothers filed for bankruptcy. One month later, the Dutch government, among many other governments, was forced to bailout the nation´s commercial banks: in October 2008, Fortis/ABN AMRO was nationalized. ING, Aegon and SNS Bank also received an injection of capital in the neighborhood of €14 billion euro.

What did the gold price do in 2008 between the moment of the bailout of Bear Stearns and the bankruptcy of Lehman Brothers six months later? The gold price should have risen, of course, you might be thinking at this point. But the exact opposite happened. The gold price declined: from over $1,000 per troy ounce to $775 per troy ounce on the very day Lehman went under. The day ABN AMRO was nationalized, and European governments were panicking and bailing out other illiquid banks, the gold price even declined to $730 per troy ounce. Ultimately, the gold price closed the year at $870 per ounce, still 13% lower than the price of gold at the time of the Bear Stearns bailout. How could it be that during the severest recession since the Great Depression of the 1930s gold prices dropped instead of rose? Is the whole reason for investing in gold not to protect us from precisely such crises?

Let us, before continuing, take a look at gold prices in 2007 and 2008 so you can see that I did not make up the numbers that I mentioned in the introduction.

In the chart below, you can observe that the gold price fell tremendously after the Bear Stearns rescue: the gold price even fell by over 25%! Gold investors panicked: how could it for heaven’s sake be that the banking system reaches a point of complete collapse and that gold, the ultimate safe haven, declines in price? Only in the second half of 2009 did gold prices recover and reached a level of over $1,000 per troy ounce (eventually, the gold price would reach a record high of almost $1,900 per troy ounce in September 2011). 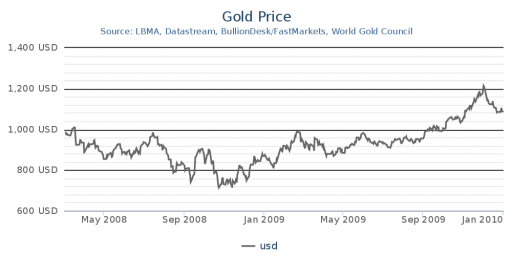 Central Banks and the Gold Market

As you might know, gold lost its monetary status in 1971, when president Nixon severed all links with gold. Since that moment we live in the age of the dollar standard. This means that ultimately all debts are settled in dollars (currency) or with Fed deposits. To cancel or repay debts banks thus, and other players on financial markets, need dollars. “Cash is king,” some would say, especially when things go awry. This means also that gold cannot be used to pay off debt, unless it is sold for dollars after which dollars can be used for that aim.

Generally, central banks are ready to provide liquidity to their member banks whenever they might need it: commercial banks can pledge collateral (for instance: US Treasuries, German Bunds) at the central bank for an emergency loan. Illiquid assets are exchanged for liquid ones (in this case dollars or euros). Banks are able to resolve liquidity problems with such emergency loans: for example, when bank deposit holders massively withdraw money to other banks, adverse clearing might be a problem for the bank which can be temporarily taken care of with such emergency loans.

What is less known, is that central banks can do the same, but for the so-called ´bullion banks´ in gold liquidity. These banks, which are active on the gold bullion market, are in many cases ´primary dealers´ of the Fed as well: primary dealers buy government bonds directly from the state, hold them as dealer inventory, and resell them to other (both financial and retail) clients. What if one of these bullion banks has a shortage of gold? In that case, bullion banks can lease gold from, for example, the Fed.

The GOFO and the Gold Market

GOFO simply stands for “Gold Forward,” or even better, “Gold Forward Offered Rate.” GOFO is not the “rate” one pays to borrow gold (this rate is instead also called the “Gold Lease Rate”), but is strongly related to gold leasing. GOFO is actually the rate on a type of dollar loan with gold as collateral. In this regard, GOFO is an indication of the demand for gold as collateral. (You could read a more extensive treatment of GOFO by Koos Jansen here.)

What in fact happens is the following:

What does it mean when GOFO is negative? This means that LIBOR is higher than the gold lease rate. In other words, the market is willing to pay a higher rate on a dollar loan than on a gold loan.

This is quite extraordinary, because it must be clear that GOFO as a general rule is positive: borrowing in dollars is cheaper than borrowing in gold grams.

On a side note: GOFO was tracked and published as a benchmark by the London Bullion Market Association (LBMA) – an association that consists of the earlier-mentioned ´bullion banks´. Since 2015 the LBMA stopped publishing GOFO. This, however, does not mean that GOFO no longer exists, just that it is now negotiated behind closed doors and directly agreed upon between the parties involved. Monetary Metals, nevertheless, publishes a proxy of GOFO that appears to be highly correlated to the historical LBMA-GOFO.

What Happened with GOFO, the Gold Market and the Dollar Market in 2008?

Now getting back at our initial question: what was the cause of the drop in gold prices in 2008?

We can finally bring together the pieces of the puzzle. When the crisis erupted in 2007, banks had to tighten their reins severely. They ended up in severe liquidity problems and needed dollar liquidity. Yet, a large share of their assets were invested in long-term investments such as 30-year mortgages. When banks discovered that they ran out of eligible collateral for central bank emergency loans, while at the same time the interbank market completely dried up, they had to find other makeshift solutions.

And one of these makeshift solutions was, you might have guessed by now, “borrowing” gold and selling it on the market to obtain the required dollar liquidity. As a result, GOFO turned negative and the supply of gold in the spot market skyrocketed. Either way, that gold ultimately came from central banks and in some cases from international bodies such as the BIS. The gold price, in stark contrast to what many investors expected, dropped by over 20% because of this (temporary) fire sale of borrowed gold.

Not only did central banks play an important role, it is also a well-known fact that the interbank market dried up and that the mutual trust between commercial banks dropped to an all-time low. This can be viewed as a consequence of, for instance, “repo failures” (reverse repurchase agreements that due to one of the parties involved failed either by failing to repay the loan or to give back the collateral): Hense,gold. 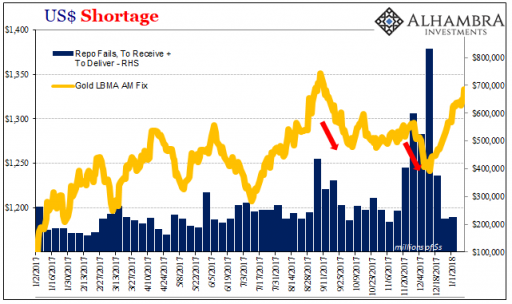 Repo fails were a big problem in 2008. Also more recently, at the end of 2017, did the fail rate go up sharply: a bad signal, since it means that the interbank market is drying up and is becoming riskier. Source: Alhambra Investments

Will Gold Prices Fall in the Next Crisis?

Great, you might think. If this is the case, then I can just as in 2008 wait until we are deeply in a crisis before I even should consider investing in gold. But this idea, in my view, will not be valid this time around.

However, ever since the 2008 recession, central banks have expanded the list of eligible assets enormously. As a joke, we could even say that the ECB even accepts the mothers in law of Europe´s bankers as collateral for an emergency loan. What a difference with the bills of exchange that circled on Lombard Street in a distant past!

Do not account on the fact that gold prices will fall half a year before they begin to rise. This time around, things might develop in a completely different way. If, however, gold prices do fall first, do not panic. You will know why gold prices are falling, despite the fact that the world is on the brink of collapse. It should even be a signal to take advantage of the temporal discount in gold prices to buy even more gold.