The euro has been strong recently. The EUR/USD rate shot up to a two-year high, to a level of 1.21. But not only the euro has been “strong” against the dollar. Better said, the recent euro strength can for the most part be explained by recent dollar weakness. The gold price in dollars went up as a result, even exceeding $1300 per troy ounce, but gold prices for investors in the Eurozone have remained mostly flat. Where is the EURUSD heading next?

As you can see in the below chart, the recent rise in the EUR/USD rate has been largely due to a weak dollar. After all, the euro performed considerably worse against most other currencies. The Canadian dollar, the Japanese yen and the Swiss franc actually appreciated relative to the euro, while the Australian dollar dropped slightly.

Speculation against the Dollar at Record Highs

Whereas the “long dollar” trade was one of the most popular trades until recently, the sentiment has completely reversed: right now, the “short dollar” is the most crowded trade of the moment. Observe the following chart:

This graph shows the net longs among speculators on the futures markets for dollars. On a futures market, there can never exist, on the whole, more longs than shorts, simply because every contract has both sides out of logical necessity. We can, however, make a distinction between the “speculative” traders and “hedge” (commercial) traders, who for instance buy or sell futures to hedge price risk that m might arise in their international commerce. Relative to one another, they can be “net long” or “net short”.

In the above chart we can observe that, in net terms, speculative traders are massively short the dollar. The last time that there was so much downward speculation on the dollar, was in 2013.

As veteran investor Jim Rogers would say: when everybody is on one side of the boat, it might be smart to move to the other side of the boat. And this advice is especially applicable in this case: the “short dollar” trade is too popular and too crowded, which is often an indication that the tide will turn rather sooner than later.

Speaking about market sentiment: for instance, read this Bloomberg article, which says the following: “[The euro], which broke above the psychological $1.20 level for the first time since January 2015 on Tuesday, may see some profit taking in the near term, but banks have no doubts its trajectory remains bullish going forward.” Banks have “no doubts” that the euro will continue to strengthen against the dollar. That “no doubts” are two very dangerous words in the ever-shifting sands of financial markets. When everything agrees that the obvious will happen, normally the exact opposite tends to happen.

The fundamental motive why the dollar will strengthen over time is the following: the interest rate differentials between the US and other economic currency blocs such as the Eurozone are that large that at a certain point in time the tide is bound to turn.

Take a look at the following chart: 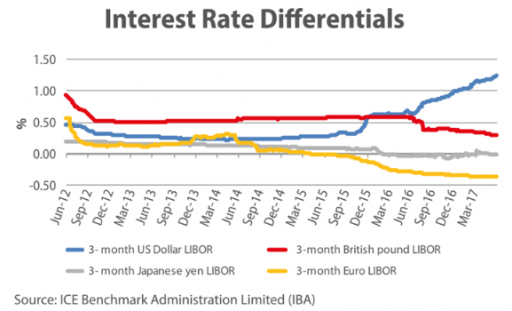 Here we observe that the dollar LIBOR rate is on the rise, while the LIBOR rate in other currencies is declining. And a higher interest rate attracts capital from places where rates and returns are lower.

Also take a look at the following chart, courtesy of Deutsche Bank: 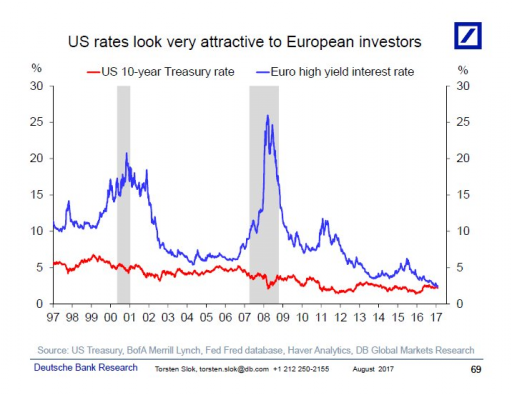 Deutsche Bank has taken the yield on 10-year US Treasuries (which are considered “risk free” assets) and the yield on risky Eurozone bonds. Oddly, for the first time ever, the yield on the latter has exceeded the yield on US sovereign debt. How is that possible?

And rate hikes in the Eurozone? That is a scenario which we can, for the moment, completely rule out. Headlines in the financial press are already prophetically saying: “The ECB is wrestling with strong euro”. And last week, ECB Chair Mario Draghi announced that interest rates and the large-scale asset purchases (better known as QE) will remain unchanged (remember: announcing a tapering of the large-scale asset purchases would amount to future rate hikes as it would be the first step toward normalizing monetary policy). In other words, the low rates in the Eurozone will remain low for quite a while longer.

On the other side: the odds of further rate hikes in the US seem to be quite high. Observe in the following table what the odds are, according to the market, that the Fed raises rates in the near future:

And markets might actually be underestimating the odds of further rate hikes in the near future.

On a side note: the vice-chair of the Fed, Stanley Fischer, announced he will be resigning in November, which was something everyone already more or less expected. This implies that Donald Trump has the unique possibility to appoint four new Fed board members in a board of seven, among which the position of Fed Chair (the replacement of Janet Yellen).

The winds seem to blow rather favorable for the US dollar.

But there has to be an event which triggers a reversal in the EUR/USD rate. Just like a company´s share price requires a trigger to move to its fundamental value, a catalysator is necessary to achieve a reversal in the recent trend (a weak dollar). In the case of a company, some clear and obvious examples are: the sale or liquidation of a company (takeovers, mergers, acquisitions and bankruptcy liquidations), the sale of part of the company (spin-offs), quarterly earnings which surprise on the upside, the announcement of new important contracts, winning litigation cases or avoiding large fines (Deutsche Bank, Volkswagen and BP are recent examples), etc.

What could be the catalysator or trigger of a reversal in tend of the EUR/USD rate?

According to my quick judgment:

We will see what the trigger will be, but whatever the trigger turns out to be: I am fairly confident that the dollar will appreciate in the foreseeable future against the euro, and not the other way around.
Share this article