The past weeks were the weeks of the recovery in gold prices and the dollar. The EUR/USD rate went up from 1.08 to 1.12, while the gold price went from $1,220 to $1,260 per troy ounce, somewhat in the neighborhood of where gold prices stood a month earlier. After having written frequently about the course of the gold price and the dollar in the past, it might be a good moment to take a step back for a brief update.

The fact that we are in a debt bubble might not be a surprise for you. Better yet, it should be the main reason for your investment in gold. Debts are enormous, many times larger than before 2008, and that does not bode well for the future.

So, how likely is a recession this year?

We will have to wait and see. In the first quarter of this year, US economic growth slowed down to a rather poor 0.7%. We have observed a similar slowdown in growth in other first quarters of previous years, but these disappointing first quarters were generally followed by a recovery in growth in the second quarter.

What else is there to say?

That low interest rates and the Fed´s yield curve manipulation will lead inevitably to a new recession, because they mislead entrepreneurs to invest in the wrong projects.

But when will this logically unavoidable recession hit? 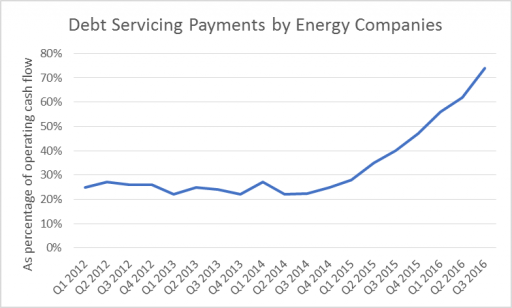 More than 70% of the operational cash flows generated by energy companies went straight to the repayment of debt and interest payments. As recent as two years ago, however, this percentage was still below 30%.

This is a warning sign for the future of the US economy. With higher interest rates, company executives will be faced with higher financing costs: the most leveraged companies will kick the bucket.

If interest rates keep rising, then we could observe the adverse consequences of higher rates within twelve months.

On the other side, various indicators show that a recession is not likely in the near future. Major US banks are exceedingly mismatching maturities of assets and liabilities: they are lending at longer durations with short-term borrowing (typically demand deposits).

Even the dollar will decline and rebound in these circumstances within a certain range. We could say the EURUSD could rise to 1.15. Yet, no fundamental factors exist to push EURUSD up further. The dollar will gain slowly in strength and continue its upward path and reach a climax (a dollar bubble) when the US economy (or world economy) falls in shambles.

The gold price will, just like it did in 2008, truly rise when it becomes clear that at the onset of a recession the solutions will be painful.

In the current sideways market it is a question of being patient. The fact that our patience is being put to the test, is only a sign of generous future reward. The returns on long-term investments are generally earned in relatively short periods of time. And that will be, in this case, no different. The alternative is to try to “time” the market and miss the ride up.