In our most recent seminar, I mentioned that Greece would not be able to make its due payment to the IMF without the help of European taxpayers. Last Thursday, the Greek Prime Minister – Alexis Tsipras – admitted that he would be unable to make the payment; Greece has run out of money. What will happen next?

Alexis Tsipras also provoked Jeroen Dijsselbloem, the Dutch Minister of Finance and current President of the Board of Governors of the European Stability Mechanism, on Twitter. Tsipras mentioned that the Greek government would "not accept extreme proposals," indirectly condemning the European negotiators. Furthermore, he stated that "our people have suffered enough during the past five years.

Despite these bold statements, Prime Minister Tsipras is actually quite willing to make an agreement. However, he is under severe pressure of fellow party members, who are already demanding new elections.

This became painfully clear when the Greek Minister of Finance Varoufakis blatantly rejected the proposal for financial support. In sum, Tsipras is having a hard time reconciling the wishes of his party members with those of the negotiators in Brussels.

Last Thursday, IMF Managing Director Christine Lagarde said that she was assured that Greece would make Friday’s 'critical repayment.' After the negotiations between Greece and the European creditors, she stated that Greece ''clearly demonstrated significant flexibility'' during the talks.

In other words, only twenty-four hours before Greece ducked the IMF payment by 'bundling' them, Christine Lagarde still denied this in every possible way.

However, I had already received the news that Greece would 'bundle' its payments last week. This 'bundling' is basically a deferral of payment; something that had never occurred in IMF history. Ultimately, the IMF permitted this bundling of payments. Greece now has to pay the four due payments all at once by the end of June, amounting to a total of about €1.8 billion.

Without financial support Greece will, just like it did past Friday, lack the funds to pay.

Dijsselbloem and Tsipras are now trying to reach an agreement for financial support before the 14th of June.

Since 2009, capital has been flowing out of Greece. Checking account holders do not trust the Greek banks, and are collectively transferring their funds abroad. The situation calmed down in 2012, and the period 2012-14 was a period of recovery in which funds were no longer being transferred by the billions. But since 2014, the outflow of capital has entered into a second stage.

The capital outflow will only continue to accelerate. The Greek banks are walking on thin ice and are highly vulnerable to changes on the capital markets. After all, banks can finance themselves in a variety of ways, but a withdrawal of significant part of their checking accounts makes banks dependent on the interbank market and the central bank.

Rising interest rates can therefore put banks into immediate trouble. Part of the financial support will therefore have to go to the Greek banks.

There are some people who talk about foreign currency or capital controls, but I do not expect such measures to be taken in Greece as long as Greece stays in the Eurozone. In case of a return to the Drachma, the Greek banks will close in what will be an ‘Argentina-like’ scenario. 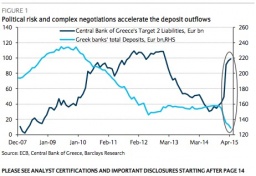 Sooner or Later, the Bill Must Be Paid

Sooner or later, European tax payers will be faced with the bill. Let’s take a look at the financial obligations of the Greek government: not only of this month, but also of the coming years.

In sum, even if an agreement were to be reached, we will be faced with exactly the same scenario next year (or even earlier if interest rates were to rise). Money given to Greece is money down the drain. That’s not a populist statement, but a solid conclusion based on the amount and structure of the Greek national debt, tax receipts and the possibilities to enlarge them.

As I wrote earlier, I think that we will not reach judgment day for quite a while. Alexis Tsipras will continue to reach agreements and more money will go to Greece, creating a continuous circle.

As a result, gold may very well drop to $1,100/oz in the coming month; a warning that I gave earlier. That doesn’t necessarily mean that buying gold right now is a bad idea for European investors. After all, the exchange rate of the euro is also volatile and unpredictable in the short run.

After Mario Draghi announced the biggest ECB stimulus program in history, interest rates in the Eurozone dropped to absurd lows. Interest rates on Italian and Spanish government bonds have never been this low. Interest rates on Dutch savings accounts dropped below 1%, the lowest rate in 500 years.

But something has changed.

I have never seen this much volatility.

Earlier this year, I warned you for this. It was one of the very few predictions that I made (I don’t believe in price targets).

But 2015 is the year of immense volatility on forex and bond markets, and the events in the Netherlands past week were unprecedented. Interest rates are rising, which is not just a bad sign for Draghi. It also means that he has lost all control.

On the latest ECB press conference, Mario Draghi criticized pension funds. Plagued by the ECB’s zero-percent interest rates that are currently wrecking the financial markets, pension fund managers blamed the central bank. But their complaints are unjustified according to Draghi.

I found Mario Draghi’s response to be telling. He said to "go find your yield elsewhere, it is not my problem." He suggested that, under current conditions, pension funds should perhaps invest in more risky assets. But that doesn’t alter the fact that Mario Draghi responsible for the current 'abnormality.' Moreover, everyone but the central bankers knows that a return to ‘normality’ will be painful.