The last few years have been rather average for gold investors. The gold price tanked in 2013 and ever since the gold price has been mostly moving sideways, fluctuating between €950 and €1100 per troy ounce. Valuing a company is tough, but the basic valuation principles are crystal clear: you value a company by taking the present value of all its future (net) cash flows. The principles of valuation are equally clear in the case of everyday commodities, such as wheat and crude oil, for which a demand and supply analysis will do the trick. But how do you value gold? Deutsche Bank tried eleven ways and reached eleven different conclusions. The German bank arrived at an average valuation of $1,015 per troy ounce (about €900), but with outliers on both extremes.

Gold as Store of Value

Deutsche Bank ventured to do the impossible (value gold in a more or less rational way) and grouped its attempts in three (or perhaps four) categories. How do you value gold as:

“A store of value is any form of wealth that maintains its value without depreciating.”

From this point of view, how could we value gold?

The economists of the Deutsche Bank thought of the following: take the evolution of the (nominal) gold price and correct it for inflation by using the Consumer Price Index (CPI) and the Producer Price Index (PPI). Then take an average to see how far the current gold price is removed from that historical average: 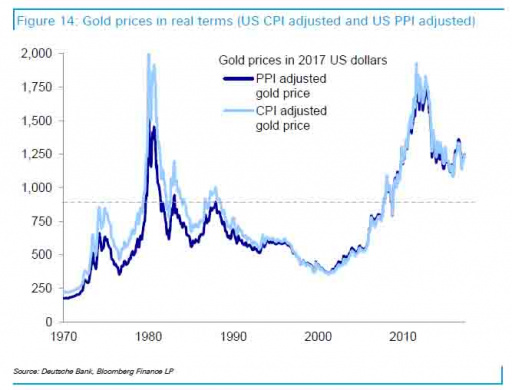 Here we arrive at the conclusion that gold as store of value, when we adjust the gold price for changes in the consumer and producer price index, is seriously overvalued. According to this “quick and dirty” valuation method, gold is overvalued by forty-two (PPI) or thirty-six (CPI) percent.

We could, of course, easily find fault with this valuation method. The past plays no role in the art of security valuation. When we value a company, for instance, we look at future cash flows, not historical cash flows. When we value a commodity, we look at future supply and demand, not historical supply and demand. To make a sound comparison with gold, we should take future inflation into account. Deutsche Bank does exactly the opposite: they value gold as store of value using historical inflation data.

If we compare the changes in the gold price against inflation expectations for the next five years (we can deduce the expected inflation rate by taking the yield on US Treasuries and contrast it against the so-called Treasury Inflation Protected Securities, or simply TIPS, of which the yield is pegged to the US CPI inflation rate), the current gold price suddenly appears remarkably near its “fair value.”

Deutsche Bank, however, thought of two other valuation methods:

How does gold appears to be valued when we take a closer look at these two indicators?

These both valuation metrics are, nevertheless, suspicious to say the least. Today, we spend less on food relative to income, but would that be a good method of trying to value a commodity like wheat? Of course not. And we could compare the historical evolution of the stock price of IBM with the stock price of Exxon over the past thirty years, but would that tell us anything about the fundamental value of both companies? The answer is, again, of course not.

Gold as Medium of Exchange

This is perhaps the most interesting attempt by Deutsche Bank. Central banks still hold gold to a large degree on their balance sheets. A strong argument can be made for the idea that central banks still sue gold as ultimate medium of exchange. We can quote de analysts of Deutsche Bank summarizing this idea in the following words:

“If the rate at which fiat currencies have been printed exceeds that rate at which gold has been mined, then ceteris paribus, gold should become scarcer and rerate versus fiat currencies. Since 2005, central bank balance sheets have expanded nearly fourfold. In contrast the global above ground stocks of gold have expanded a mere 20%. The gold price has rerated accordingly, but not enough to keep the value of gold at parity with the global (big four central banks to be precise) money stock. The average ratio since 2005 between global money stocks and the value of global gold stocks is c.1.8x. In order for gold to get back to this level, the price should appreciate to USD1,648/oz, nearly USD300/oz above the current spot price.”

Briefly summarized: if more fiat currency (central bank liabilities) is in circulation than gold, then the medium of exchange gold should, all other things equal, increase in price against the fiat currency.

According to this indicator, gold is undervalued by 30%. And this is most likely in line with what many investors in gold intend to achieve with their gold investment: protect themselves against the failures of Western central banks, which are jointly involved in the biggest monetary experiment in world history. 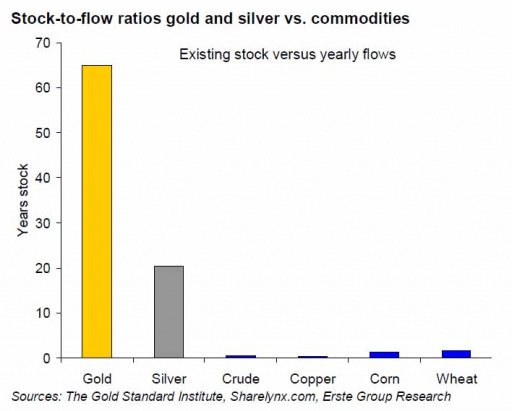 Since gold (and to a lesser extent, silver) are no everyday commodities, any attempt to value gold using vanilla demand and supply analyses is ridiculous.

Whenever you read a report that forecasts higher gold prices because the production of gold is slowing down, you should immediately put that report out with the garbage, burn the garbage bin, and safely dispose of the ashes. The report’s analyst has committed a capital sin: he or she analyzes gold as if it were an everyday commodity.

The last three attempts of Deutsche Bank to value gold are therefore pointless. They compare the gold price against the copper price, against the global production cost curve, and against the oil price.

When compared against the copper price, the current gold price appears to be overvalued by 24%. But that cannot be attributed to gold, but to the fact that copper prices have dropped substantially in response to a decrease in demand from China, the country that was largely responsible for the preceding price increase of copper. Copper prices are a more effective guide to the state of the Chinese economy than to future gold prices.

When compared against the oil price, the current gold price seems to be overvalued by 34%. But that cannot be attributed, as was the case with copper prices, to gold, but to the fact that oil prices have dropped significantly in response to increasing US shale oil production, a recent supply glut and excess oil stocks, and a drop in the average production costs. The oil price is a better reflection of a fundamental shift of the dynamics in the oil industry than of future gold prices.

When compared against the production costs of gold (the marginal production cost curve), the gold price seems to be overvalued by a tiny 2%. But Deutsche Bank is making another mistake. The average production costs to extract a troy ounce of gold from the earth will, after all, always move in line with the current gold price.

This has everything to do with the fact that marginal gold producers begin to produce when prices rise. Let us assume that we have the following gold producers:

Let us assume that the current gold price is $760 dollar per troy ounce. That means that both Bill and Anna are not profitable and will not produce gold. Ergo, with a gold price of $760 dollar, the average cost price is $625 dollar.

Thankfully, Deutsche Bank included a warning for the very same reason (“Beware of trying to glean spurious support levels, costs adjust to the price”, they wrote). But why even bother? Flawed is flawed no matter what you do.

I will probably follow this article up with a sequel. One of these days I will introduce an alternative valuation method to value gold.