Two weeks ago, the Trump administration presented a detailed version of one of Trump’s most important election promises: a tax reform. Not only does the Trump administration propose to lower corporate taxes, their proposal also includes other tax reforms. However, the trouble is that Trump wants to lower taxes without cutting spending. As a result, the budget deficit and the enormous public debt are bound to swell. And, moreover, what does all this have to do with the Federal Reserve?

A Breakdown of Trump’s Tax Proposal

The tax reform is bound to be costly. Not only in the first year but also in the years following.

Of course, we all know (or ought to know) that countries with low taxes experience higher economic growth than countries with a higher tax burden. It is perfectly imaginable, therefore, that total tax revenues go up, while at the same time taxes are being lowered. When there exists more economic activity and more value is added, the tax base increases. Trump, in his enthusiasm, thinks he will be able to finance the entire tax reduction with mere economic growth, but that seems to be a stretch.

What Trump is implicitly referring to, is the Laffer curve: 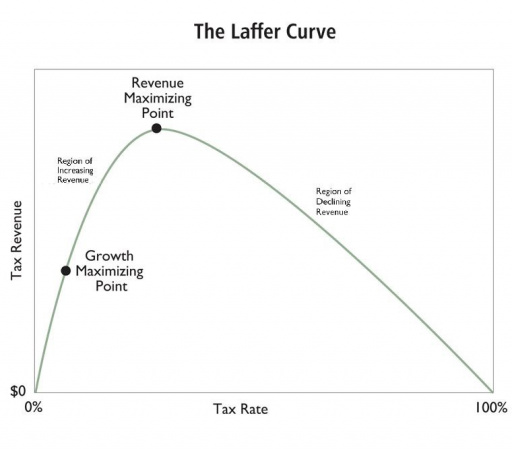 The story behind the Laffer curve is quite remarkable. According to the story, the (until that moment relatively unknown) economist Arthur Laffer tried to convince the former Chief of Staff, Donald Rumsfeld, that the proposed tax increase by the president at that time, Gerald Ford, was a bad idea. Laffer argued that the tax rate was already beyond its “optimum” (the “Revenue Maximizing Point” in above chart). A tax increase would therefore not result in more, but less tax revenues. On the spot, Laffer improvised and used a napkin to draw the now famous Laffer curve to convince Rumsfeld. Laffer was unable to persuade Rumsfeld, but the napkin did later turn into a museum piece.

Trump now argues precisely the same as Arthur Laffer did in the 1970s. But in contrast to Laffer, Trump uses the same argument in support of a tax reduction, rather than to avoid a tax increase. A tax reduction would bring us closer to the “optimum” and therefore increase total tax revenues, according to Trump.

This all seems perfectly reasonable, but ends up being a complete speculative guess. The shape of the Laffer curve cannot be derived from anything or anywhere, since the necessary data is by all means unobservable. And it is even less realistic to assume that, if we do not even know the shape of the curve, we are able to figure out at what point of the curve we currently find ourselves.

According to my (fallible) judgment, it seems more likely that we are somewhere between the “Revenue Maximizing Point” (the optimum for tax revenues) and the “Growth Maximizing Point” (the optimal point for economic growth). Yes, lower taxes can lead to higher economic growth. Capital investments become more tempting and marginal investments suddenly become profitable at a lower tax rate; capital accumulation is incentivized. But this does not mean that this increase in economic growth is able to finance the tax reduction; tax revenues will go down rather than up.

Consequences for the Deficit and Public Debt

The Urban-Brookings Tax Policy Center (TPC) apparently agrees with me. They estimated the impact of Trump’s tax proposal on the budget deficit for the next ten years. They also took into account the projected economic growth (real GDP growth).

I took these estimates and compared them with the baseline projections of the Congressional Budget Office (CBO), which (for the moment) does not take into account a possible tax reform.

You can see the result below: 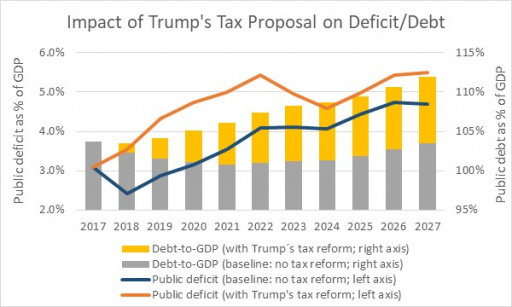 In this chart, we observe that both the federal deficit (as percentage of GDP) and total public debt (as percentage of GDP) turn out to be considerably higher with Trump’s proposed tax plan. In 2018, the federal deficit would amount to 3.5% of GDP, instead of 2.4% without any tax reform. But also in later years, the impact on public finances remains rather negative. To such a degree, that after ten years total public debt does not amount to 103% of GDP, but 111% of GDP, despite the fact that GDP will be considerably higher than in the absence of any tax reform.

Consequences for the Fed and Inflation?

In short, the deficit and debt will only increase at an even faster pace, but why is this relevant to investors?

The reason why is easy to grasp. A large share of the Fed’s balance sheet consists of long-term public debt. These long-dated US Treasuries depend to a large degree on the creditworthiness of the US government. And Moody’s already took aim at the proposed tax reform and reached the conclusion that Trump’s proposal “would probably weigh on the U.S. government’s credit outlook, on concerns that it would cause the federal deficit to swell”, as we can read at Bloomberg.

A lower credit rating would mean that yields on US Treasuries might rise in the mid- and long-term and that the odds of an eventual default will mount. And this, in turn, means that the assets which back the US dollar (in this case, long-dated US Treasuries) will deteriorate. The quality of the dollar will decay, which will impact the demand for dollars and as such the value of the dollar in the medium term.

Trump is apparently willing to sacrifice future for present growth on the back of the American taxpayer. Perhaps his proposal to allow immediate depreciation of capital expenditures for the next five years (conveniently, give and take his presidential term) is more revealing than many commentators currently think. As if he were a veteran in politics, Trump is trying to maximize short-term gain at the expense of long-term downside.

[1]  Interested readers can access the entire report A Preliminary Analysis of the Unified Framework (“Unified Framework for Fixing Our Broken Tax Code”), published by the Tax Policy Center (TPC) of the Urban Institute & Brookings Institution, at: http://www.taxpolicycenter.org
Share this article