Recently, author and former trader Nassim Taleb published his latest book Skin in the Game. He is widely praised for his previous bestsellers, The Black Swan and Antifragility. Nassim Taleb has a decades-long track record as a pit trader (as early as in the 1980s). Two months ago, I had the pleasure to spend an entire week with this controversial and no-nonsense thinker. What are some of the lessons that we can draw from Taleb’s work as gold investors and what did he have to say about gold? (The answer to the latter question is not something you will find in his books or elsewhere.)

According to Taleb, any “thing” can be classified according to one of three categories: fragile, robust and antifragile. Fragile is something that suffers from volatility. To robust things, volatility does no harm and frankly it could not care less about volatility. Antifragile things, on the contrary, gain from volatility.

Let us use a few examples to understand the concept of antifragility better. Take, for example, a porcelain tea cup. A porcelain tea cup does not like volatility, uncertainty, change, disorder, variation, etcetera. A porcelain tea cup just wants to rest in a glass cabinet, protected against any possible element of surprise. If we would compare the porcelain tea cup to a financial asset, we could for example consider (some) bonds or a mortgage loan portfolio of a commercial bank. Every month, the bank receives interest on its mortgages. But the risk that a subset of mortgage loans go bad is present and even quite large given the existence of the business cycle. On top of that, many mortgage owners are able to refinance when interest rates drop (significantly), but this is not the case the other way around. Whenever interest rates rise, the bank cannot force a family with a 30-year fixed rate into a higher rate mortgage. Both the tea cup and the mortgage portfolio are fragile. They dislike volatility.

The opposite of fragile is not robust. Volatility does not harm nor benefit the robust. If our tea cup was of steel rather than porcelain, we could call it rightly a robust tea cup. Robust, in financial markets, are perhaps U.S. government bonds (or, according to a Dutch fund manager, Dutch/Swiss government bonds). Gold can also be ranked among robust financial assets. Gold is robust (in a financial rather than a physical sense). You will never earn 50 times your initial investment or join the ranks of the rich in the Forbes 400 list by investing in gold,, but you will never really buy a pig in a poke either (2013 was by far the worst year for gold investors ever, but given the recovery after 2013 even 2013 pales in comparison with an investment in, say, Enron). Moreover, gold protects against extreme (monetary) events and remains reliably stable even when the world seems on the verge of complete collapse.

But take now, at the other extreme, capitalism or a market economy: mistakes – say the bankruptcy of one single company – are able to make the system stronger. Hence, free-market capitalism is antifragile. First, because bankruptcies provide important information to surviving companies, but moreover because bankruptcies are a way to “weed out” the bad and ugly. Many natural (not-manmade) ecosystems are also antifragile. Take the human body for instance: some stress and volatility are fine to keep muscles strong. Or to take another financial example: out-of-the-money put option strategies or venture capital. Many small bets of which the downside has been limited upfront that have an almost unlimited and unbounded upside. Look, for instance, at the venture capital firm Sequoia Capital: Sequoia Capital invested in an early stage in WhatsApp. A grand total of $60 million was (gradually over time) invested in the company. Eventually, Facebook would acquire the company for $19 billion dollar, of which $3 billion went to Sequoia, fifty times their original investment.

In short, in Taleb’s own words: “The fragile wants tranquility, the antifragile grows from disorder, and the robust doesn't care too much.” 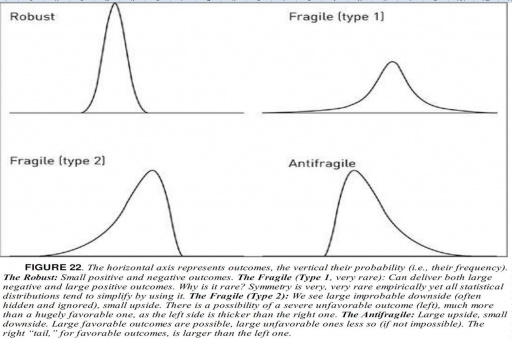 The result of our above classification of investments (robust, fragile and antifragile) led Taleb to his “barbell portfolio strategy.” The idea is pretty straightforward: avoid all fragile investments, invest a fixed yet small percentage of your portfolio in extremely risky assets (for instance, out of the money put options, venture capital or start-ups), say 10%, and invest the remaining 90% in robust and extremely safe assets.

So, what are examples of such “safe assets”? In what does Taleb invest this safe 90% himself?

An even bigger part in the US government debt (US Treasuries).

And partly in gold.

As I had the opportunity to directly question Taleb on gold, he told me truly despises gold. He hates gold. He couldn’t care less about the gold market. Yet Taleb does invest a large share of his “safe assets” in physical gold. Gold is the robust investment par excellence. In case the global economy is on the verge of collapse, gold will keep afloat and survive. Or things might go great, but even then an investment in gold will not result in enormous, unrecoverable losses and ruin. Or as some gold investors rightly remark: for a more or less regular gold coin you could buy hundreds of liters of wine centuries ago and for the value of a similar coin in present times that probably still holds true. Taleb calls this the Lindy effect: gold has been a store of value for, according to some accounts, 4,000 years. We can reasonably expect gold, therefore, to continue to be a store of value for the next 4,000 years.

Taleb’s “Barbell Strategy”: take the extremes rather than the middle: invest a large part of your portfolio in extremely safe, robust investments and a smaller part in risky but potentially very profitable investments.