Last week on Monday, the Dow Jones index lost more than a thousand points for the first time in history, a drop of 4.6%. This correction followed a decline in stock prices that had already started on the Friday before, although few investors had anticipated that the index would fall by this much. On Tuesday and Wednesday, stock prices seemed to recover somewhat, but on Thursday the most important indices in the United States fell again considerably.

Last week’s correction seems dramatic, but we should not forget that it comes off the back of an exceptional rise in January. At the time of writing, the Dow Jones is around 24,000 points, the same level as at the end of November last year. The broad S&P 500 index closed at just below 2,600 points on Thursday, which is also comparable to the level of just over two months ago.

We cannot speak of a huge panic, but the big question is how to go from here. Was this just a small correction in an upward trend? Or are stock prices heading down even further this year? Just like you, I do not have a crystal ball and cannot give investment advice either. Yet when I look at different indicators, the second option seems more likely to me at the moment. I will highlight a number of reasons why I think so.

Ever since the onset of the financial crisis and the intervention by central banks, the yield on government bonds has fallen sharply, even reaching negative levels in 2016. In the wake of government bonds, corporate bond yields also fell, especially when central banks started to purchase this type of debt.

For investors, government bonds were the safe choice in recent years, but one with little to no return. If you were prepared to take more risks, then the stock market was an obvious choice. Not only because stocks can benefit more than bonds from a recovering economy, but also because the average dividend yield was higher than the yield on bonds. Stocks were simply more attractive for most investors. Until interest rates began to rise again and the return on 2-year US Treasuries began exceeding the average dividend yield on all shares listed on the S&P 500.

For the first time since the beginning of the financial crisis of 2008, bonds have become an attractive alternative again, which suddenly makes the preference for stocks no longer as obvious. Add additional interest rate hikes by various important central banks and you have a recipe that will turn out to be very unfavorable for the stock market. 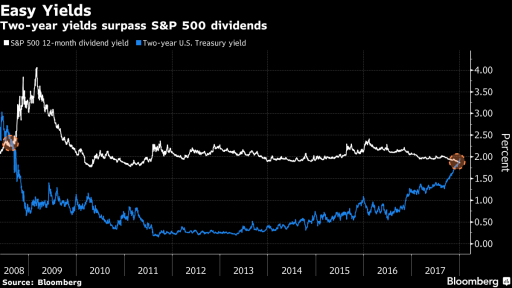 The yield on US Treasuries exceeds dividend yields for the first time since 2008 (source: Bloomberg)

But Isn’t the Economy Growing Again?

A growing economy can have a favorable impact on the stock market, because the underlying companies can sell more products and possibly increase their profit margins. But at the same time, economic growth is also accompanied by negative effects, such as rising wages and inflation. Hence, the question is which of these effects will prevail.

To date, share prices have largely responded to the positive effects of economic growth, but there is a time when companies are no longer able to meet investors' high expectations and inflation and rising wages will begin to weigh on earnings.

The Stock Market Is Overvalued

Before stock prices came crashing down, there were already several signs that stocks were in “overvalued” territory. For example, the price/earnings ratio of companies in the S&P 500 rose to levels not seen since the Dotcom bubble. Other signs are the strong growth in the number of brokerage accounts over the past year and the number of ads on investing. These are also traditional indicators that are pointing to a market peak.

Price/earnings ratios rose to their highest level since the Dotcom bubble (source: Multipl)

After years of monetary stimulus, central banks are forced to put their foot on the brake, in order to prevent stronger economic growth from turning into uncontrollably high inflation. The Federal Reserve is already planning to raise interest rates this year and Mark Carney of the Bank of England suggested last week that interest rates cannot remain behind in the case of strong economic growth.