Jokes abound about economists, but one is particularly relevant to our article of today. A retired economics professor is back at the university where he studied and used to teach for his 50-year class reunion. He asks if he could see the current economics exam. After a little while, he receives the most recent version of the economics exam from a faculty member. He scans carefully through the exam, looks up somewhat surprised, and utters: “But this is exactly
the same exam that I wrote almost 50 years ago!” “Yes,” responds the faculty member, “the exam is exactly the same, but all the answers are different!”

The Dominant Doctrine at the Fed

The Federal Reserve has been marked by different periods. In a relatively recent past (the late 70s), the central bank was largely swayed by the ideas of the influential monetarist Milton Friedman. The Fed, in the footsteps of Friedman´s studies, focused itself on the money supply. The “quantitativist” Friedman pointed at the money supply as culprit of inflation. In the 90s, in the winter of his life, Friedman´s ideas gradually fell out of favor. The money supply rose, but inflation was nowhere to be found.

The ideas of another influential economist, John Maynard Keynes (whose ideas Friedman tried to refute), made a silent comeback.

According to the Neo-Keynesian doctrine that has dictated the Fed ever since Friedman´s theories fell out of favor, no inflation can arise as long as there are idle resources in the economy. Workers without jobs, for instance. They are “idle resources.” Just like the production plants that are producing at half their capacity. They are “idle resources” as well. It is the task, according to this doctrine, of the central bank – the Fed – to fire up the economy and bring these “idle resources” back to producing at full capacity. Terms such as “full employment”, potential GDP, the Taylor rule and the output gap are often heard in these circles.

The output gap is simply the difference between what the economy produces and what it could – potentially – produce. In practice, this policy guideline boils down to an estimation of “potential” GDP and actual GDP.

There is a negative output gap whenever potential GDP exceeds actual GDP. This “idle” potential is a signal for the central bank to manipulate interest rates downward. On the other hand, inflation arises – according both the Neo-Keynesian theory and the Modern Monetar Theory (MMT) – when interest rates are too low and actual GDP temporarily outstrips the long-run potential or trajectory of GDP.

The “Neutral” or “Natural” Interest Rate

Whenever the output gap is positive or negative, it means that the Fed´s interest rate is above or below the “neutral” or “natural” interest rate. If the Fed-rate is exactly equal to the neutral rate, then there should be no idle resources (unemployment, for instance) or high inflation.

Central banks such as the Fed estimate the neutral rate and based on certain assumptions about the output gap, they calculate at which interest rate, according to their models, the output gap disappears.

Yet there is a circular argument rooted in this method. Policy makers think that they can estimate the neutral interest rate, because the assumptions of their models that they unleash on the data already contain their very conclusion. Moreover, policy makers use observable data as inputs for their models that, to begin with, are the very result of their earlier interventions. Only the market van discover the “neutral” rate by a process of trial and error, in which some are wiped out and others are rewarded with profits, while the Fed and other government agencies do not possess that ability.

But it becomes even worse: it is not only true that we cannot know what the current “neutral” rate is, but we cannot even know what the unobservable neutral was in the past! Assume that the Fed gradually raises interest rates (as currently is the case), and a recession ensues. A majority of Neo-Keynesians would cry out: “You shouldn´t have raised interest rates! The neutral interest rate was clearly lower than the Fed assumed and you guys raised rates to above that level.” But this is not necessarily the case. It is just as plausible that interest rates were too low for years that caused a bubble, which now inevitably bursts.

The Taylor rule was implemented in 1995 by the Fed. This policy guideline is named after the Neo-Keynesian John Taylor and embodies what we have discussed at the outset of this article.

Now the Taylor rule has never been followed completely. Decision making gentlemen (and lady) are always glad to have the final say on monetary policy. There is little reason for a Fed Chair to deliberately restrict him- or herself with a policy rule. It should be clear to anyone that a central banker prefers discretionary over rules-based monetary policy under any given circumstance. Also observe the following chart, courtesy of UFM Market Trends: 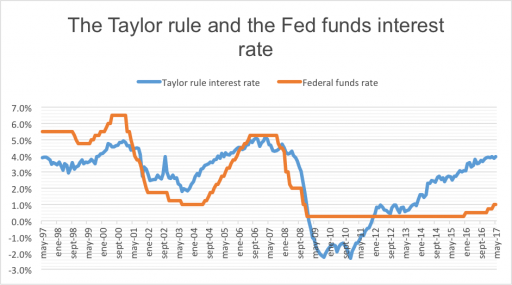 According to the Taylor rule, the Fed had to lower interest rates to negative after the 2008-recession, something the Fed was not willing to do. But since 2012, ever since the Taylor rule returned to recommending a positive Fed rate, the Taylor rule could easily be upheld.

That is clearly not the case. Over the past three decades (ever since adopting the Taylor rule and discarding the Friedman rule), the difference between the Taylor rule – which should be a proxy of the “neutral” interest rate – and the actual Fed-rate, has never been as high as now.

In brief, even if we follow the flawed models that we criticized earlier, the Fed-rate remains far behind the “neutral” interest rate. Put differently, even the Fed´s very own models indicate that interest rates are too low, causes or caused a bubble on financial markets, and that expected inflation is much higher than anyone possibly imagines at the moment.

The Fed Is Groping in the Dark

The present-day methodology of central banks is insane. Interest rates arise from a competitive process of price discovery in financial markets. The idea that experts from the Fed or ECB are able to determine the “optimal” interest rate, without that process of price discovery, is the equivalent of explaining away the economic information problem that market prices precisely attempt to solve.

As long as the Fed bases its policy decisions on some illusionary “neutral” interest rate, you should be deeply worried.