The World Bank, for example, shows that from 2003 to 2007 the worldwide annual average growth amounted to 1.8%. Moreover, we can observe the same trend across both developed and developing economies. Whatever the case, the trend is especially evident among developed economies. The developed economies grew at a rate of 3% up till the 2008 crisis but only a mere 0.4% after the crisis. Below a quick breakdown by economic region:

This is all the more remarkable, since in usual times a recession is directly followed by a period of strong economic growth. This is pretty logical, because economic growth comes from a lower base level. But this time around, after the 2008 crisis, things were quite different.

What is the cause behind this disappointing economic growth?

Businesses are reluctant to invest in fixed assets. Curiously, when a moderator sat at a conference filled with US-based CEOs alongside Gary Cohn, an economic advisor to Donald Trump and a proponent of the administration’s recent tax reform proposal, asked which of the CEOs were planning to increase capital spending as a result of the tax reform in a round of hands, almost none of them actually raised their hand. Trump’s right hand Gary Cohn laughed it off, but was more than anything surprised by the lack of hands.

We can observe the lack of CapEx also in the next chart, which shows the annual change in investment in (nonresidential) private fixed investment:

Above chart comes straight from the GDP report of the Bureau of Economic Analysis (BEA). Historically, capital investment (CapEx) has always been positive in times of positive economic growth. But about a year ago, something unexpected happened. CapEx was negative even though the economy was not in a recession. Since recently, growth in CapEx has been slightly positive, but is still way below its historical average (especially after the drop in CapEx during the crisis).

The current economic recovery is, therefore, still remarkably weak if we look at the willingness of companies to increase CapEx.

Businesses are skeptical about increasing capital spending, and as a result economic growth lags behind historical post-recession averages.

And all this despite the fact that interest rates stand at record lows. What is wrong? After all, these businesses do borrow money (businesses, for instance, issue corporate debt at a record rate); total debt levels continue to grow and corporate profits are peaking. But on what do businesses spend their money if it is not on CapEx?

In short, no CapEx, but what do businesses spend their money on? The answer to this question is briefly: they mostly return money to shareholders.

You have read it correctly. A large share of the purchases that are responsible for pushing up stock market prices are purchases by the very companies that issued these shares in the first place. The number of businesses that buy back shares stands at record highs. And the amount they buy back every month is unprecedented as well.

Also take a look at the chart below, which shows both the total amount of dividends paid and the number of shares bought back: 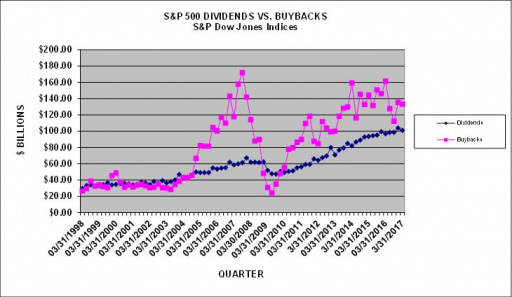 What can we conclude from this chart?

Simply that ever since the 2008 crisis, businesses have dedicated most of their excess cash to return money to their shareholders, by paying out dividends or by buying back shares (something which, in a simplified way, has the same consequences for shareholders).

Businesses spend less on CapEx than before (before the crisis), but currently spend record amounts on dividends and buying back shares.

Are we really surprised that economic growth, as a result, has never returned to pre-crisis levels?

And those same shareholders to whom the money is returned, in what are they supposed to invest their money? As a general rule, they invest in financial assets: as a result, we now have a bubble in fixed income assets (junk debt, etc.).

The conclusion is easy to grasp: businesses do not invest in capital, but do return in massive amounts money to shareholders. This means that we should continue to expect weak economic growth for the coming years and will not be able to reach pre-crisis growth levels.

And low economic growth, in combination with rising rates, means good news for gold prices for the coming years.