Bond yields of debt-ridden European countries have been falling recently in line with the gold price. Below the surface, however, things don’t look that pretty in Europe. ‘Bad’ bank loans as a percentage of total bank credit have been increasing in both Spain (13%) and Italy (8%), unemployment hasn’t improved, euro-scepticism is still on the rise, and capital is still fleei

Killing Volatility: The Euro Crisis Revisited and the Role of Gold

Bond yields of debt-ridden European countries have been falling recently in line with the gold price. Below the surface, however, things don’t look that pretty in Europe. ‘Bad’ bank loans as a percentage of total bank credit have been increasing in both Spain (13%) and Italy (8%), unemployment hasn’t improved, euro-scepticism is still on the rise, and capital is still fleeing from the peripheral countries.

While bond yields point to a rosy future for Europe, nothing could be further from the truth.European leaders are creating severe imbalances in the bond market with dire consequences. Yet, as ever, European politicians will be taken by surprise. At that point, gold will profit from this attempt to kill volatility by European leaders. 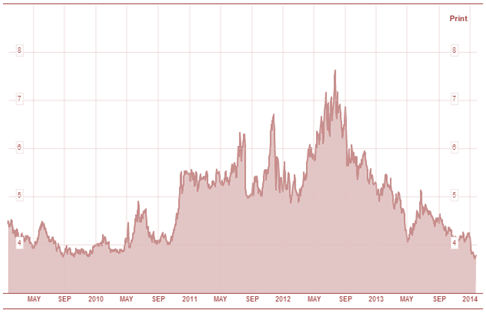 Draghi: Kicking the Can

We saw a radical shift in asset performance after ECB-chairman Draghi uttered the words “whatever it takes”. Both the Greek and Spanish stock market went up more than an astonishing 80% since that memorable summer in 2012 — when Draghi made his remarks. Italian and German stock markets soared 50%. Spanish 10 year bonds gained over 40% and their Italian equivalents gained more than 30%.

Of course, his pledge to expand his balance sheet indefinitely is nothing but kicking the can down the road. It is, again, an attempt to kill volatility at the expense of future fragility. It lowers bond yields, but leads to a further increase in indebtedness by European nation states. Higher debt takes a heavier toll on the fiscal budget when rates (even slightly) increase.

With an increasing debt burden — rather than addressing debt with actual spending cuts and fiscal austerity —changes in interest rate have devastating asymmetric consequences for the budget deficit and public debt.

A case in point is Japan. Low interest rates have lead to reckless government spending and a staggering Japanese public debt. As a result, a rate increase of a mere two percentage points raises total public debt with an astonishing 25% of GDP in ten years time. In other words, two extra percentage points adds $1 trillion USD to Japanese debt — $11,684 per Japanese citizen. Just as many European nations, Japan is on an unsustainable trajectory. Debt-ridden nations seem to resort to something they publicly despise: financial leverage, but this time directly with taxpayers' money. 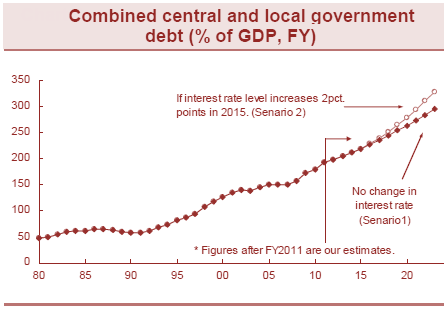 The impact of a rate increase of 2 percentage points on Japanese debt (source: BNP Paribas)

For Spain, Greece, Italy, France, Portugal and other countries the same principle applies: a little upside and an immense downside to interest rate volatility. Volatility in interest rates doesn’t benefit the majority of European nations; it harms them. They break when subjected to somewhat higher interest rate. 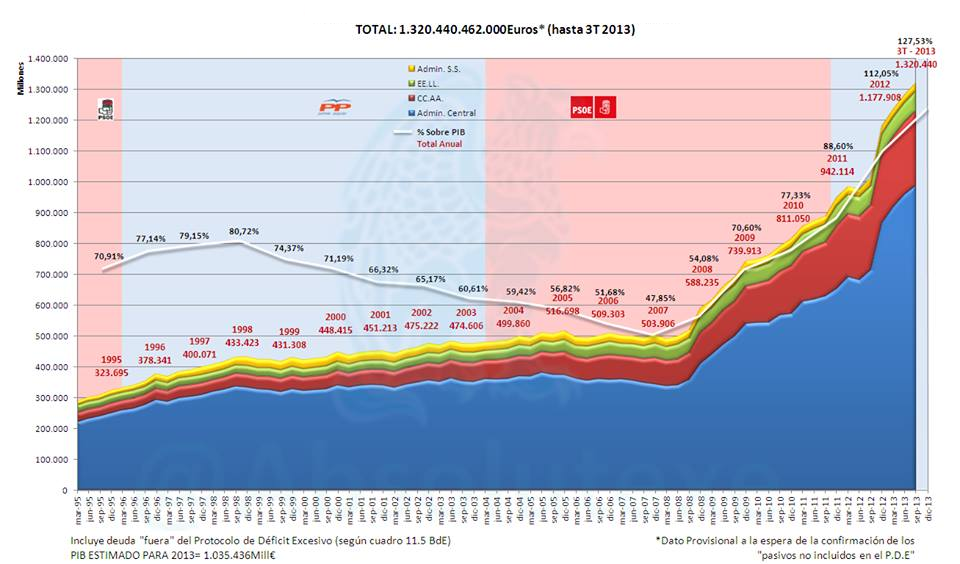 Gold and the Euro Crisis

As Spanish bond yields skyrocketed, the gold price reached its record high of almost $1,900 p/toz. It was precisely the exuberance of the rising euro yields that led to a massive flight into gold and pushed the gold price to record levels. But as the euro crisis seems resolved (for now), the gold price also retreated.

As you’ve seen, counter to conventional wisdom, the euro crisis is not over: we are just in the eye of the hurricane. We are piling up debt on debt and awaiting markets to foot the final bill.

Unwittingly European politicians have created a great disaster by preventing yields to rise by buying up debt through the central bank, by direct bail-outs by other countries, and by prohibiting short selling at any possible sign of lower bond prices. The result is that Spanish and Italian yields are now lower than even before the European debt crisis, yet the problem has only worsened: more debt, and more pain when the debt is due. And then, dear friends, the gold price will do exactly the same as in 2011: go up.