Since the demise of the Bretton Woods system in 1971, the world has become increasingly dependent on the US dollar. The US dollar continues to fulfill an important role as the world’s reserve currency and as a result the United States is basically obliged to provide the world with sufficient dollars.

In order to do so, the United States must import more goods every year than it exports. The difference is paid for in dollars; dollars that can then be used by other countries to import oil and other commodities. This worldwide dependence on the dollar has meant that the United States can structurally live far beyond its means. 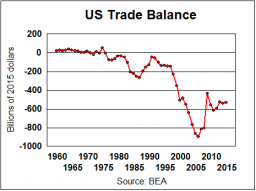 The United States has suffered a structural trade deficit since 1971. Source: BEA

The problem with this monetary system was already described in the fifties by an economist named Robert Triffin. He was one of the economists who foresaw early on that whenever a country´s currency is the world reserve currency, it must take on the task to supply the rest of the world with this currency. And that means that the country that issues the world reserve currency must have a structural trade deficit.

This monetary system based on the dollar as world reserve currency has caused ever greater imbalances over the years. For example, over the years, industrial production has for the most part moved abroad from the US to low-wage countries. In turn, these low-wage countries hold large dollar reserves to keep their currency from appreciating. This is explained somewhat dramatically - but largely correctly - in the documentary 'Death by China', which can be watched here on YouTube.

This form of globalization made products in the United States considerably cheaper, but it also meant that many well-paid jobs in the manufacturing industry were lost. Whereas the American economy was still largely responsible for investment and production right after the Second World War, its present-day economy now seems to be turning more and more toward consumption and debt accumulation.

Debt Is Not an Acute Problem

The American lifestyle is accompanied by ever-increasing debts. The national debt is growing almost exponentially and passed the $20 trillion mark this year. That adds up to about $60,000 for every American. According to various skeptics, this immense government debt is a major threat to the dollar, especially if you include the tens of billions of unfunded liabilities, the future outlays for, for example, healthcare and pensions for which the government has put no money aside.

Yet, I do not think these debts are the biggest problem, for the simple reason that the Federal Reserve can give the government a helping hand in the most extreme case. The probability that the US government will not pay off its debts is practically zero, because debts are denominated in dollars that the central bank can print without any restrictions. And I think that is also the reason that the dollar has not yet collapsed.

The Dollar as a Financial Weapon

The biggest threat to this dollar system is, in my opinion, not of an economic nature (the astonishing US government debt), but rather of a political nature. In recent years, the US government (both under President Obama as well as under President Trump) has increasingly used (or abused?) its financial power to pressure other countries.

In recent years, the United States has tried, through economic sanctions, to put pressure on various countries, such as Iran, Russia, Venezuela and North Korea. These countries were closed off from the dollar system or were faced with sanctions that excluded certain individuals and businesses from the international payment system.

With this kind of sanctions, the US government uses its dollar as a type of financial weapon. Sanctions due to the nuclear weapons program in Iran caused an extreme depreciation of the Iranian currency, while the value of the Russian ruble was also severely undermined by the sanctions. And Venezuela, which already has a severe shortage of hard currency, is even further restricted in its ability to obtain dollars after the most recent round of sanctions imposed by the US.

Trade in Other Currencies

It is this kind of political action that encourages countries to expand their gold reserves or switch to trade in other currencies. Since the sanctions against Iran were lifted, the country is trading its oil exports in euros, not in dollars.

China and Russia have added a lot of gold to their reserves in recent years and now also use their own currency in bilateral trade. Venezuela no longer seeks financial assistance from the United States or the IMF, but is rather seeking help from trade partners such as China and Russia.

There are many other examples of countries that want to reduce their dependence on the dollar. Not because of the risk that the US can no longer pay its debt, but because of the increasing political risk associated with holding dollar reserves and other types of securities that are sensitive to potential sanctions.