Whenever there is an (artificial) economic expansion, driven by cheap credit and too low interest rates, it is sooner or later bound to go wrong. What we do not know in advance, however, is how things exactly go wrong. We only know that – at an artificial interest rate – malinvestments are made in certain sectors of the economy. In the 90s, we saw malinvestments in internet (startup) companies, domain names and the NASDAQ. In the run-up to the 2008 crisis the malinvestments were mainly concentrated in the housing market, house flipping and mortgage lenders. And this time? Where do the bubbles form?

We talked earlier about how – due to artificially low interest rates – stocks are yet again overvalued, especially when we look at technology companies. But also the recent cryptocurrency fad cannot be overlooked. Bitcoin, for instance, rose over the course of a few months to a record high of almost $20,000 dollar. Many crypto speculators seem to get rich quick by doing nothing; even gold investors began doubting themselves why in heaven’s earth they were invested in precious metals, missing out on the crypto craze (in finance, we call this FOMO, “Fear Of Missing Out”). Whereas at the time (in the 90s) many domain name speculators became very fast very rich, this time around we see cryptocurrency speculators doing the same. Just like domain names at the time, it is cryptocurrencies now which are – unfortunately – the victim of speculative excesses.

Do You Still Doubt Cryptocurrencies Are in A Bubble?

Take a share of Dell, Inc. Dell is a company in which I even invested just before Michael Dell´s did a leveraged buyout (with help of Silver Lake Capital) and took control of the company (Forbes even called it the “Nastiest Tech Buyout Ever”). Dell is a technology company of which its share price stood at less than a dollar but rallied in a very short timeframe to a record high of almost $55 dollar per share. During the dotcom bubble, Dell was one of the many internet companies that reached a billion-dollar-plus market cap. 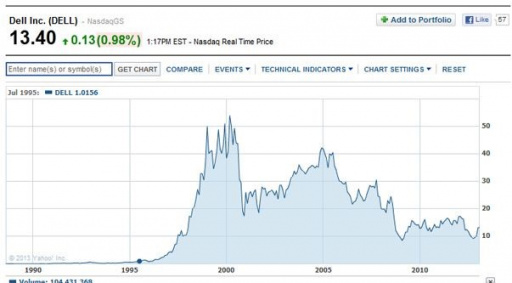 The share price of Dell went through the roof during the dotcom bubble of the late 90s, just to collapse months later. Even though Dell as a company did have fundamental value, its price was way too high and out of line with its value. Source: Yahoo Finance

Why do I cite Dell?

The answer is simple. Dell was (and continues to be) a valuable company with products, clients, distribution channels and income. But the price that was paid for Dell in 2000, was simply excessive.

We have to be very careful never to confuse price and value. And whenever we pay too much for something, even though it is valuable, it is not a wise investment.

Unfortunately, many crypto investors seem to have forgotten this ancient-old lesson.

I, at least, hope to have some creditability. I have been aware of cryptocurrencies for many years. Since 2013, I own a fraction of Bitcoin and since 2014, I have considerable quantities of Ripple´s XRP. I visited crypto conferences when only nerds, geeks and libertarians would visit them, and men dressed in suits were still absent. I will almost certainly not be the next Bitcoin-millionaire, but I am as no other familiar with the opportunities and limitations of this new technology. I even had the chance this year to spend considerable time with Nick Szabo, a crypto veteran who already in 1998 came up with a precursor to Bitcoin.

Even though I am a big fan of this technological revolution, I am warning for a bubble. A bubble which is even hurting, not helping Bitcoin. Bitcoin is not benefited by being turned into a fad. And, according to my judgment, even the biggest Bitcoin proponent can no longer deny that there exists a bubble in cryptocurrencies.

The problem is rather that the price of a Bitcoin is too unstable to ever be money or a unit of account. I came across the following joke which certainly has some truth to it: 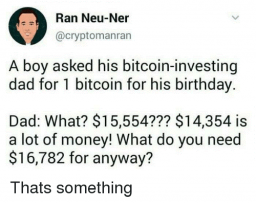 We are referring here, to a large extent, to intraday volatility. The Bitcoin price can rise or fall ten to twenty percent in a matter of an hour, something which would be rather unusual in the precious metals market, for instance in the case of gold prices.

The current speculation – and impulsive purchases of a larger, mainly ignorant public – is making Bitcoin prices even less stable. Volatility is worsening, not improving.

Some Bitcoin proponents still pretend that Bitcoin is not in a bubble. I was sent, for instance, this recent cartoon: 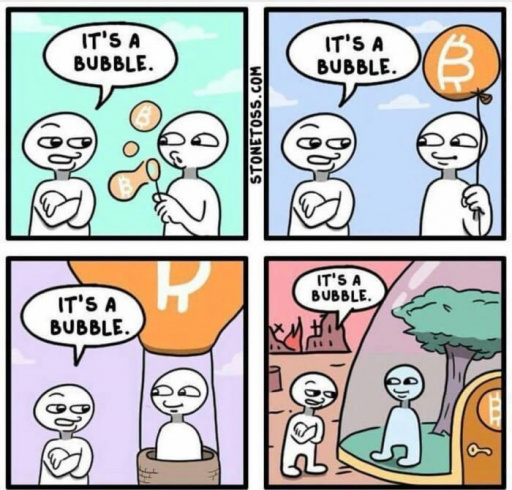 A Bitcoin has, according to them, without a doubt value in a world full of fiat money and third-party security holes. While we have to admit that the current financial system is very fragile and suffers from enough troubles. But that does not imply that Bitcoin is currently as valuable as its current price suggests.

One of the major troubles of Bitcoin is the fact that it is too volatile to truly function as money or an effective medium of exchange. Now, in some contexts, this does not matter (take Venezuela for instance, where capital controls are a reality and its currency, the Venezuelan bolivar, is itself as unstable as Bitcoin). However, in the context of developed countries such as the United States or many European nations, it actually does matter. Moreover, Bitcoin seems to become a victim of its own success, given the long processing times and the high transaction costs (recently, a single Bitcoin transaction already cost about thirty dollars).

And who is currently buying Bitcoin to use it as money, as a medium of exchange?

The answer is: almost nobody. There are merely investors who buy it in the hope to sell it later against a higher price (and later is increasingly meaning sooner). The only “real” transaction that takes place are from investors who already made a neat profit and want to cash out, or at least cash out partially, by exchanging Bitcoins directly for gold, goods or real estate. The exceptions are a limited group of Chinese (and Venezuelans/Nigerians) who want to circumvent their countries´ capital controls and are looking for ways to get money out of their country. But that is certainly not enough to justify the current price way above the $10,000 mark.

Then there exists another argument that the demand will first be speculative, driven exclusively by investors who hope to profit by buying Bitcoin before it will become useful as a medium of exchange. This speculative demand would, over time, “stabilize its price” and the volatility. The evidence, however, seems to point at another direction for the moment.

Even If the Current Bitcoin Price Would Be Justified by Its Fundamental Value, Then We Still Have a Crypto Bubble

But even then: if we, for convenience sake, accept the above arguments and assume that Bitcoin already has enormous fundamental value (that is, it is widely being used as a medium of exchange and unit of account), then even the largest Bitcoin proponents must admit that there is a crypto bubble.

Why? My reasoning is simple.

Bitcoin is not the only cryptocurrency. And that even though in the payment industry there is a strong “winner takes all” effect. A currency is valuable because many people want it and actually use it. A dominant currency has, as a result, a large share of market. Take the dollar and the euro for instance, the world´s two most important currencies in the world, and also the most liquid currency markets in the world. But even in cryptoland the same principle applies. We can never use five hundred different currencies; no fiat currencies nor crypto currencies.

How can somebody possibly explain then that more than hundred crypto currencies are currently valued at over a hundred million dollars?

And how can somebody possibly explain that more than five hundred cryptocurrencies are currently valued at over a million dollars?

If Bitcoin would be as valuable as some defenders pretend it is, and there is no crypto bubble, then the Bitcoin price would be followed, at most, by some complementary coins (Ether, Ripple?), but certainly not by hundreds of other competing crypto currencies. Let alone that these, mostly worthless, cryptocurrencies deserve million dollar plus valuations.

In other words, if somebody wants to dismiss a crypto bubble by arguing that the current Bitcoin price is justified by its fundamental value and an increase in use and adoption of Bitcoin, then it is close to impossible to justify the very same for the remaining 500+ cryptocurrencies?

This Is One for the History Books

This chapter in monetary history will perhaps go into the history books as the crypto bubble. In the next crisis, some investors will yet again lose money. Make sure you are not swayed by the fad of the day. Make sure you do not drive yourself crazy by family and friends who seem to double their money every other week. Patience pays off, as ever, on financial markets. It is about the long run, not the short run. And gambling is certainly not investing.