In 2007, value investor David Einhorn wrote a fascinating book titled “Fooling Some of the People All of the Time: A Long, Short Story”, which is about how companies over the course of the business cycle begin using accounting tricks and the indifference of stock investors as long as stock prices are rising. This “accounting cycle” is intimately connected to the business cycle. In boom times, businesses can easily get away with creative (though, in many cases, perfectly legal) accounting methods, only to be corrected by markets when a recession sets in. I argue that the current cycle is nothing different. And I will share a few cases which prove my point.

Any content spending, in the case of Netflix, is recorded on the asset side of its balance sheet (initially as a non-current content asset). Then, content assets are gradually amortized over time. According to a recently released document by Netflix, which explains how content spending is accounted for, Netflix writes off 90% of the value of a content asset within four years. Netflix does not disclose exactly at what rate, on average, so we have to second-guess how Netflix is really amortizing individual series, seasons or movies.

No disclosures are made on what happens when a movie or series is a complete disaster; is the asset written off completely? Most likely it isn’t. Let’s take Marco Polo, which was the most expensive Netflix original at the time. According to some estimates, the production of Marco Polo cost close to $200 million dollars. The first seasons flopped and Netflix decided to cancel Marco Polo all together. Writing down the entire $200 million dollar, shareholders would take a $0.46 hit on earnings.

However, if Netflix gradually writes down over four years, it would spread the loss over four years or longer. Investors are currently expecting $0.32 of earnings per share over the current quarter. Put differently, writing off Marco Polo would lead to negative instead of positive earnings.

But that is not the key takeaway: Netflix’s content spending resembles more operational than capital expenditures. And as it records content assets with a lifespan of multiple years while subscribers are binge watching their favorite content in days and not years, Netflix is inflating its bottom line. This is the reason why Netflix is showing a profit while it is burning through cash. But as Netflix embarked upon its very own binge, binge content spending, it is not taking into account that subscriber growth and churn will rapidly worsen as soon as it cuts its content spending. In other words, Netflix is unprofitable and its cash flow statement is a clear proof.

So how does Netflix get away with this?

The answer is sad: during a boom, investors tend to look away from anything that could end a rally. As long as returns are positive and high, nobody worries about where earnings are coming from ( that is, earnings quality). The narrative is clear: Netflix is growing, and all that matters are the number of new subscriptions signing up and steadily growing earnings.

And it’s all about gross margins, right? Wrong.

Supposedly, Tesla maintains far higher gross margins on its cars than any other car manufacturer (28% compared to General Motors' 18% and Ford's 10%). But there are few (accounting) reasons why Elon Musk’s narrative is completely false and achieved with diverging accounting standards:

Generally Accepted Accounting Principles (or GAAP) is the accounting standard adopted by the SEC. Publicly-listed companies in the US are obliged to follow GAAP standards when filing their financial statements.

However, companies sometimes deviate from these standards in their reporting. While there might be legitimate reason to deviate from GAAP, US corporations are obliged to disclose whether they are referring to GAAP or non-GAAP numbers. And whenever they report a non-GAAP measure (for instance, earnings) then they are in many cases also obliged to report the corresponding GAAP figure. Curiously enough, companies are allowed to issue press releases while only referring to non-GAAP figures. These press releases are used by the press to write their headlines.

Deviating from GAAP is, however, often a way to artificially inflate the bottom line by accounting away some inconvenient truths to a business. Take a look at how GAAP earnings per share differ from non-GAAP earnings among major US companies: 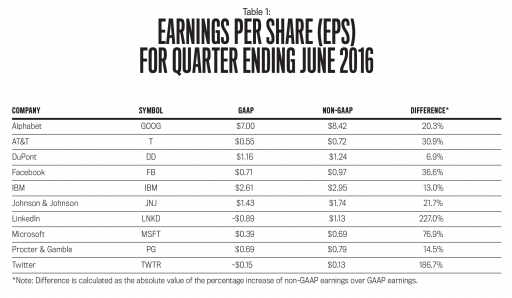 Notice that in all cases, non-GAAP earnings are higher than GAAP earnings, in some cases even turning losses into profits.

A coincidence? Not so much.

Over the course of a business cycle investors become complacent. Companies follow non-GAAP earnings to impress investors, and make possible a gradual, upward growth trend in earnings. In other words, deviating from GAAP allows companies to show better figures than they really are, something Thomas A. King explained in greater detail here.

This is clearly proven by the fact that there is absolutely no consistency as to what the deviation consists of: stock-based compensation, intangibles, takeovers, insurance, pensions, derivatives, etc. Boards seem remarkably skilled in cherry-picking accounting methods to artificially inflate the bottom line.

This tendency of inflating profits becomes greater and greater during an economic boom, only to be corrected during a recession. And right now, more and more companies are diverging from GAAP to report non-GAAP earnings and other performance indicators. Courtesy of Zero Hedge, you can observe in the following chart how in the past few years the use of non-GAAP accounting has proliferated: 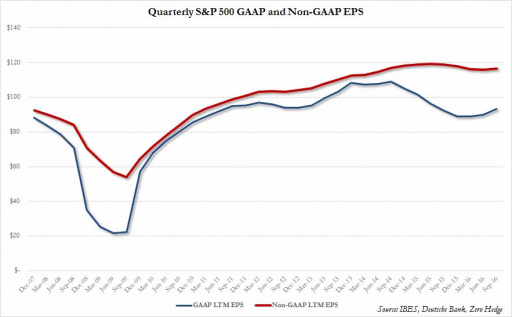 What does this imply for investors right now?

The accounting cycle goes hand in hand with the business cycle. And this time around things will not be any different.