You have probably heard it before: “Put 25% in stocks, 50% in bonds and 25% in real estate,” or something similar. These asset allocations are almost sacred to some investors. Almost everyone has their own favorite asset allocation. But, even the banks say that a fixed asset allocation is absurd. What should you do then? Should you invest in stocks or gold?

This is the reason why some say that fixed asset allocations are absurd.

Whoever agrees that there are sensible, and less sensible, moments to invest in a particular asset class should also conclude that a fixed (and unchangeable) asset allocation is bad for your returns.

But you’re Forgetting Something! You Can Rebalance Your Portfolio!

However, the advocates of fixed asset allocations will then say that “you will need to 'rebalance' your portfolio every year.” After all, your allocation may become unbalanced due to prices going up and down. They then argue that by rebalancing, your 'overvalued' assets will be sold and exchanged for 'undervalued' assets.

Apart from the transaction costs which you will incur (the more you 'rebalance,' the worse off you’ll be), there is an even stronger argument for why you shouldn’t invest in this manner.

By looking at the bigger picture, we can roughly divide assets in three classes: stocks, commodities and bonds.

All these asset classes, or markets, have secular price trends. These price movements can take, on average, 15 to 20 year to complete. So on average, everyone will experience only about four of these secular bull or bear markets in their lifetime. So in a way, you will only have to change opinion regarding the direction of the long-term investment trends about four times and subsequently stick with it, instead of spreading your investments and continuously 'rebalancing.'

The highs and lows of these securities markets are characterized by their enormous social and societal effects, right down into the city streets. In the 1970s, nobody wanted to work in the financial industry. The word 'stock' was considered 'dirty,' while physical products and oil (and the extraction of it) were popular instead. Everyone was trading in commodities, and retail investors even tried their hands at forward contracts. Today, everything has changed. There are now more stock brokers than there are farmers, as it were.

What Does This Have to Do with the Rebalancing of an Asset Allocation?

But this presents us with a fundamental problem. After all, if one accepts the existence of secular bull markets, which could easily have a duration of 15 years or longer, then rebalancing your portfolio regularly is not very sensible, to say the least.

For example, if the stocks rise sharply in a particular year, which implies we would have to sell shares at the year’s end to buy commodities and bonds, we could very well be making a huge mistake.

This is because the stock market may be rising for fifteen consecutive years (of course, not without interim declines). Rebalancing would then lead to large missed returns. Simultaneously you would be investing more in, for example, commodities, which may also remain stuck in a bear market for fifteen years or longer.

AN OVERVIEW OF SECULAR BULL AND BEAR MARKETS IN STOCKS. WE DISPLAY THE RELEVANT YEARS, AND THE TOTAL PERCENTAGE CHANGE BETWEEN SELECTED HISTORICAL HIGHS AND LOWS (CLICK TO ZOOM IN).

In other words, you are basically selling your 'winners,' while buying 'losers,' meaning you would be far better off if you hadn’t made any changes at all.

The only conclusion that we can draw is that a fixed asset allocation, even with structural rebalancing (every year, for example), is a bad idea for smart investors.

The Current Stock Market Boom Looks like the 1934 Boom

Its name may suggest otherwise, but the Great Depression brought more than just misery on the stock market.

The period we’re currently going through on the stock market has a strong similarity with the boom in 1934-37. The US stock market, the Dow Jones Industrial Standard, doubled in value during that period. That was after the Great Depression started, and when the stock market had already gone through a strong decline.

And again, during the '08 recession, Western stock markets saw half of their value evaporate. And now we’re in a boom that started to take off in 2013. Like in 1937, the stock markets have doubled in value, compared to the low they hit just after the credit crunch broke out.

I expect to see a re-run of the Great Depression. Given the current monetary policies and stock market valuations, I am convinced that disappointing and negative returns on the stock markets are nearly inevitable in the coming five to ten years.

1 Troy Ounce for the Dow?

Historical returns — driven by long-term bull and bear markets — show that both commodities, and stocks, can be an interesting investment at different points in time.

During our lifetimes we will only experience four of these type of secular bull or bear markets, with periods of long-term increases or declines easily taking up to 15 years to complete.

And that’s exactly how we need to look at the current boom in Western stocks.

I believe that the boom will lead to prices that are — in real terms, corrected for inflation — lower than the bottom that was reached already back in 2009. Just like in the 1930s.

To put things into perspective, it is interesting to look at the ratio between the Dow Jones index and the gold price. By looking at this ratio, we get an idea of 'where we are' in the secular bull market.

When in 1937, during the Great Depression, the stock market reached an 'intermediate high,' the Dow Jones could be bought for 5 troy ounces of gold.

The Dow to Gold Ratio & Long-Term Bull and Bear Markets

Let’s look at this ratio on the basis of the aforementioned secular bull and bear markets. 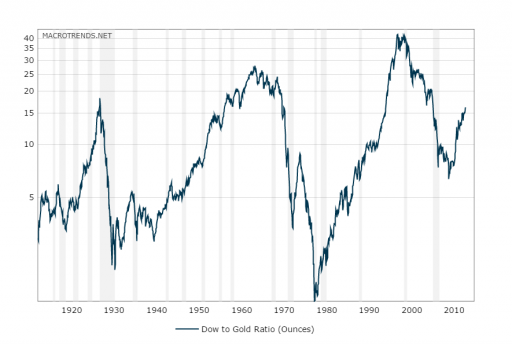 Given the current overvaluation of stocks and the highly negative sentiment in the gold market, a return to 2 troy ounces would certainly not be impossible.

Such a return could, for instance, mean that the Dow Jones falls with 50%, and that the gold price quadruples (to $4,380/oz). It could also means that the gold price increases eightfold, while the stock prices remain constant because as our money is devalued further.

Whatever the case, it should be as clear as day that gold is currently highly undervalued relative to US stocks, which are, in turn, largely correlated with European stock markets. It would be wise to exchange your stocks for physical gold this summer. By buying gold you buy a safeguard in the midst of an enormous bull market in commodities and a secular bear market in stocks.

Should you invest in stocks or gold? Gold, for the next coming years.