The recent collapse in stock prices appears to persist. After an apparent recovery of stock prices last Thursday and yesterday, new data (quarterly earnings) was announced. Among others, internet companies such as Alphabet (Google) and Amazon reported their quarterly numbers. Alphabet fell after announcing its quarterly data by almost 5 percent in after-hours, whereas Amazon fell 8 percent due to disappointing sales growth. In addition, the other members of the so-called FANG group (Facebook and Netflix) also dropped.

When Will Investors Recognize the Internet Bubble for What It Is?

Despite the fact that the internet bubble – also labelled the dotcom bubble 2.0 – is nearly undeniable, there appears to be anything but attention to the exaggerated stock market valuations of various internet-related shares. Better yet, the incredibly high returns on stock markets, especially of these internet stocks, appear to barely make investors question recent prices. Stock price targets are simply raised time after time and everybody continues with its daily business as if stocks were not priced to perfection.

Take the following chart. In this chart, the increases in asset prices of various (historical) bubbles are compared to each other. The first in line might be of special interest to you: this was, after all, the bubble in gold (and, more generally, precious metals and commodities) of the late 1970s. Gold prices rose within a few years by a staggering 500 percent. The Nikkei index, in the late 1980s, was the next big bubble: everything that could possibly be bought in Japan looked extremely expensive. At a certain point, the land under the Imperial Palace in Tokyo, was “worth” more than all the land in California: land prices would eventually fall substantially after the Nikkei bubble collapsed.

Then the Asia contagion crisis followed, with an important role for countries such as Thailand and Korea. In the chart below, you can observe the performance of the Thai stock market. Then the two “big ones” among North-American bubbles followed in close succession: first the technology bubble (dotcom 1.0), followed by the real estate (subprime) bubble. 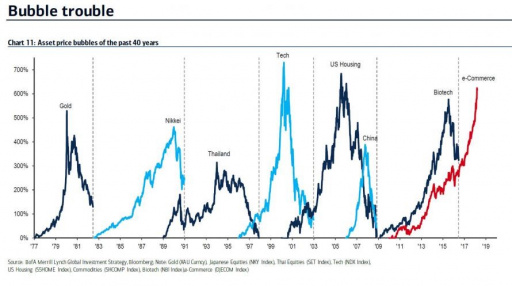 All this means that stocks had a rough time last week, and could be in for another rough period this week. Better put, both the S&P 500 index and the Dow Jones index already fell to such an extent that year to date both are in the red. With the recent drop in stocks, both stock indexes have dropped instead of risen since the beginning of the year. The S&P 500 index had its worst month since September 2011.

Yet also other – earlier discussed – trends appear to be strengthening again: for example, the EURUSD broke through the 1.14 handle to a level of 1.1370, while the yield curve again flattened further. Especially the developments in the 10-year US Treasury rate were noticeable. The 10-year rate rose recently within no-time no a level beyond 3.20%. After fluctuating for years close to or slightly below 3%, the 10-year government rate broke convincingly through the 3% barrier. But that very same 10-year rate fell last week even faster back to 3.10%, and appears to be heading even lower. Not just the euro lost ground against the US dollar, the Chinese yuan is also having a tough time due to the strengthening of the dollar. Markets are closing in quickly on the “magical” 7-yuan-barrier, since the USDCNY rate currently stands at 6.96.

Gold prices appear to have remained immune from the recent market volatility and barely moved, standing at a level of close to $1230 per troy ounce. Perhaps gold prices remain undecided, unsure whether the current pullback is part of a broader correction or just a temporary setback for stock market bulls.