Perhaps you’ve heard of John Hathaway; he is a senior portfolio manager of the Tocqueville Gold Fund. Earlier this week he wrote in Barron’s that "an acute shortage of gold can boost prices." But, as mentioned in our previous articles, his analysis is wrong. As the supply and demand dynamics of gold are unlike those of other commodities such as rice or wheat, there cannot be an acute shortage. After all, gold isn’t consumed, so there is never an actual physical shortage. But that’s not the error I want to discuss today.

The Same Thing All over Again

The biggest problem with John Hathaway’s suggestion (in An ‘Acute Shortage’ in Gold Can Boost Prices) is that it relies on the same age-old myth: the nonsensical idea that the gold price is manipulated downward by 'evil forces.' Some gold investors argue that the gold price remains at an artificial low, because 'paper gold is constantly being dumped on the market' (referring to the futures market).

John Hathaway and these investors apparently do not realize that we are in the middle of a multiannual correction of commodity prices. Furthermore, up till now, gold has performed well compared to many other commodities.

In fact, gold has reached historical highs relative to many commodity composite indices, as it did relative to several individual commodities. Last week I already spoke about the gold/oil ratio, which is at a historical high. But the same goes for the gold/silver, gold/platinum, gold/coffee, gold/sugar, gold/corn, gold/cotton, gold/copper, gold/nickel, gold/tin and the gold/aluminum ratios, which are at exceptionally high levels.

Gold Has Even Outperformed Platinum and Silver

So we should actually look for an explanation as to why gold is now relatively more expensive than it has ever been (relative to other commodities), instead of imagining a big conspiracy aimed at lowering the gold price.

As a result, it may very well be that gold doesn’t provide the best investment opportunity at this moment; it may be platinum or silver instead. Equally, the gold price may very well decline in the near future (in dollar terms). However, for European investors this may be compensated by a declining euro towards parity (1=1).

Besides, later in his article John Hathaway does show that he understands the key factors. I cite: "The negative investment thesis [for gold] seems to rest upon confidence that central bankers, and the Fed in particular, will steer a course away from radical monetary experimentation that will return to a normal structure of interest rates and robust economic growth."

That means that it is now time to take a contrarian stand, and invest in commodities. The unlimited confidence placed in central banks, I believe, is misplaced. And as soon as it starts to crumble, gold will revitalize, and double-digit (average) annual returns on gold may not be unreasonable.

Because, as a manager from Bridgewater Associates says, the prospects for bonds and stocks yields for the coming years have never been so poor. And, dear readers, that’s exactly why I feel it is important to end this quarter being long in precious metals, and to hold this position for at least three to five years. 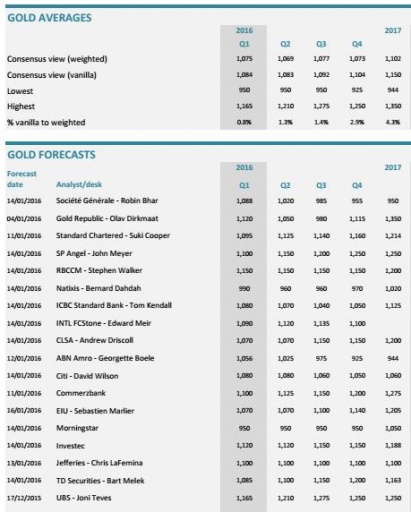