Before we embark upon our forecasts for 2017 (especially regarding precious metals prices), it is without a doubt worth it to analyze the year 2016 once more with the help of a few charts. These charts represent the protagonists of past year, the returns on the most important financial assets and the most important changes in some select financial data. In some cases, these will remain as important as they were last year in the coming twelve months. We will glance through the Dow Jones, German government bonds, the dollar (against the euro), the number of worldwide corporate defaults, the yield curve spread, China´s dollar reserves, the dollar-LIBOR, the oil price, bitcoin and of course the gold price.

The Dow Jones index went up after an initial setback at the beginning of this year with a decline of about 2,500 points. The Dow Jones index has not yet topped the 20,000 points mark, which seems only a matter of time. The index has been overvalued the entire year or, in other words, the underlying profitability of stocks do not justify the share prices that were paid in 2016. This overvaluation appears to continue into 2017, as long as markets live under the illusion that the United States is in the midst of a mind-blowing economic recovery and that interest rate hikes – far from putting the economy at risk – will not slow down economic growth. (In the next chart, we will be able to see that this is a so-called pie in the sky after the first two rate hikes since the 2008 crisis by the Federal Reserve.) Even the fact that corporate profits declined over 2016 did not lead to lower stock prices. In short, lower profits, higher stock prices: we are in the midst of the largest stock market bubble since the dotcom bubble (and, yes, we will have our WorldOnline´s and WorldCom´s this time around, too.)

The LIBOR interest rate benchmark is the most important interest rate benchmark in the world. If we take a look at the speed at which dollar-LIBOR rates have increased over the year, we must conclude that stock investors should be extremely worried. This chart is one to save for later and to go back to in 2017. As I remarked above, the Fed has hiked interest rates two times for the first time since the Great Recession: once in December 2015 and once in December 2016. These two modest rate hikes have had their effects on interbank interest rates (the Fed determines the interest rate that banks receive on their deposits at the Fed, the LIBOR reflects the interest rate that banks charge each other for short-term credit.) The 12-month US dollar LIBOR rose disproportionately when compared to the Fed funds rate and went from less than 1.2% to 1.7% at the end of the year. This seems like an insignificant change, but in fact implies an increase of more than 40% in financing costs. With interest rates as low as today, even small increases in interest rates lead to huge increases in financing costs. It is likely that the USD LIBOR continues to rise over the year.

The result of these increasing financing costs is apparent in our next chart. Here you can observe the number of corporate defaults grouped by region (Europe, emerging markets, US excluding commodity businesses, and US commodity businesses). We can conclude a couple of things: (a) in emerging markets corporate defaults are quickly rising. This increase can be traced back to a stronger dollar and weakening emerging economies. The Chinese economy is deteriorating, which has a large impact on countries that depend on Chinese growth. The stronger dollar makes it increasingly difficult to refinance debt and is weighing on dollar liabilities in terms of local currency. (b) The number of corporate defaults among US-based commodity producers is suffering from a worrisome increase. This is evidenced especially in the US gas and oil industry. I wrote earlier this year how shale oil could trigger the next recession. With current oil prices, many US oil producers are losing money. The result? Widespread bankruptcies. (c) Even without the gas and oil industry, corporate defaults are on the rise. This has, of course, everything to do with the increase in funding costs. The idea that interest rate hikes will not slow down economic growth is therefore absurd. Too many companies are addicted to cheap corporate financing. The most important takeaway of this chart is that the figures in 2016 demonstrate that we are near recession levels when it comes to corporate defaults. 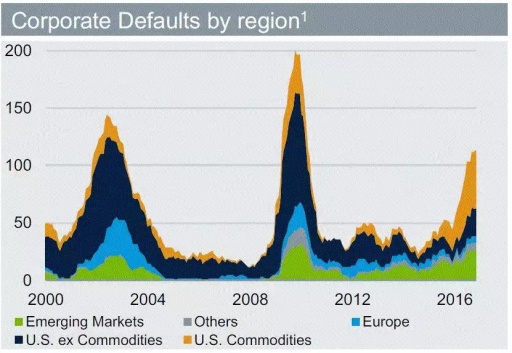 Another consequence of the increase in interest rates in the US is, as remarked earlier, a stronger dollar. Because of the interest rate differential between the Eurozone and the United States, more capital is flowing into the US. As a result, the dollar reached at the end of the year again a point that is close to parity: 1.04 dollar against the euro. It is only a matter of time before parity will be reached. I suspect that the dollar continues to appreciate, until the US suffers a stock market crash and/or recession. If the dollar continues to appreciate, central banks and companies in emerging markets will come increasingly under pressure. A scenario akin to the Asia contagion crisis of the late 90´s is one of the possible scenarios.

The yield curve spread is nothing else than the 10-year (US) government yield against the 3-month government yield. Whenever this spread is negative, it almost always means a recession is near. The fact that his spread was narrowing in the first semester of 2016 was a bit unsettling. However, later in November, the spread began to increase. This means that, at first sight, the US economy is out of the danger zone. The interest rate hikes by the Fed have had their effect upon government yields and as a consequence on the yield curve spread as well. 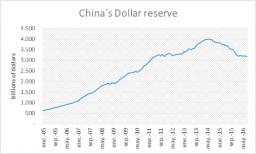 For many of our readers the most important chart of all: the gold price, which came from something that looked like a bottom, rallied at the beginning of last year, and then dropped again to somewhat above the level at which we started the year. According to my judgment, it is perfectly imaginable that gold prices drop below the level at which we initially began 2016: below $1,100 per troy ounce. The main reason? A climate of interest rate increases in the US.

It was a fascinating year, also in Europe. The European Central Bank made its extreme monetary policy even more extreme, and this became clearly visible in how German (10 year) government bond yields moved over the year. After Mario Draghi embarked upon a European QE purchase program, German bond yields went negative. Yields remained negative on the 10-year “Bund until Mario Draghi decided to extend the purchase program, but lower the monthly amount of purchases. Apparently, the market is convinced that Draghi is engaging in “tapering” (or, to use another analogy, tightening the belt). Otherwise, German bond yields would not have moved upwards as much as they did in the last few weeks of 2016. This trend might continue into the beginning of 2017, until Mario Draghi decides that enough is enough, and turns extreme monetary policy in even more extreme policy. He approaches, after all, the end of his term. Taking into account this fact, there is no personal obstacle to withhold Draghi from making monetary policy somewhat more extreme again. In the meanwhile, the euro might recover some ground against the dollar, until Mario Draghi decides that interest rates in the Eurozone, of which the German rates are the most important, are not allowed to rise further.

I have said surprisingly little about bitcoins over the past year. This chart concerns the development of the bitcoin price in 2016, excluding the sharp correction of the past few days (the bitcoin price neared par with the gold price, until bitcoin prices came down 20% within no-time). There is some truth to the idea that bitcoins are a form of digital gold, but this digital gold does not offer the same certainties as that good-old physical gold. An investment in Bitcoins is, in some sense, an all or nothing investment: the question is whether Bitcoin will still exist in five years from now in its current form. If the answer to that question is a resounding “yes,” then it is very well possible that an investment in this cryptocurrency will have turned out to be extremely profitable. The bitcoin price has mostly profited from increasing capital controls in China (the Chinese government even limited the possibility for its citizens to exchange yuan for physical gold and withdrew without prior notice sales permits of various gold sellers). Bitcoins are a way to get around those capital controls. The bitcoin market remains spectacularly volatile, and will most probably remain volatile for the remainder of the year. 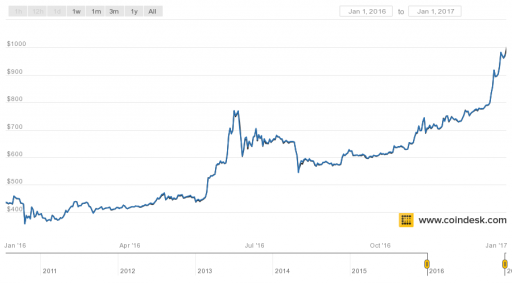