Market correction? Check. Gold price up? Check. Are banks in trouble? Check. Has confidence in central banks declined? Check. All of this is no surprise for our regular readers. After all, they were prepared. A year ago I started warning for an 'unmistakable (financial) hurricane.' Our readers knew stock markets were highly overvalued (and still are). They knew that precious metals were undervalued (and still are). They also knew that banking shares were to be avoided, and that the central banks aren’t omnipotent. What now?

And yes, even the Dutch national pride:

And I could keep on going and going. In other words, banks across the board took a dive.

The reason why is quite simple: the trust placed in central banks is crumbling. While we’ve now seen four QEs (with billions and billions spent on monetary stimulus), the economy seems to relapse once again, while it never even really got back up and running.

Besides, the extreme (mis)management of practically all central banks in the world has led to extreme economic imbalances. Central banks who pegged their currency to the dollar are currently losing reserves by the billions, given the strong dollar and the current policymaking of the Federal Reserve. Central banks are apparently less powerful than people had thought.

The only thing they have achieved is buying time. For example: with low interest rates they have been able to suppress defaults temporarily, as shown in the graph below. But this is going to come back and backfire. 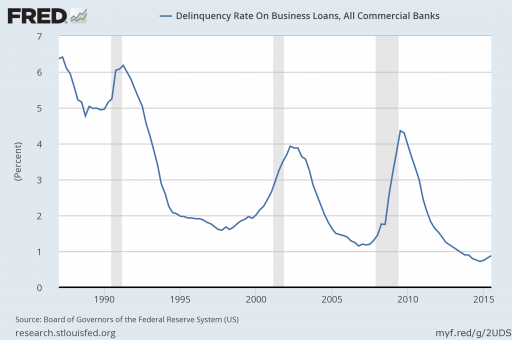 THE PERCENTAGE OF DEFAULTS ON BANK CREDIT HAS BEEN HELD AT TEMPORARLY LOWs FOR A LONG TIME, GIVEN THAT CENTRAL BANKS ARE KEEPING INTEREST RATEs LOW. tHESE EXTREME MEASURES WILL BACKFIRE. WHEN RATES RETURN TO  'NORMAL LEVELS', THIS WEEK, THE MARKET RECEIVED A PREVIEW.

Never was the percentage of defaults on bank credit this low. And not only in the united states; they are at all-time lows in Europe and China as well. When it starts crawling back up, and with a faltering economy this is a matter of time, the banks’ balances will be put under pressure. Ergo, falling stock prices, with banking shares leading the charge downwards.

The emperor has no clothes. Central banks may be able to distort asset prices, interfere with demand and supply, but they cannot change the amount of given physical factors of production. We, as a society, cannot change the cards we are dealt, but we can use them in a better, or worse, way. While the markets provide an incentive to use them as well as we can, central banks can send signals which deceive markets, and lead to disaster. In a way, scarce resources are being misused.

Central bankers are, again, facing an inevitable problem. Asset prices, as well as demand and supply in the real economy, can only be disrupted temporarily.

Some bureaucrats are stubborn. For example, in Italy, the short selling of banking stocks was (temporarily) prohibited. That it doesn’t solve anything (actually, it might be counterproductive), ought to be clear for most of us by now.

China’s crash at the start of this year gave rise to last week’s market volatility. And that crash was a result of, among others (let’s put it mildly), the proactive intervention of the Chinese watchdog. Short selling was prohibited, and directors were forbidden to sell stocks, while traders were prosecuted and punished.

However, this did not stop traders to sell against continuously lower prices. In the first week of 2016, the Chinese stock market was a massacre. And the Chinese economy is no longer considered the left-over child: that cute, growing favorite of the world’s superpowers. The Chinese economy is the second-largest economy in the world, and the demand for commodities is dominated by the Chinese.

The Chinese are doing what the Italians have tried before. They are trying to kill volatility (read: sharp price declines) by persecuting the oh-so-devilish short sellers. It should be clear that this doesn’t constitute a solution. Yet, you can be sure that these interventions will become fashionable again (also in other countries).

Ironically, the Algemeen Dagblad, a well-read Dutch newspaper, wrote exactly a year ago that "nobody is expecting a drama like we have seen in 2008". A perfectly contrarian indicator of the market’ sentiment. Earlier, I mentioned: "It doesn’t say anything about when stock prices will return to a 'normal' level again.

What it does tell us is that investing in stocks is extremely foolish right now. Personally, I believe that a return to normality is more likely to happen sooner than later, perhaps even this year.

What do we do now?

It depends very much on what the markets are going to do next week. I won’t exclude the possibility that the revival of the gold price turns out to be a temporary upswing, similar to the euro’s upswing. I still expect a growing dollar bubble, with a gold price that remains under pressure.

Bearing this in mind, at the moment it may be wiser to choose silver and platinum over the purchase of gold. The gold price was never so high relative to, for example, the oil price.

Whatever the case, the prospect of a weak euro, and heavily overvalued stock markets, means that commodities are currently the right place to invest in. You are advised to slowly acquire a position, or to expand your current position.