This week I stumbled upon an interesting chart. In this chart, the Goldman Sachs Commodity Index (GSCI), an index tracking the prices of a basket of commodities, is contrasted with the S&P 500 index. This gives us the GSCI/S&P 500 ratio. Whenever the GSCI/S&P 500 ratio is high, we are paying relatively little for stocks in terms of commodities. Conversely, if the ratio is low, we are paying relatively much for stocks relative to commodities. What does the ratio imply right now? Is this the moment to invest in precious metals?

If we take a glance at the chart that portrays the GSCI/S&P 500 ratio, we can observe a few interesting things:

Silver prices stood in that same 1997/1998 period around $5 dollar per troy ounce. In 2008, silver prices reached a level of $20 per troy ounce, four times as much. This translates into a (gross) compound average growth rate of 14.9%. Not bad at all! 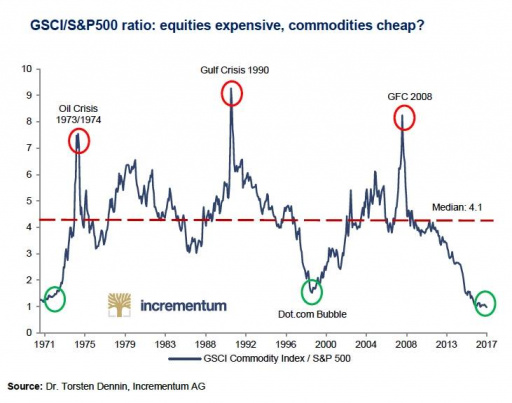 Nonetheless, we could also raise some “ifs and buts.” First, we should look at the composition of the Goldman Sachs Commodity Index (GSCI). Which commodities does the index track? Are we correct in equating commodities with precious metals?

This overrepresentation of crude oil can lead to wrong conclusions. At any rate, commodity prices are generally strongly correlated. For instance, I wrote back in 2015 that: “[B]lack gold, crude oil, has a much stronger and more intimate relationship with gold than most of us realize. If we go back to 1983, we can observe a strong and significant relationship between oil prices and gold prices.”

Despite the fact that oil and gold prices are generally strongly correlated with each other, is the range between both prices fluctuate pretty ample. Let us therefore for a moment look at the gold/oil ratio. The gold/oil ratio can be derived rather simply by dividing the gold price by the oil price. 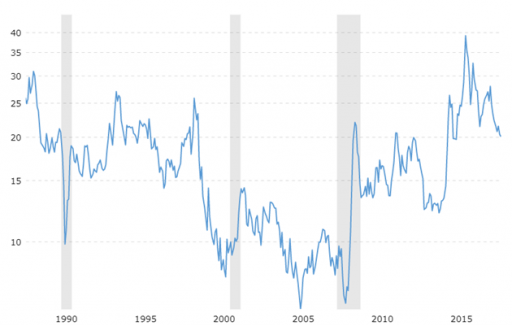 In this chart, we can observe that the gold/oil ratio, surprisingly, currently stands at 20. That is to say, the price of an ounce of gold is twenty times the price of a barrel of oil. This could imply that gold is “expensive” relative to gold. Before the 2008 crisis, for instance, the ratio stood at merely 10:1 or even less. All this together means that energy prices are apparently at a cyclical low against precious metals prices. Therefore, precious metals prices seem a bit less favorable than energy prices. This could translate into gold underperforming relative to commodities as a general category (and therefore the GSCI commodity index).

Let us therefore briefly take a look at the S&P 500/gold ratio. How many (troy) ounces of gold does an investor need to buy the S&P 500 stock market index (measured in points)? 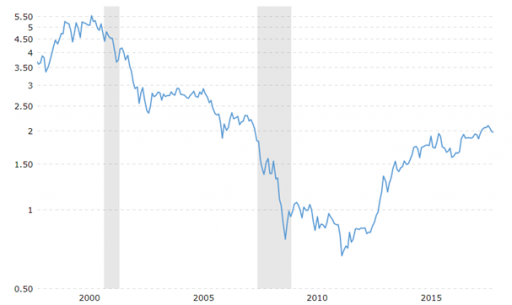 s&amp;p 500/Gold-Ratio. How much gold is needed to buy an index? Source:macrotrends.net

In this chart, we can observe a slightly different pattern: yes, stocks still appear expensive. But not as expensive as in 2000 (at the time of the dotcom bubble). Currently, the S&P 500 index costs (pointwise) two ounces of gold. From 2009 to 2011 the index cost a lot less than now: at that time, this stock market index amounted to three quarters of a troy ounce of gold. In other words, in 2009 the stock market investor was the fortunate one. 2011 was, of course, the year in which precious metals prices peaked.

Nevertheless, we are currently at roughly the same level as before the 2008 crisis (at two troy ounces of gold). In 2000, the gold price stood at a cyclical and long-term low and stock markets at extreme cyclical highs: as a result, the S&P 500 / gold ratio rose up to 5:1 (!). 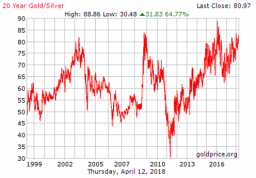 Here we can see that gold is sometimes relatively expensive against silver: for instance in 2008, when the crisis erupted, or in 2015 when the silver price had an even tougher time than the gold price, or as now, as the gold/silver ratio stands at 81:1 (close to a historical peak as you can observe in the above chart).

This implies that silver can play an important role in your portfolio, as long as you look to profit from the information provided by the (GSCI) commodity index/S&P 500 ratio. Silver seems better positioned (read: relatively cheaper) compared to gold for the medium- and long-term.

And What About Platinum?

In the context of all the above, an investor that wants to profit from the commodities = cheap trend should perhaps take a close look at the “ugly duckling” among precious metals: platinum. Undervalued, and even by us barely mentioned, but a metal that to a greater degree seems to have bottomed relative to the stock market. That means that platinum might turn out to be better correlated with the GSCI commodity index.

At any rate, it seems that we have arrived at a turning point in precious metals markets: the conclusions, however, have barely changed: stocks are (too) expensive, commodities are (too) cheap. Among commodities, gold seems to be a bit less favorably priced than silver and platinum. In an ideal scenario, you would – given the GSCI/S&P 500 ratio discussed earlier - sell your stocks and exchange them for gold, silver and platinum, after which you would not revise your portfolio for another decade. Because what will happen to precious metals prices when a crisis and a stock market crash occurs, might lead to “noise”: you might even panic and sell your silver and platinum, as they depend to a larger extent than gold on the macro-economic climate.

According to the first chart that we have seen (which contrasts a commodity index with a stock market index) you should have sold your precious metals already in 2008 before beginning to invest in stocks. You would have suffered lower returns for three years in a row (though avoided any losses), since precious metals prices peaked from 2008 to 2011. But that is a modest price to pay to avoid any large losses on the stock market (and commodity markets). And avoiding losses, rather than optimizing gains, is the key to long-term returns in excess of the market.