At the time of writing, Bitcoin prices reached an all-time high of more than $17,200 dollars, whereas over the past few months the gold price remained close to $1,200 per troy ounce. Moreover, when we have a look at recent data from Google Trends, we can see that “buy bitcoin” has become a more popular search term than “buy gold”. Even the followers of former member of the U.S. House of Representatives Ron Paul (an avid gold bug) have shown in a recent poll on Twitter to prefer Bitcoin over gold as a store of value. 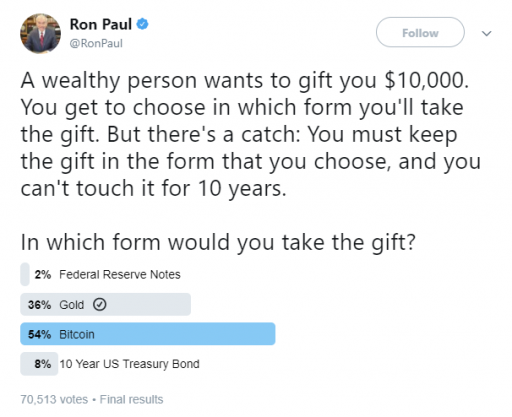 Bitcoin as a Means of Payment?

Back when Bitcoin was not as popular as today, people thought it would be an ideal means of payment, since it is completely digital and peer-to-peer from anywhere in the world, without any intermediaries such as banks or the IRS looking over your shoulders. This virtual currency would combine the privacy of cash payments with the ease of online payments, while Bitcoin became increasingly easy to purchase and use.

Yet, as I wrote earlier, Bitcoin does also have important disadvantages. Because of the way in which the network is built, Bitcoin can only handle a maximum of seven transactions per second. If the number of users – and, as a result, the number of transactions – were to increase, the waiting time for payments to process and settle would increase as well. And this is at a time when Bitcoin is not even widely used as an everyday means of payment in the real economy. Most transactions stem from investors and speculators that wish to buy or sell.

When the Bitcoin price suffered a 20% correction last November, we could observe an increase in processing time of various hours. To execute a high-priority payment, you were forced to pay (the equivalent of) $10 dollars in transaction costs. You might imagine that with transaction costs being that high, it is becoming less enticing to use Bitcoin as a means of payment.

As a means of payment, Bitcoin will not be a threat for “conventional” money, since its transaction costs are simply too high. Perhaps there are other cryptocurrencies that have less trouble scaling up, but even if they exist, they are far from becoming as popular as Bitcoin is nowadays. Why is it that Bitcoin prices have increased over the past six months as much as they did?

Bitcoin as a Store of Value

Ever since the limitations of Bitcoin as a means of payment are becoming increasingly known among the general public, Bitcoin advocates have taken a different turn. The virtual currency is now often praised as an alternative store of value, a type of electronic alternative for gold. Both are, after all, scarce and cannot be printed by governments or central banks.

Just as the gold price is not primarily determined by its industrial uses, Bitcoin prices are not determined by Bitcoin’s intrinsic value either. Both assets derive their value from something else: the confidence of being able to find a buyer whenever one wants to sell.

Gold has been widely known for a couple of thousand years as a reliable store of value, because it can always and under any circumstance be bought and sold and because it never lost its entire value. Even up till today, the precious metal represents a safe haven, which is proven by the fact that the world’s most important central banks still hold gold reserves.

Gold has withstood many crises with flying colors and owes its stability over time to the fact that it is rarely moved. The gold reserves of central banks are seldom touched, while any gold that was once converted into jewelry is also seldom exchanged.

Cryptocurrencies do not yet have such stability, because they have only been in circulation for a few years. Bitcoin was introduced after the last financial crisis erupted and therefore never experienced such an extreme scenario as in 2008. For now, we do not know how cryptocurrencies will react to a full-blown financial crisis. Therefore, it might be too early to consider them an appropriate “store of value.”

One of the problems of Bitcoin is that they are currently being held by a small minority of people. According to the most recent data from Bitinfocharts, more than 38% of all Bitcoins are in the hands of a mere 0.01% of all users. This means that when you invest your savings in cryptocurrencies, you are at the complete mercy of the whims of a small group of very wealthy private investors, who could sell their positions at any time and depress prices.

Of course, gold reserves are - to a certain extent - also concentrated in the hands of a few (approximately 20% of all the gold in the world is held by central banks), but that concentration is far less extreme than in the case of Bitcoin. Add to that the fact that it is highly unlikely that central banks will suddenly bring large quantities of gold to the market. To me, the chance of this happening seems smaller than the chance of a few large private investors who want to take profits on their Bitcoin holdings and depress prices.

Ever since cryptocurrencies began an impressive rally, the interest in gold has declined significantly. Recent data from various mints confirm that the sales of investment coins has been weaker this year than in earlier years. In the meantime, Bitcoin attracted the attention of the mainstream media. As a contrary investor, I would therefore be tempted to take a (partial) profit on cryptocurrencies and buy undervalued precious metals such as gold and silver.
Share this article