Past week I had the pleasure to spend many hours with one of the investors I admire most, legendary contrarian and adventurer Jim Rogers. He visited Guatemala for a few days, as he was invited by the Francisco Marroquín University to accept his honorary doctorate (honoris causa). Jim Rogers is the author of many books, including “Hot Commodities: How Anyone Can Invest Profitably in the World’s Best Market,” and invests in gold since the late 90’s, just before the great commodity bull market started. What did he tell me? And what is, according to him, the current outlook for gold?

From Humble Beginnings in Alabama to Wealthy New Yorker

Jim Rogers started in 1973 together with George Soros the Quantum Fund, one of the first truly international hedge funds. The fund was a great success. After ten years, the fund returned over 4200%, while in the same period the S&P 500 barely went up. After making his first million on age 35, Jim Rogers continued working for a while, but retired as soon as he had the amount of money he deemed enough.

Their secret? Leverage. As much leverage as the regulator would allow. In the 70’s, Jim Rogers and George Soros mostly invested in shares of energy companies (in the midst of the oil crisis). With the help of a fair share of borrowed money, Rogers and Soros succeeded in the 70’s to earn returns that would make any investor jealous.

A Good Investor Does His Homework

There he was. He wore a white suit, binders with images of dollar bills, and of course his famous bow tie. While he is handed a half liter bottle of Coca Cola, Jim Rogers shows he did his homework before arriving in Guatemala. “Guatemala was declared independent in 1821, correct?” he asked the young female Guatemalan reporter. She nods affirmatively. I was asked to interpret questions and answers from Spanish to English and the other way around.

Years ago, Jim Rogers taught me that a good investor needs to do his homework before doing anything, and the same applies in other life areas as well. “May I suggest you will never get anywhere if you do not do your homework?”, he wrote me. That was six years ago, in 2010.

But Jim Rogers walks his talk.

When he attended an exclusive dinner, on invitation of the university, after three terribly tiring flights that took him through four continents, Jim Rogers was not the one answering questions; he was the one asking them. How does this country work? Why does it work? Or why doesn’t it? He wanted to know as much as he could about Guatemala. This contrarian investor has reached the respectable age of 73 years, but his curiosity about the world hasn’t diminished. And sincere curiosity is, without a doubt, a quality that good investors ought to have.

The Next Crisis Will Be Worse Than the Last

“The difference with 2008, is that the (public) debt is now even higher than it already was,” notes Rogers. “Do you even remember the crisis of 2008?” he followed up on the newspaper reporter. “Not really,” she answers. “I thought so,” responds Rogers.

Being a contrarian, not just in investing, but also in life, is the secret recipe of a successful investor. Finding hated investments, investments nobody wants, but which have some well-founded reasons to be optimistic about. In short, an investment everybody hates, but where a change in sentiment in the (relatively) short run is forthcoming.

Buy low, sell high, but to the extreme. Even despite the fact that it is increasingly difficult to find undervalued investments, because central banks are conducting the largest monetary experiment in the history of the world.

Japan Is Already in Recession, Other Economies Will Follow

The Japanese economy has been in recession for the past few quarters. Shinzo Abe failed to succeed in getting the economy on the right track. In many respects, it appears as if the Japanese are one step ahead of other central banks. Japanese monetary policy is extreme, and has been extreme for a while, and it seems to be an indication of what other central bankers around the world, for instance in Europe and perhaps even the US, are planning to do.

According to Jim Rogers, the recession in Japan is a sign of what is coming elsewhere. The Chinese and US economy are already slowing down, while some European countries are running into trouble as well.

Commodities will without a doubt outperform (Western) stock markets and bonds, according to Rogers. But in the short run (he calls himself the world’s worst market timer), he fears commodity prices might drop.

Let’s look at gold. The gold price has had a few amazing months, but according to the author of “Street Smarts,” this does not mean that the correction in gold prices has ended. It might even be the case that gold prices haven’t bottomed so far (the gold price reached a low of $1,050/oz). Recently, the gold price broke, in a similar fashion as its last rally, through the $1,300/oz-barrier, after which the rally ended and the gold price declined again. This time around, the gold price can go down as well, so argues Rogers.

The scenario that he foresees, is a scenario in which the world falls back into recession (Japan is already in recession), the dollar as a safe haven gets stronger, and commodities (and gold) initially decline. But even then it is, according to Jim Rogers, smarter to have money in commodities than in other asset classes, because stock and bond markets will crash and decline substantially.

Jim Rogers owns gold, but is not a buyer for the moment. He will buy, though, if and when gold prices correct. He also argues that silver is an even more interesting investment, because silver is further below its record high than gold.

Despite the fact that some people think that interest rates will never go up, Jim Rogers has no doubt: sooner or later rates will go up. When the market has seen enough, rates will rise, and the economic damage that has been done over the past years (or even decades), will become visible.

We might have had a preview of what is coming in the US shale oil industry, as I noted earlier. Despite the record low interest rate at the Fed, companies in the US oil sector are forced to pay as much as 20 percent (!) for debt. It appears fundamentals still count.

While we were driving to an enormous 3D map of Guatemala near the old city center, made in 1910 by two engineers traveling and measuring the country, I asked Jim Rogers where he would live if he weren’t 73 years old, but 30. “North Korea”, was his answer, without even hesitating for a second. “The same is happening in North Korea right now as in China in 1981.”

He is referring to the fact that North Korea is opening its borders. The North Korean economy is being liberalized, like China after Mao. Five years after the death of Mao, the Chinese began to open up, one step at a time, to the world. That process is still in progress, but in many (economic) areas, the Chinese economy is already more liberal than many of its Western counterparts.

If people will take Rogers’ advice to heart is to be seen. But it characterizes the contrarian and o-so profitable investment philosophy of Jim Rogers. 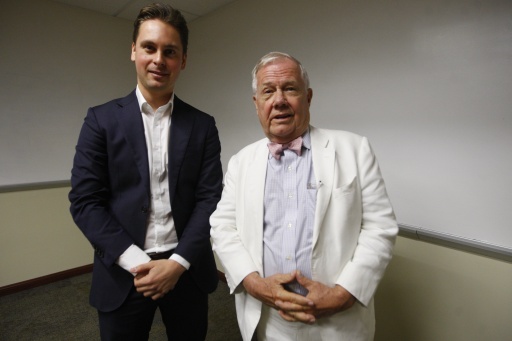