The Federal Reserve ended its QE3 large-scale asset purchase program already in 2014, which consisted of monthly purchases of billions of US Treasuries and mortgage-backed securities (MBS). But the Fed never did really end QE. The Fed reinvested the principal of maturing bonds automatically into new bonds. The Fed´s balance sheet thus never shrunk. Until this month. The Fed has now finally decided to no longer automatically reinvest the principal of maturing bonds. The grand finale of QE is beginning and, in a certain sense, it is only beginning now. How will the Fed´s balance sheet reduction be executed and what will be the consequences?

The Trajectory of the Fed´s Balance Sheet

Besides the fact that we can currently expect one more rate hike later this year (in December), the Fed will begin to gradually reduce the size of its balance sheet as early as this month.

Or put in the Fed´s very own words:

Over time, this implies that the Fed´s balance sheet, in theory, will be reduced significantly yet slowly: 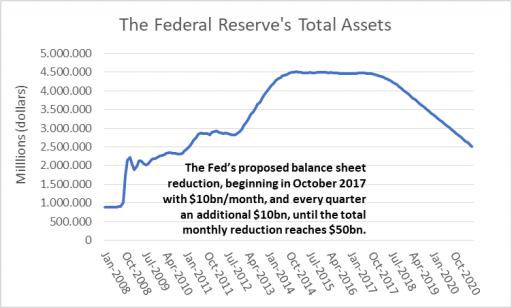 There is, by the way, not even consensus among Fed board members whether the central bank should even shrink its balance sheet. Former Fed Chair Ben Bernanke was, for instance, of the opinion that maintaining the balance sheet at its current size was a far better option. According to Ben Bernanke, and also ECB Chair Mario Draghi by the way, the Fed can simply adjust the interest rate it pays to deposit holders (generally commercial banks) without any need to reduce the balance sheet.

However, the Fed is not the only central bank that is modifying its balance sheet. If we, in addition, include any changes in the balance sheet compositions of other major central banks (mainly the ECB and the Bank of Japan, or BoJ in short), we will see that, in net terms, central banks are still expanding their balance sheets: 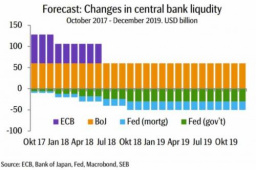 Curiously enough, the dominant logic at the Fed appears to be the idea that, since it in this case does not directly sell bonds in the market but simply holds bonds to maturity, the impact on markets will be less than if they were to sell assets directly in the market. That this idea is close to insane, is proven by the fact that the US Treasury must roll over the maturing bonds and refinance them, you can guess it by now, in the market. And whether it is the Fed or the Treasury who turns out selling the bond, is rather immaterial for interest rates.

The most important consequence of the Fed´s balance sheet reduction is higher interest rates on long-term debt. And the Fed will, one way or another, reduce demand for long-dated debt.

But with higher interest rates, the US economy is bound to plunge back into an economic slowdown. Many businesses on the margin will get into financial trouble. Businesses that, for now, have been relying heavily on capital markets to finance their negative cash flows, such as Netflix and Tesla which we both discussed last week, will no longer be able to finance their deficits on financial markets.

But will the next rate hike be significant enough to have any impact upon financial markets?

Whatever the answer may be to that question, higher interest rates in the US translate into a stronger dollar. After a correction to an EURUSD-rate of 1.21, the tide now seems to have turned in forex markets. The dollar rallied to 1.17 in the course of a week. And that trend will, according to my judgment, be sustained.
Share this article