While everyone was distracted by the festivities of December, the yield curve in the United States went virtually flat. Stock market prices dropped further and this time around China appears unable to make up for economic slack elsewhere. In China, all signs are turning red: retail sales are growing at the slowest pace in 10 years, the real estate market is falling again, auto sales are on the decline, and the purchasing managers’ index (PMI) fell below 50, which points at a contraction of industrial activity. In other words: this time around, China will not be able to compensate for a slowdown of the U.S. economy. Indeed, 2019 might not turn out to be a very positive year for stocks at all.

Apple shares had their worst day since 2013 and both the Dow Jones and S&P 500 closed again in the red, with the latter collapsing to a level of 2450 points. The sales growth revisions by Apple, led investors to fear that the economy will not hold much longer and that the longest bull market in the history of stocks will come to an end rather sooner than later.

Observe for a moment the current yields on U.S. government debt:

The first remarkable fact is that the 10-year Treasury rate is close to touching the 2.5%-level. I call this remarkable, because the 10-year rate was halfway 2018 still standing at 3.2%. In a matter of months, the most important interest rate in the world dropped roughly 60 basis points, while economists have been predicting, to no avail, higher 10-year rates for seven long years.

The second remarkable fact is that the yield curve is already partly inverted. The 2-year, 3-year and 5-year rates are below the 12-month and 6-month rates. This is extremely rare and something that can practically only be observed just ahead of a recession. Under normal circumstances, the yield curve has a positive slope. An inverse yield curve points at increased odds of a recession and a stock market crash.

The third and last remarkable fact is that the three rates which are normally used as recession predictors are dangerously close to one another as well as close to inverting. There remains only a slight difference of 20 basis points or less between the 3-month and 10-year rate, whereas the spread between the 2-year and 10-year rate is just as narrow. In other words, if this trend continues, the most important signals of the global economy turn red. 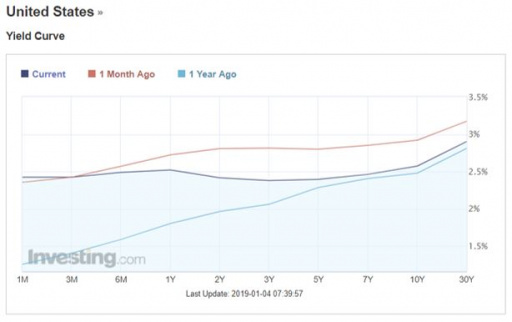 For How Much Longer Can the Global Economy Hold?

An inverted yield curve is step one. After the yield curve inverted at the onset of the 2008 crisis, it took roughly two years before the Great Recession truly reached its heights. This time, I expect that it will not take as long as it did in 2008. Markets are already walking on their toes and everybody is fully aware that this has been the longest bull market in history. This would mean that the current drop, I assert, will not lead to an enormous rally (enormous as in new and significant record highs), but on the contrary to a – gradually – increasing correction and eventually a crash.

Frontrunning what might be coming, the gold price had an impressive streak. The gold price again broke through the $1300 per troy ounce barrier – for some an important psychological level. Thus, December turned out to be not just an excellent month for retailers, but also for gold investors. And gold is, for the moment, continuing its excellent performance into the new year.