Since quite a while ago, I have been anticipating this remarkable moment. The – for me – most important economic warning sign has turned red: the yield curve inverted and, as a consequence, short-term interest rates in the U.S. are now higher than long-term rates. All the while gold prices dropped by twenty dollars, close to a level of $1,290 per troy ounce. Motive? The dollar strengthened to €1.12 and came near a three-week high.

In earlier contributions, such as The Yield Curve Just Keeps Getting Flatter (and Analysts Keep Looking for Excuses) (published in December 2017) and Fed Raises Rates; Flattens Yield Curve (published in June 2017), I wrote extensively about this rather unusual phenomenon:

“The yield curve remains as informative as always. The impressive track record of this important recession indicator will prove itself yet again. It is only a question of time before spreads become negative and the yield curve inverts. And this time around, an inverted yield curve will just as in earlier times indicate that we are on the brink of a new recession. A recession that has been due for some time now.”

Ever since a little less than two weeks ago, the moment has arrived: short-term interest rates are now indeed higher than long-term interest rates. This meant an entire day of all types of press attention. Interviews on CNBC, multiple articles from Bloomberg and the Wall Street Journal, and tweets of a wide range of market participants. A week later, however, much is forgotten. Suddenly, no one seems to mention or care about the yield curve inversion anymore. And even fewer people seem to have taken any concrete steps after this warning sign, with an almost perfect track record, has begun to flash red.

The current yield curve in the United States: the 3-month rate is higher than the 10-year Treasury rate. Source: Investing.com 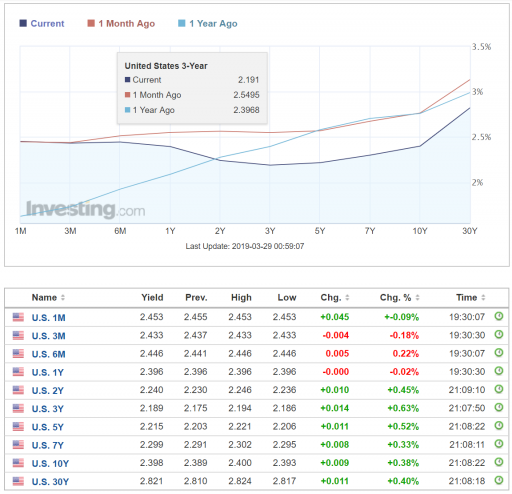 Why Does the Yield Curve Invert?

What virtually no one seems to grasp, is why the yield curve inverts in the first place. The dominant logic is that the Fed directly causes the yield curve to invert (wrong, as you can read in my earlier contributions) or that short-term rates rise because of underlying financial troubles that seem to pop up out of the blue: corporates and commercial banks suddenly demand short-term credit to fill the gaps that suddenly appear out of nothing. But even the latter is not the entire story.

Banks dedicate themselves to a very peculiar business model. They raise short-term (zero maturity) capital (your bank deposits, in fact) while using these funds to invest in long-term credit or loans (for example, long-term mortgage loans or commercial credits). This is what we call maturity mismatching, because the maturities of bank assets and bank liabilities no longer match.

This is also the reason why our banking system is so incredibly fragile. Whereas historically there have been little to no defaults in so-called money market mutual funds (MMMFs), we have witnessed a tremendous series of spectacular bankruptcies of banks (just remember for a moment the 2008-crisis and the defaults of many, many banks, among which the memorable Lehman Brothers).

Banks arbitrage the yield curve. By raising short-term capital, short-term rates gradually rise and by lending long-term, long-term rates drop. This type of arbitrage persists until an extreme is reached and such maturity arbitraging is no longer profitable. This is also the reason that credit spreads (risk spreads) tend to fall over a business cycle, effectively being another side of the same coin.

Nevertheless, while banks arbitrage the yield curve, and long-term rates as a result drop, the composition of the economy changes consequently. Against lower long-term interest rates some projects – which previously did not seem profitable – suddenly become profitable. Because of a lower discount rate, especially longer-term and more capital-intensive projects are undertaken. These types of projects become proportionally worth more than projects that require less capital and time.

Unfortunately, this does not change the fact that interest rates are a price for time and patience. Interest rates – free-range and organic interest rates – ought to reflect the time preferences of individuals. Whenever we save more (and, as a result, have a greater preference for the future), rates fall and long-term projects become relatively more profitable. But in this case – due to the intervention of the banking system – long-term interest rates fall without any change in our time preferences. Entrepreneurs, businesses and analysts act – understandably – as if consumers have become more patient.

In the period that precedes a recession, rates and spreads drop and money is invested in the wrong projects. That is the crux of the matter.

The fact that the yield curve has now inverted, is a sign that businesses and entrepreneurs are gradually coming to the conclusion that the investments they’ve made are erroneous (and as a result they might demand more short-term credit), whereas banks now own assets with much longer maturities than was the case at the beginning of the economic cycle. This also implies that 2008 can, surely, be repeated. Moreover, long-term rates are now falling because there is less demand for long-term credit and because investors are starting to opt for safety by buying 10-year US Treasuries.

The same complacency that could be observed on stock markets after the inversion of the yield curve, can also be noted in the gold market. Yes, gold prices fell somewhat, by approximately twenty dollars to be precise. Any decline might sound unpleasant. But these twenty dollars are completely insignificant in the “bigger picture.”

Since 2013, gold prices have moved completely sideways: every day, gold prices increase or decrease a bit, but we have not advanced anything compared to a few years ago. Such periods of complacency and little change are, however, consequently followed by periods of high volatility and rapid change.

My strong conviction is that we are on the brink of such a period of rapid change. Yes, gold prices could increase or decrease within approximately the range in which gold prices have moved over the past five, six years. But the real breakthrough is approaching increasingly rapid. And the yield curve is a witness of that. The countdown has begun.