Earlier, the IMF proposed a one-off 10 % tax on savings. But isn’t gold also vulnerable to confiscation? I will explain why you do not have to worry about a possible gold confiscation. We will also take a look at the odds of a confiscation of savings.

The Dormant Fear of Gold Confiscation

For one reason or another, there is always a fear lurking among gold investors that governments, in the future, will confiscate gold. This persists even though the risk of gold confiscation is so miniscule that it isn’t worth paying much attention to. Potential foreign exchange controls and the confiscation of savings are of much greater importance.

A Glance at the Past: the 1933 Confiscation of Gold by President Roosevelt

Roosevelt’s intentions were clear; he blamed the strong dollar for having caused the Great Depression. He thought that devaluing the dollar would solve the problem. But today’s situation is quite different; back then gold was convertible into physical gold. The U.S. dollar was basically a receipt that could be exchanged for physical gold, the real money.

Today, central bankers can devalue their own currency by a simple press on a button. Under the gold standard, this was impossible. At that time, there was only one way out: confiscate all gold, and raise the 'price of gold,' or in other words; ''decrease the value of the dollar.'

Strictly speaking, confiscation means a seizure without any form of compensation. However, realistically speaking, we know that governments always pay too little. For practical reasons, we thereby consider terms such as confiscation, seizure and nationalization as synonyms.

A confiscation of gold is always accompanied by a prohibition of gold possession. Taking an insurance 'against confiscation' is, beyond the doubtful chance of ever receiving a payout, absurd, considering it will be illegal to possess gold after it is confiscated.

In 1934, Roosevelt completed his confiscation oeuvre by the 'Gold Reserve Act,' in which the gold price was raised from $20.67 to $35 per troy ounce; an unequivocal 40% devaluation. Roosevelt wanted to have unlimited power over the money supply in order to give people the illusion that the economy was growing. This wasn’t the case; the economy only grew in nominal terms, not in real (corrected for inflation) terms.

The 1934 Confiscation of Silver

What is not well known is that President Roosevelt also confiscated silver, even though it was not legal tender at that time. The objective was the same; to achieve a larger monetary inflation.

In an attempt to increase the money supply, the confiscated silver was used to insert a new type of legal tender in the economy: silver coins and silver certificates. The 1934 confiscation of silver turned silver into a monetary precious metal again, a role that previously was held exclusively by gold.

Silver would remain to be a monetary metal until the early 1960s.

Why the Confiscation of Gold Is Not a Serious Threat

However today, President Obama and Fed Chairwoman Yellen do not have to confiscate gold in order to devalue the dollar. With a single press on a button, Yellen can create all the dollars she would like. In contrast to her predecessor in 1933, her power is not limited by the gold standard or other rigid reserve requirements. The Fed can do anything it would like. Infamous central banks like, in recent time, the Banco Central de Venezuela (BCV) preceded the Fed in the 21st century.

Gold no longer limits the power of governments and central banks to spend, lend and inflate money. As a result, there is no reason why governments would want to confiscate gold, or even pay attention to it.

In sum, under our current monetary system, a government does not need to confiscate gold to devalue its currency. The only reason to confiscate gold is a complete collapse of the currency (a 'crack-up boom,' in the terminology of economist Ludwig von Mises).

However, it is important to note that a complete collapse of a currency is certainly not in the interest of the status quo. For Janet Yellen, other Fed directors, and the U.S. President Obama, the end of the dollar would certainly not be a blessing.

The Dutch Emergency Act Financial Transactions and the Confiscation of Gold

Many Dutch gold investors are familiar with the 1978 Noodwet financieel verkeer (Emergency Act Financial Transactions). For some investors, it is the reason to fear a confiscation of gold, and to hide their gold in their backyard.

But what is the actual content of this emergency law?

Chapter XII International Financial Transactions contains Article 26 of the Emergency Act. It states: "Our Minister is authorized – if deemed necessary in violation with other statutory regulations – to issue regulations regarding foreign financial relations, as well as to demand gold coins, fine gold, gold alloys (unprocessed or semi-finished alloys) and foreign assets of inhabitants. Unless he deems it impossible due to extraordinary circumstances, he only executes these powers in agreement with Our Ministers of Foreign Affairs, Economic Affairs and Agriculture and Fishery."

Readers who grasp economics understand that this emergency law refers to a situation that I mentioned earlier; the crack-up boom, a total collapse of a currency. Think of the Weimar Republic (Germany) in 1923, Argentina in 2002 or Iceland in 2008 (I recommend the book Deep Freeze: Iceland's Economic Collapse  from my esteemed colleagues Philipp Bagus and David Howden).

Regardless of what happens to the domestic currency, gold will always be accepted internationally by creditors. The same applies to foreign assets; cash or stocks. Nobody wants worthless marks, pesos or crones. But they will accept gold or valuable assets denominated in valuable foreign currencies.

Be Concerned about Foreign Exchange Controls. Don’t Worry about a Possible Confiscation of Gold

Governments want to have control over the official currency. In 1933, this was gold. Today, it is the dollar in the United States, and the euro in the Netherlands. Governments want to control cash flows, and that is why you should fear the confiscation of savings, as well as controls on the use of money instead of a gold confiscation.

From this viewpoint, we should also notice the trend to prohibit cash transactions. By keeping more money within the banking system, banks can lend more credit by creating deposit currency. Furthermore, money withdrawals can be stopped or restrained within a matter of minutes.

A big problem when confiscating gold is that few people actually hold gold nowadays. A confiscation of financial wealth, just by looking at the quantities, makes more sense. But you cannot simply 'confiscate' financial wealth. It would trigger a gigantic fire sale on the financial markets. An enormous financial crisis would be the result.

Only the liquid savings are there for taking.

These are easy to confiscate. Tomorrow the government says that now 10% of all savings is the government’s property, by calling it a 'crisis tax,' and the job is done! The only thing that has to happen is a small correction in the books of commercial banks. There are no further consequences beyond the impoverishment of savers. And those are the same savers who are already having a hard time, given the easy-money policy of central banks around the world.

Restrictions on Money Is a Current Problem, Not a Future One

Controls on money are not a potential future problem. Foreign currency controls, to a large or small extent, do already exist in almost every country. Almost everywhere, we see controls on:

If these aren’t foreign exchange controls, what are they?

Foreign exchange controls will probably become stricter in the future. It would be wise for wealthy investors to avoid being hurt by this trend by spreading their money internationally. Even if you’re worried about a gold confiscation, you can manage this risk by depositing your gold in different locations in the world. With us, you can spread your risks by diversifying; you can store several precious metals (gold, silver and platinum) in multiple safe locations (Amsterdam, Frankfurt, Zürich and soon Singapore).

For investors with more modest means, it may be a smart thing to investigate the option to obtain a second passport as protection against future restrictions on our (economical and perhaps political) freedom. 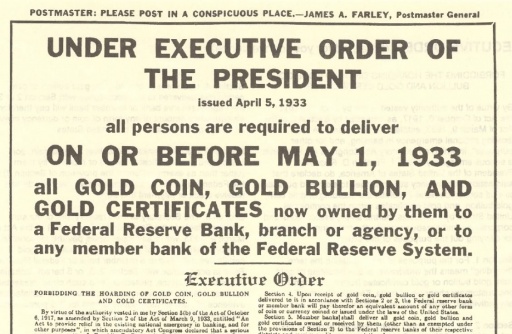