After the gold price closed below $1300 per troy ounce earlier last week, the gold price broke through the $1300/ounce barrier on Friday. The reason was clear: after peace between North and South Korea seemed a matter of time, peace negotiations went sour yet again. After weeks of peace talks between north and south, which should have resulted in a meeting between Kim Jong-Un and Donald Trump on June 12th in Singapore, Trump decided to cancel the Singapore summit due to “open hostility” from the North Korean delegation. “[T]he Singapore summit, for the good of both parties, but to the detriment of the world, will not take place,” Trump wrote in a letter to Kim Jong-Un. The seemingly never-ending conflict with North Korea appears to remain unresolved for now.

After being hostile to the outside world for decades, especially against neighboring South Korea, suddenly there was a twist of fate in the North Korea conflict. The North Korean leader, Kim Jong-Un, who spent his early years in Switzerland, suddenly appeared willing to sacrifice his last resort and ultimate line of defense that has maintained his communist regime over the years: North Korea’s nuclear arsenal. The reason that the United States (and South Korea) never achieved to gain a grip over North Korea, is precisely because of a nuclear threat. One wrong move and Kim Jong-Un could reach for a nuclear retaliation which could cost hundreds of thousands or even millions of innocent lives.

So, why this sudden shift?

Trump initially received all the credit. What other political leaders failed to achieve over the past decades, Trump achieved in a mere two years’ time: to bring the North Koreans on their knees. In twenty-five years, Bill Clinton, George Bush and Barack Obama failed miserably. And if Obama received a Nobel Peace Prize, something which should most definitely raise the eyebrows of a true defender of peace, then certainly Donald Trump must receive a Nobel Peace Prize as well? It was Trump’s slick and clever negotiation techniques that brought “Little Rocket Man” (as Trump called Kim Jong-Un on various occasions in his tweets) to his knees. “I won’t fail,” said Trump boastful. 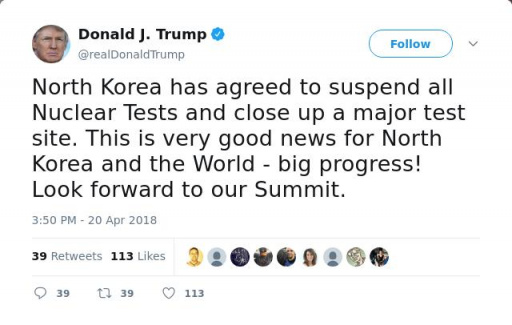 Trump’s tweet that seemed to point at an end of the long-standing Korea conflict: Kim Jong-Un agreed to closing the nuclear test site and putting an end to all nuclear tests.

But not so fast. This might be the story that caught the eye of the mainstream press, but there might be more to it. Say, for instance, that Kim Jong-Un had no other choice and took advantage of the opportunity that presented itself.

And according to a group of Chinese scientists, this was indeed the case.

To be a bit more precise: two independent groups of Chinese scientists think that this was the case. One of the two groups warned that the Punggye-ri test site came to a point of near-complete collapse. According to a Japanese TV channel, over 200 North Koreans died in a tragic accident after several tunnels collapsed as a result of a nuclear test. According to some accounts, the test site was completed destructed in one of the recent nuclear tests and can no longer be used for new tests.

At least six nuclear tests were conducted in Punggye-ri in the Mantap mountain, which has now become increasingly and dangerously instable after nuclear tests produced artificial earthquakes. According to a Chinese geologist, things went sour after an explosion almost 700 meters below the Mantap mountain peak: part of the mountain collapsed, and the mountain was turned into a pile of small fragments.

The Mantap mountain was the ideal place for conducting nuclear tests: more than 2100 meters above sea level there was enough space for secretive nuclear tests. Until things went wrong during a recent test. It seems that this nuclear test site has become completely useless for future tests. Moreover, the Chinese seem to have become involved and insist on ending further nuclear tests: new attempts at the Punggye-ri test site could wake the active Changbai volcano, which is located on the North Korean border with China.

At first glance, this accident seemed to have led to a destruction of one of North Korea’s most important nuclear test sites. And it seems as if Korea does not have the resources to restart nuclear tests at other sites. Nonetheless, North Korea continues to insist that the destruction of the Punggye-ri test site was anything but an accident! Acccording to the North Koreans, blowing up the tunnels of Punggye-ri was a deliberate act and a show of good will.

Kim Jong-Un’s Willingness to Negotiate Perhaps Not a Coincidence

In sum, it could perfectly be that Kim Jong-Un’s sudden preparedness to negotiate (with closing a test site and ending nuclear tests as “concession”) might be the consequence of pure necessity rather than Trump’s superior negotiation techniques or Kim Jong-Un’s ambitions for world peace.

The fact that the collapse of one of North Korea’s most important nuclear test sites made renewed nuclear tests virtually impossible in the short run, seems to provide Kim Jong-Un with enough motives to express a willingness to negotiate with its southern neighbors and the United States. In the end, it could be perfectly possible that Kim Jong-Un is simply trying to buy time, with the hope of, in say twelve months, resuming Korea’s nuclear tests.

Nonetheless, after the North Koreans called the American vice president Mike Pence a “political dummy,” Trump decided to cancel the Singapore summit. After Trump cancelled the Singapore summit, the North Korean Vice Foreign Minister Kim Kye Gwan reacted “disappointed”: “[Trump’s] sudden and unilateral announcement to cancel the summit is something unexpected to us, and we cannot but feel great regret for it”, he said. It seems somewhat ironic that Trump of all people cancelled the Singapore summit because of the term “political dummy,” after he called Kim-Jong Un “Little Rocket Boy” and “fat and ugly” on earlier occasions.

Taking everything account, it appears as if the North Koreans are more than anything eager to buy time rather than to make peace.

Even if the Singapore summit takes place on June 12th with Kim-Jong Un and Donald Trump both present (the North and South Korean leaders had a surprise meeting on Saturday in an effort to save the Singapore summit), then an extension of the geopolitical tension around North Korea still seems almost guaranteed. Kim Jong-Un took advantage of his failed nuclear test and the accidental destruction of the tunnels at the Punggye-ri test site as bargaining chip to prove “good faith.”

In fact, Kim-Jong Un seems anything but to act in good faith: he simply ran out of options after his capacity of conducting further nuclear tests became severely impaired. Lengthy negotiations and to cause back and forth delays to buy as much time as possible therefore seems to be North Korea’s maxim for now.

And the absence of a permanent solution to the long-standing conflict with North Korea is good news for gold prices. That is why we saw a (probably short-lived) rally in gold prices.