Last week, I wrote that it was highly uncertain whether the Fed, as it had promised, would raise interest rates twice more this year. The fact that gold prices initially reacted positively on the rate hike in mid-March, might indicate that the gold market also questions the future rate hikes that the Fed promised.

I finished last week by saying that I would comment on another fact of utmost importance with repercussions for precious metals markets. Here it is.

As I said before, the Fed raised interest rates from 0.75 to 1 percent in March. This new target range means that U.S. monetary policy, from any point of view, ought to be called very expansionary. But, you might be thinking, what mostly counts in this matter are the future expectations regarding the Fed rate. That is completely correct! But we would still leave out the other half of the story.

If we do this exercise with the figures for March this year, we arrive at the following outcome: the Fed rate equals, as mentioned earlier, 1 percent. The US inflation rate equals 2.7 percent in February (the most recent figure). This means that the real Fed rate currently equals -1.7%, not only far below zero percent, but miles away from the average real rate since 1984, which equals +2.7 percent. Economists estimate that the neutral real rate in the U.S., that is, the rate at which inflation neither increases nor decreases, would currently be somewhere between 1.5 and 3.5 percent. 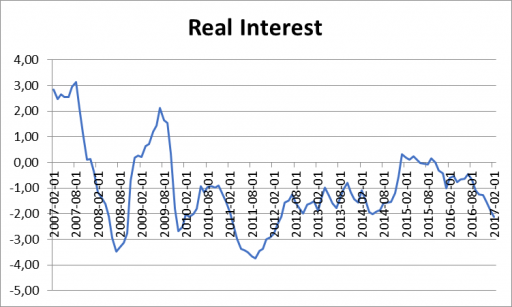 If we assume an annual inflation of between 2 and 2.5 percent in 2018, and at the same time assume that the Fed raises the official rate three times this year – personally I consider this to be a remote possibility – then this would still mean that real rates in the U.S. would be around the zero percent in 2018 and – more importantly – far below the level of the estimated neutral interest rate.

Real Rates Are What Matters, Silly!

Why should all this be relevant for the gold price? Because, as I said before, the gold price tends to rise when monetary policy is (extremely) expansionary. The below chart is a clear demonstration of this tendency.

In the below chart, the nominal official rate and U.S. inflation, together with the gold price since 1970, are shown. It is clear that whenever inflation exceeds the Fed rate (which means that the real rate was negative), the gold price, with a small lag, skyrockets.

If history is any indication, fully acknowledging the fact that the real official rate in the U.S. is far below 0 percent and that is highly likely that this rate will reach, at most, 0 percent this year and next year, then it would not surprise me that gold prices continue to go up in that same period. Of course, the real rate is not the only factor that influences the gold price. Having said this: it is, overall, still an important factor.

Edin Mujagić is macroeconomist, monetary economist and publicist. He is the author of the Dutch book ‘Geldmoord: hoe de centrale banken ons geld vernietigen (Money Murder: how central banks destroy our money)’ (2012)and has worked as economics editor at the business magazine FEM Business.