Recently, the Fed decided to pause its interest rate hikes. The Fed funds rate, in this case. Better yet, the Fed decided to … lower the – from my perspective – most important policy rate! As soon as you read this article and understand why the Fed actually lowered rates, you will also understand why the Fed is losing its control over interbank interest rates.

What Is the Fed Funds Rate?

Remarkable was, first of all, that the Fed saw the yield curve invert (the 10-year rate went below the three-month rate yet again). But in the background, something even more remarkable happened.

Before I can explain precisely what is happening, it is important to understand what the Fed has changed since the 2008 crisis.

The Federal Reserve “determines” interest rates in the United States. To make a long story short: the Fed specifically determines the Fed funds rate. Fed funds are demand deposits of commercial banks – member banks – at the central bank. Some banks have an excess of such Fed funds, other banks have a (temporary) shortage of Fed funds, and by means of an interbank market every bank should be better off.

Now let us assume that the Fed (the FOMC interest rate committee) thinks interest rates are too low and that interest rates should not be at 1%, but at 2%. How should the Fed proceed to raise rates from one to two percent? Until 2008, the Fed simply reduced the available market supply of Fed funds – by neutralizing Fed funds by selling assets to its member banks (member banks pay for these assets with Fed funds) – and, as a result, the Fed funds rate rises (less supply = higher price). The Fed sells assets until it reaches its two percent interest rate target.

In 2009, quantitative easing put an end to this mechanism. Quantitative easing consists of massive asset purchases by the Fed paid for with – you might have guessed it by now – Fed funds, or deposits at the Fed. Suddenly, the Fed could no longer set the Fed funds rate, because a super abundance of Fed funds brought the market completely out of balance. The Fed’s old customs were no longer effective.

The Fed Funds Rate Still Exists, But Its Essence Has Changed

How did the Federal Reserve solve this problem? The Fed essentially began to pay interest on its deposits, which commercial banks hold at the central bank. This should function as a price floor; after all, if the central bank pays 2% on these deposits, banks wouldn’t have any incentives to lend money at lower rates on money and capital markets.

As a consequence, the Fed said: instead of the interest rate we pay on deposits (the so-called IOR rate) being a price floor, it is a price ceiling! The price floor, then, is the rate that the Fed pays for borrowing back Fed funds (where the Fed neutralizes “Fed funds” and temporary surrenders an asset as collateral) – also referred to as reverse repos.

And Then the Fed Wanted to Raise Interest Rates …

All this seemed to make perfect sense until the Fed began raising interest rates. Of course, the IOR rate (the rate that the Fed pays over its Fed funds) can be raised quite easily. But the Fed funds rate did not follow the same path, and as a result the Fed had to raise its rate floor (the RRP rate).

How does the Fed raise its rate floor? By introducing more reverse repos – or, in other words, by neutralizing more Fed funds.

This is what you can observe in the below chart by looking at the blue line. To raise Fed funds somewhat, a lot of reserves (Fed funds) had to be neutralized through reverse repos. 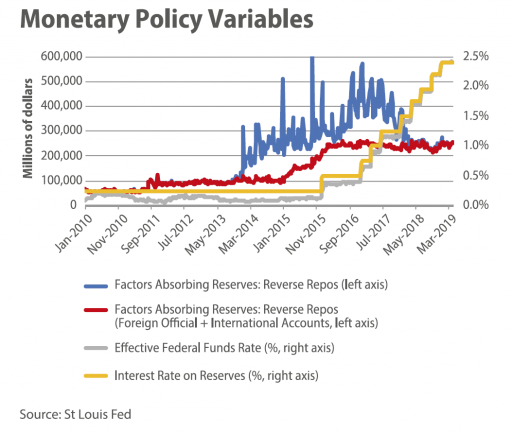 At first, this shift was cheeringly welcomed by the Fed. Until the Fed realized that the Fed funds rate could easily rise even further. And that is how it became clear that Fed is losing its control over interest rates.

After all, take a good look at our above chart, and especially at the grey and yellow curves. The grey curve is the Fed funds rate. That is the rate the Fed announces and targets and covered in the press. Since 2009, the Fed funds target rate is no longer one rate, but a range, currently somewhere between 2.25 and 2.50 percent.

The IOR rate, the alleged price ceiling, stood at 2.40%. This is the rate that the Fed pays to its member banks. When Powell began to understand that he was losing control over the Fed funds rate, he panicked and lowered the IOR rate as recent as several weeks ago to a level of 2.35%. Despite evidence to the contrary, the Fed still assumes that this IOR rate serves as a rate ceiling.

Supporting the rate floor has not been necessary anymore, since the upward pressure of market interest rates is of such an extent that the Fed is no longer needed at the lower bound of the Fed funds target rate. As a result, the number of reverse repos plummeted.

Where Does This Bring Us?

Whereas the Fed in the past influenced the Fed funds rate by reducing – or increasing – the supply of Fed funds in the market, it has shifted to a model in which the Fed pays interest over Fed funds to commercial banks. In theory, this all seemed perfectly fine, but in practice the Fed appears to have lost control over the Fed funds rate.

What does this all mean?

This means that if the Fed lowers rates, it could happen that interbank rates rise. Consequently, the Fed might have no other choice than to simply follow market rates and reverse its course. It could also happen that if the Fed leaves rates unchanged, the interbank rate continues to rise. What will the Fed decide upon in such a scenario? No idea, but the fact that the Fed lowered the IOR rate two weeks ago, is a sign of what is to come, since this rate reduction was a desperate attempt by the Fed to keep the Fed funds rate within its target range.

Or how do you think the Fed would feel if it announced to target a Fed funds rate between 2.25% and 2.50%, whereas in practice the market decides to set that very Fed funds rate at a level above the Fed’s 2.50% upper bound? Quite impotent, and the market could easily follow our interpretation.

And all this with, against the backdrop, Donald Trump announcing his next round of import tariffs on Chinese goods (raising tariffs from 10% to 25%) which could easily push inflation rates higher. And that inflation is, oddly enough, already precisely at or very near the Fed’s two percent target. In other words: with a little bit of luck, Trump himself pushes the Fed toward rate hikes, whenever inflation rates seriously exceed the Fed’s two percent target and begin to threaten the central bank’s mandate of price stability.