Old market wisdom tells us to "buy the dips." And most say that stock prices usually rise, apart from some unexpected 'shocks.' However, this presents a distorted view of how the markets truly work. What is the truth?

Stock Markets Are Bearish 40% of the Time

In finance, a 'bear market' is a period in which stock prices are on a downward trend.

And according to most investment advisors, it is apparent that we live in a world in which bear markets are very short-lived. Otherwise there would be no good reason to advise people to buy the dips.

But that is a big lie.

Once we realize that we face a bear market 40% of the time, we are in a better position to put the two great market crashes of this century into perspective.

Investors Have a Short-Term Memory

This is just another example of short-term thinking by investors. The crashes following the dotcom and subprime bubbles have been forgotten. Investors are delirious; they couldn’t be happier.

Well, until the next crash hits.

Or at least, until the next bear market.

The current valuations of tech companies (which are often not earning a dime yet) are a testimony to it.

There are more unicorns (companies valued at more than $1 billion during a round of business financing) than there have ever been. The current stock market craze is starting to look similar to the one we saw during the dotcom bubble.

Keynes and His Disastrous Investment Advice

In this regard, drawing a parallel with the stock market crash of 1929 is rather ironic.

Back then, it was the prominent economist John Maynard Keynes who committed a blunder.

What many people don’t know is that Keynes, next to his work as an economist, was also a passionate market speculator. He managed what we would now essentially call a hedge fund.

The bulk of his portfolio was invested in U.S. stocks. The 1929 market crash — which marked the start of the Great Depression — took a heavy toll on Keynes’s assets under management. On the 29th of October 1929, the Dow Jones declined by 25% in just one trading day.

But Keynes didn’t show the slightest concern after his huge losses.

He told everyone to "buy the dip," and assured them the recent adversity would only be a temporary setback. The economy was going to be just fine; stock prices were destined to rise again (and much faster this time).

That Keynes was wrong is an understatement. After a brief economic recovery, the party would be over soon enough.

And indeed, things were far from over. The bear market continued, and prices continued to decline until 1932.  When the stock marked bottomed, prices were 89% lower than their lowest point in 1929. 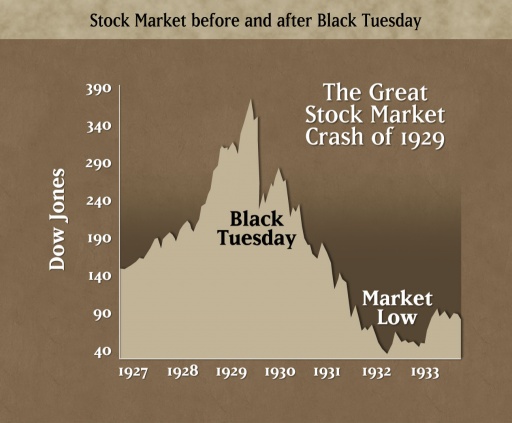 Buying the dip in 1929 would have been disastrous, as Keynes did (click to zoom)