Stress tests are a phenomenon that should raise questions directly: a banking regulator that conducts a publicly accessible stress test on bank´s financial statements. What incentive does a regulator have to see half of the banks it regulates fail? This façade has one objective: to increase trust in the banking sector. Unfortunately, the latest stress test last month turned out to be one miserable failure. “Only” three banks failed to pass the EU stress test: Banca Monte dei Paschi, Royal Bank of Scotland and Allied Irish Banks. But financial markets were not very convinced: some bank shares tanked and reached new lows. A mere week later, however, most share prices recovered. But thanks to the German Zentrum für Europäische Wirtschaftsforschung (ZEW) we have learned something of even greater importane. What am I talking about?

The (Ground-breaking) Research of ZEW

Ever since the 2008 crisis not only the European Central Bank (ECB) but the Federal Reserve began to test bank´s balance sheets. The procedure is simple: assume various pessimistic (crisis) scenario´s to figure out what impact these scenarios have on the capital (net worth) of the bank in question.

As I wrote in the introduction, the European stress test yielded few surprises. Three banks failed the test. But shouldn´t there have failed more problem banks in the test?

You might have guessed it by now: the European stress test was characterized by a lack of “stress.”

Until ZEW had the following brilliant idea: why not apply the U.S. stress test of the Federal Reserve on European bank balance sheets?

After all, we have:

The Results Were Ugly

The results of this little experiment were not very pretty. This time around, not three banks failed, but at least 15 banks. At least 15 European banks have a capital shortfall of, according to the Federal Reserve´s stress test, at least €2 billion. These are the outliers:

But perhaps even more shocking was the fact that of the 51 European banks many Dutch banks failed to pass the minimum levels the Federal Reserve requires in its stress test. This is something that should, without any doubt, worry us. According to the Fed´s stress test, the following Dutch banks had a capital shortfall of:

Whatever the case may be, these developments should worry us.

And we are not even taking into account that some investors or savers have deposited more than €100.000 (the ceiling of the Dutch deposit insurance) into one single bank account.

The Difference between US and Europe

Eight years after the Great Recession of 2008 we unfortunately have to conclude that the United States have succeeded to recapitalize their banks to a much larger degree than in Europe. The large amount of monetary and fiscal intervention in the U.S. banking system have provided U.S.-based banks the opportunity to take the necessary measures to raise their capital buffers.

The stress test is therefore, like we could have expected, much tougher and rigid in the U.S. than in Europe, simply because U.S.-based banks are better capitalized.

This all implies that European, and Dutch (!), banks are less well prepared for problems than their U.S. equivalents.

And if we want to worry even more, then we have to look only at the increasing delinquency rates at some European banks. 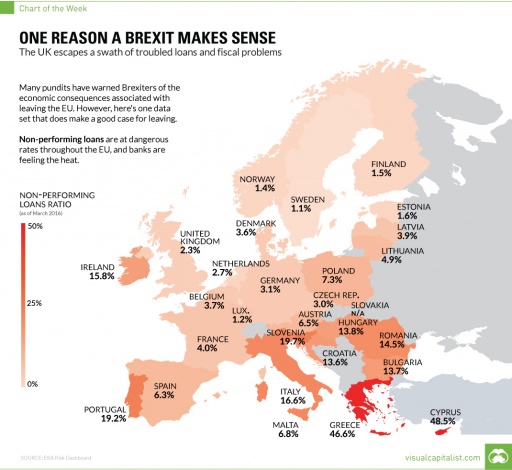 Can you spot the danger?

But please do not panic: the European banking regulator has conducted a stress test and concluded that everything is fine. So do not worry.

Do You Still Have Money at the Bank?

As I wrote earlier, the only way to remain unexposed to bank troubles and headaches is by withdrawing cash (paper money or bank notes) and putting them under the matrass. Bank notes are the only central bank liabilities which we are able to hold as everyday citizens.

Of course the yield on paper money is zero. But with interest rates nearing zero, or even going to negative, the opportunity cost of holding paper money has never been as low as today.

It should therefore not surprise anyone that the introduction of the Gesell-rule (which is in essence a tax on holding or hoarding paper money), as I remarked in my last article, a step by the ECB that we should anticipate as investors.

Investors in gold are, in this sense, “the lucky one.” Trust me, as soon as the Gesell-rule is introduced gold prices will be much higher than today. Buying gold after they start taxing holding paper money is akin to shutting the stable door after the horse has bolted, don´t you agree?