Followers were able to read in previous articles what my opinion about gold is. In the short run, despite the rally at the beginning of this year, I remain cautious. In the mid-long run I remain extremely “bullish.” This leads us naturally to the following question: what can we expect from gold’s little brother? Will silver, the“poor man’s gold,” perform better than gold? Where is the silver price headed?

What Is the Origin of This Year's Rally in Silver?

The silver price is up 36.6% year to date. Silver has outperformed gold, because the gold price is up a “mere” 21.6% since the beginning of the year. Silver, even more so than gold, comes from a multi-year bottom.

So why is the silver price doing so well?

But that is not the entire story.

The silver price, in comparison to the gold price, also depends heavily on the annual silver production and the demand for silver as an industrial metal.

So Where Did That Incredible Rally in Silver Come From?

This implies that the recent run-up in silver prices might have two possible sources: (a) the investment demand for silver or (b) a decreasing production.

We should question the latter. The annual silver production is at a historical high since two years. Only in 2010 and 2011 did we reach similar figures, and that was the era of irrational exuberance when silver prices doubled in less than six months’ time.

The Dollar and Silver

There is more prove: the inverse correlation between silver and the dollar is skyrocketing. This correlation substantiates my conclusion: the current rally in silver is driven merely by the whims and fancies of central banks. 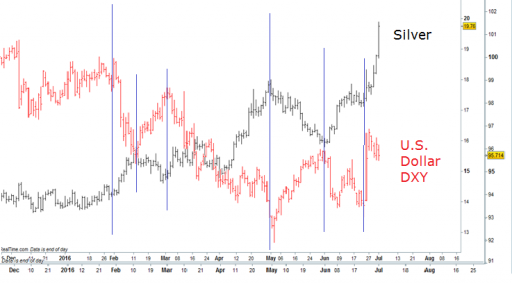 The same factors which I described last week to express my reservations in the short run for the gold price, apply to silver as well. Gradually purchasing is the best advice and increase purchases whenever a correction occurs.

Especially since the expectation is that the Fed is on the trajectory of raising interest rates. Better said, markets estimate the chance of the Fed taking its second step by hiking rates in September between thirty to forty percent.

Despite all this, it is definitely smart to consider investing 50/50 in gold and silver.