The day finally arrived. After ECB Chair Mario Draghi already postponed an earlier meeting out of fear, I speculate, to become subject of fierce election campaigns, the Italian finally found his way to The Hague and finally took time to answer questions of a group of Dutch members of parliament (PMs). After all, Draghi’s meeting was initially scheduled in February, when the election battle heated up. With great pleasure of the author, Draghi was given a hard time by most MPs during his visit. What can we say about Draghi’s answers to the questions of the Dutch MPs?

The concerns are crystal-clear. The Dutch pension savings are, relative to European standards, enormous. Most European countries depend to a large degree on a pay-as-you-go system, in which a state pension for yesterday’s working population is financed by today’s working population. The Netherlands has, in contrast, billions in pension assets.

Which means that Draghi’s interest rate manipulation is a rather expensive circumstance for the average Dutch citizen.

A PM of the Christian democratic party, CDA, confronted Draghi with the enormous size of the ECB balance sheet, to which Draghi reacted clearly agitated: “Our monetary policy has created the recovery…[and led to] 4.5m jobs in the Eurozone so far. That’s the reality, the rest is speculation.”

First, even if you were to believe the fairytale that the European Central Bank (ECB) can create jobs, even then it still remains a fact that employment is not a part of the official mandate of the ECB. The Federal Reserve, in contrast, does have an official mandate to achieve “full employment.” The ECB, however, has price stability as its only objective. In other words, Draghi should not brag with unemployment as a policy outcome, since employment forms no part of its responsibilities.

Second, monetary policy simply cannot create jobs. What it can do is:

Entrepreneurs create jobs, and the incentives behind their actions have little to do with Draghi´s monetary policy. More important is the political backdrop: that is also the reason why some Eurozone countries have a relatively low unemployment, while other countries still struggle with high unemployment almost nine years after the 2008 recession. Apparently, ECB monetary policy has had no effect whatsoever in the latter group? 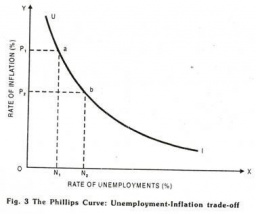 This theory was completely refuted when in the 70´s the US suddenly experienced an economic stagnation and high inflation at the very same time: a phenomenon we now know as stagflation. The trade-off between employment and inflation was largely an empirical illusion.

Draghi can and should never count those jobs as an ECB achievement. The Italian should never be allowed to take credit for creating jobs he did not create in the first place. Whether monetary policy is successful or not, cannot be concluded from employment numbers. What Draghi does, is akin to a thief who justifies his actions by pointing at the profitability of the store he is robbing: in that case, too, there is absolutely no causal relationship between action and outcome.

According to the Dutch newspaper FD, ING chief economist Marieke Blom came to the ECB Chair´s defense. Her analogy was interesting: “Summoning Draghi because of low savings rates is like complaining to the fire department about a wet pants when they just saved your burning house.”

Nevertheless, I propose a small nuance to Marieke´s defense. Draghi is not at all a fireman who has just rescued your burning house. Draghi was the pyromaniac who set your house on fire, put out the flames, and later quenched the fire for two weeks straight which caused the foundation of the house to slide and the house to crumble.

A pyromaniac, because that very same ECB kept, on the eve of the worst recession since the Great Depression, interest rates far too low despite enormous (real estate) bubbles in countries such as Spain and Ireland. At a certain point, more houses were built in Spain than in all the other Euro countries together. Moreover, the broader money supply increased at a faster pace than the at the creation of the Euro agreed upon “permissible” limit. That should have convinced the ECB to tighten monetary policy much earlier, something they failed to do as we now all know.

The ECB fueled these bubbles with cheap credit. Perhaps the ECB was not the pyromaniac, but at the very least the generous and unconditional supplier of the pyromaniac.

And now, with interest rates too low for far too long, the foundation has been damaged irreparably. If we begin building a house and interest rates rise, the whole house of cards will collapse yet again.

For now, Draghi gets away mercifully with his reckless monetary policy.