President of the European Central Bank (ECB), Mario Draghi, stunned financial markets last week by announcing a U-turn in the Eurozone’s monetary policy. Instead of a long-awaited rate hike, Mario Draghi announced on the contrary a new monetary stimulus package. The Italian, among other things, pulled an old trick out of the ECB sleeve (the so-called TLTROs), mere months after the European version of quantitative easing was brought to a complete stop.

But it should be very clear to close observers what really is happening: Mario Draghi will step down in October this year and wishes to avoid a renewed recession and/or financial panic at practically all cost during his term. And since the ECB lowered its economic forecast for 2019 from 1.9% GDP growth to a mere 1.1% growth, it seems that the odds of a European recession in the short run are on the rise.

As a result, the euro weakened against the dollar (EURUSD at 1.12), the rate on German bonds fell sharply and gold prices barely moved. Gold prices, however, already fell below $1,300 dollars per troy ounce earlier this month.

Unfortunately, Draghi’s attempt to stop a recession in its tracks had – counter to his own expectations – an unintended effect. Instead of calming markets, Draghi’s pessimism led to a flight out of banking stocks. Various banking stocks fell sharply: Banco Santander dropped by 4%, the Swiss UBS by 3%, and Intesa Sanpaolo dropped by more than 2%. Apparently, the market suspects that Draghi secretly knows more about the exposure of the Eurozone banking system than he is telling, especially since banks from peripheric euro countries were hit hard last week.

Still, Draghi appears to have good reason to be worried about the Eurozone’s economic outlook. Whereas Germany is not yet in a “technical recession” (a technical recession means two subsequent quarters of negative GDP growth), Italy is. Lukas Daalder briefly summarized Italy’s recent troubles as following:

“Temporary factors, temporary setbacks. In the case of Italy, none of these seem to apply: the two quarters of negative growth are the direct consequence of higher interest rates on capital markets and escalating political tensions with Brussels. As a result, business investment declined substantially. Nothing temporary here.”

The questions that remains to be answered is thus whether Draghi’s latest move has been useful. For now, it appears that his pessimism, on the contrary, has turned out to be a reason for a slight panic on financial markets.

ECB Brings TLTRO Back to Life

One of the changes in Eurozone monetary policy is that Mario Draghi is bringing back ECB’s TLTRO program (TLTRO stands for Targeted longer-term refinancing operations).

TLTRO is a source of financing for ECB member banks (that is, the Eurozone’s commercial banks). With TLTRO, banks are able to borrow money against the going official ECB rate (currently negative) and a fixed maturity of multiple years. This means that commercial banks no longer need to compete for savings. A bank could, after all, finance itself cheaper and easier at the ECB, as well as with less risk (because: fixed maturity). This means that the TLTRO program completely takes away the interest rate and liquidity risk of banks. Borrowing a billion through the TLTRO facility, means being able to lend a billion, of course on the condition that the borrower ultimately repays the loan to the bank (this is one of the few things that the ECB has – at least for the moment – not covered).

Using the TLTRO program in the past, banks in the Eurozone could access the ECB in 2011/12 for a loan against the ECB rate, with a fixed interest rate and a three-year maturity. Central banks usually limit themselves to providing short-term (overnight) loans to banks, so the TLTRO program means the ECB is actively intervening in long-term credit markets.

Hence, TLTRO does work on the initiative of the banks, and not so much on the initiative of the central bank (which, of course, certainly was the case of quantitative easing). If there is no demand for credit and there are no creditworthy counterparties (which, at the very least, can pay back the principal), then TLTRO will end up being barely used. Yet the fact that sovereign yields are falling, indicates that the ECB is again offering the perfect, riskless arbitrage opportunity: buy 2 to 3-year government bonds, financed with free ECB-money, and absolutely no interest rate, liquidity or credit risks.

Italian banks in particular have generously resorted to the ECB’s TLTRO facility, which should not come as a surprise. The Italian banking system is the weakest and most worrying of the entire Eurozone.

Italian banks have resorted massively to TLTRO at an earlier occasion and apparently cannot do without. To avert a financial crisis, Draghi took the decision to make the TLTRO facility available again. Source: Bloomberg 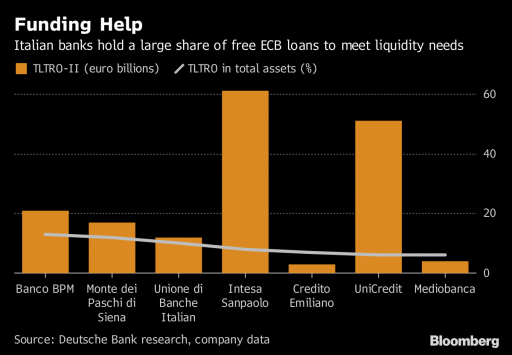 The news you should be looking out for is any news related to the Italian banking sector. The largest surprises will probably come from the Italian banking system – with all the consequences this entails for all the other euro countries. While major Eurozone economies are gradually falling into recession and Draghi appears to be panicking, the ECB seems to be losing control and the peripheric economies to cause great troubles yet again for the stronger euro countries.

The underlying issues have never been resolved: the high debt burden still exists and has, in many cases, worsened over time (because: ultra-low interest rates, see for instance the cases of Greece, Portugal and Italy), many bank balance sheets have not been cleaned up since the 2011-crisis and banks still have many toxic loans on their books (for instance, again, Italy), and populism is still gaining force.