The stock market has been characterized by a decade-long complacency. The longest ever bull market in the history of the stock market has led to a curious situation in which bears are dismissed as gloomy alarmists, more or less ranked alongside wearers of tinfoil hats, astrologists and other types of conspiracy theorists. That might be the case for the moment, but that does not mean that we are wrong or that bears will be dismissed forever. By the time the current market will reach its violent end, hindsight bias – rationalizing any event after the fact – will assure that bulls await a similar fate. Whatever those short sellers from the stunning Oscar-nominated movie The Big Short knew, was something that more or less everybody knew, right? That these statements are far from the truth, can be concluded from a quick glance at the data. An overwhelming majority of retail investors suffered heavy losses in 2008. But what if we are facing an even darker scenario today than in 2008?

First: Corporations Were Never as Indebted as Today

If we take, for starters, all outstanding corporate debt in the United States and compare this grand total with U.S. gross domestic product (GDP), we are in for a stunning surprise: the relative indebtedness of corporations was never as high as today. Corporate debt already amounts to forty-six per cent of GDP, more than on the onset of the 2001 dotcom bubble and the Great Recession of 2008. 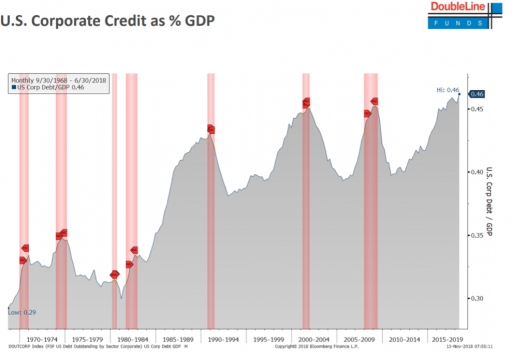 Second: Interest Rates Are Completely Out of Sync with Debt Levels

All this makes sense. Any given company takes on more debt? Then the risk of default increases. Leverage has an important downside, that is, default becomes more probable. This is also the basic idea behind the beta in the financial capital asset pricing model (CAPM): a company with leverage (which gives us a levered beta different from an unlevered beta) implies that the company will do better when everything goes well, but also implies a greater risk when things go less well. All other things equal, it should be clear that with higher debt interest rates ought to rise as compensation for the increased risk. A larger debt load means that more money is needed to cover interest expenses. As a result, less margin for safety for a business that faces a rough patch.

Oddly, this logic does not appear to apply this time around. But remember: the most dangerous words uttered on the stock market are probably the words “this time is different.” Corporate yields go down, despite the fact that corporate debt is heading higher. 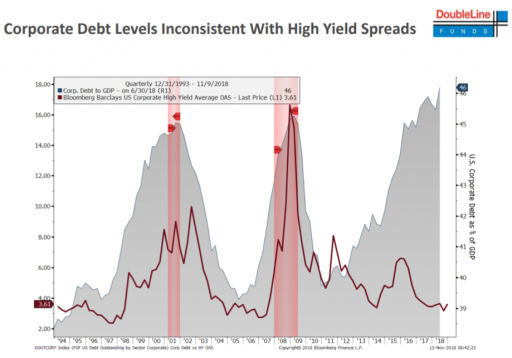 Third: The Current Can Easily Shift

In any period of economic exuberance (a boom) we can observe the following tendencies:

Here we went – in a somewhat logical sequence – from one to five. Point five in particular is interesting. In the bond universe, we distinguish between two types of debt:

Now, many investors – institutional investors – are limited on bond markets to investing in “investment grade” paper. Take a random institutional fund – say KLM’s general pension fund. The managers of this fund are statutory limited to investing in “investment grade” paper. And they are certainly not the only ones. Better yet, they are the rule and not the exception.

Yet it is the case that the amount of BBB-graded corporate debt is enormous. So enormous that there is two and a half times as much BBB debt as “non-investment grade” or “junk” debt. Only during the dotcom bubble we reached the same level of insanity. In 2007 – 2008, there was “only” 1.5 times as much investment-grade BBB debt as junk debt.

What are the consequences of all this? Simple. As soon as this BBB-graded corporate debt is downgraded, many investors will be forced to give up on these bonds and they will have no other option than selling them. KLM’s pension fund, for instance, will be forced to sell this riskier paper and to buy other, investment grade assets.

This brings us to situation in which – to draw a parallel – someone in a filled theater screams that there is a fire, at which everybody panics and tries to force their way out through a much too small exit. Rates on riskier paper will go up to dazzling heights, with all the consequences this move would entail. This is how the beginning of the next recession will probably look like. 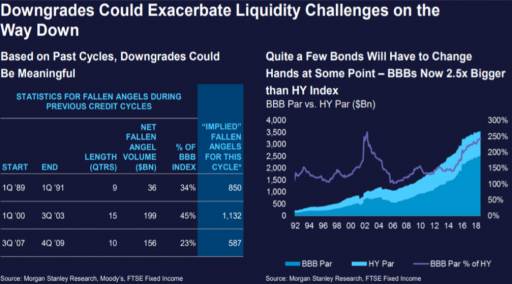 The above charts show that there are troubles below the surface. Do not let your impatience get the best of you. Yes, gold prices fell toward $1200 per troy ounce. But gold appears to the most reasonable alternative in a world filled with dangerous bond and perfectly priced stocks.