This week, I wanted to highlight the United States auto industry. In 2008, the real estate market was the main culprit: everyone was talking about the “subprime” mortgage-crisis. Subprime involves riskier borrowers with lower credit scores. Two years ago, I emphatically said that it this time around a recession will not revolve around subprime mortgages, but more than anything else subprime auto loans. And this is especially remarkable given the fact that in 2008 various large American car manufacturers were on the brink of collapse and eventually had to be bailed out by former president Obama.

“The number of loans at least 90 days late exceeded 7 million at the end of last year, the highest total in the two decades the Federal Reserve Bank of New York has kept track. Expressed as a percentage of total debt, the delinquency rate is the highest since 2012, as overall borrowing has also increased.”

In other words, the number of outstanding auto loans that are at least 90 days late reached an incredible 7 million loans at the end of last year. Remember that roughly 300 million people live in the United States. This is the highest number of loans with late payments since 2012.

Looking at the same data but in dollar terms, we reach similar conclusions. Late payments on car loans reached their highest levels since 2012 as a percentage of total outstanding car loan debt as well.

This is bad news for two reasons:

As I quote Bloomberg once again:

“Disappointing dynamics in sales and delinquencies in the auto sector could be a foretelling sign,” said Yelena Shulyatyeva, senior U.S. economist at Bloomberg Economics. “Recent developments confirm our estimates that the U.S. economy has entered the late stages of the business cycle (..).””

Put differently, the car industry is a thermometer of the American economy and the recent weakness in car sales does not bode well for the broader economy. In fact, this recent weakness comes to show that we are gradually heading for an economic slowdown. 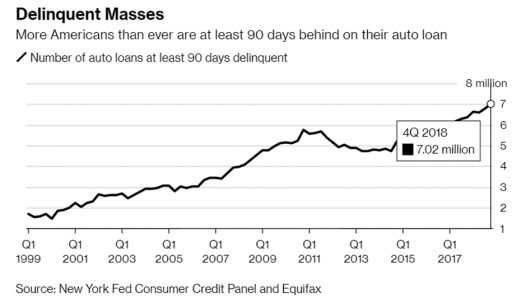 The New York Fed's Own Report

The data that led Bloomberg to such a pessimistic outlook came straight from the Federal Reserve in New York. The New York Fed publishes the data and an in-house report on the health of consumer credit markets.

Not just Bloomberg, but also the New York Fed holds a pessimistic outlook on the U.S. economy:

“After years of growth among borrowers across the credit score spectrum, 2018’s strength in auto loans was primarily driven by those originated by the most creditworthy individuals, while originations to those with scores below 720 have leveled off, albeit at high volumes. The high volume of prime originations has caused a quality-shift in the outstanding pool of auto loans and, as of the fourth quarter of 2018, 30 percent of the $1.27 trillion in outstanding debt was originated to borrowers with credit scores over 760.

Meanwhile, the share of total auto loans outstanding that was originated to subprime borrowers fell to 22 percent. In fact, these percentages would suggest that the overall auto loan stock is the highest quality that we have observed since our data began in 2000. However, with growth in auto loan participation, there are now more subprime auto loan borrowers than ever, and thus a larger group of borrowers at high risk of delinquency.”

What is especially interesting, is the enormous growth in subprime auto loans (relative to non-subprime or more creditworthy auto loans) in 2018. As a result, the quality of outstanding auto loans has been diminished. In other words, there is a larger amount of total outstanding auto debt, and a larger share of that total auto debt involves subprime loans. Not a good sign. 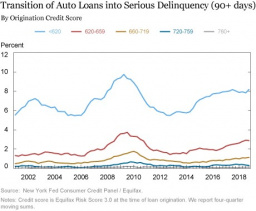 <p>Only the share of late payments on auto loans with the highest credit scores dropped; the other, riskier segments experienced a rapid increase in delinquency. Source: New York Fed</p>

Last But Not Least: The Second-Hand Car Market

In the United States, it is completely normal to finance second-hand cars with credit. These types of loans easily have a maturity of five, six years. Now something strange might be happening: Americans have shifted on a massive scale from sedans to SUVs (mostly due to lower oil prices). Better yet, the market for sedans has completely collapsed in the U.S. But this implies that the market prices of second-hand sedans, which were bought on credit, have also declined: an sudden abundance of second-hand sedans faced with lower consumer demand.

This means that subprime auto borrowers could resort to an old trick in the book: handing over the keys to the lenders and defaulting. This time around not on a mortgage, but on a car. Why would you keep paying for an auto loan if you can hardly resell it after paying off your credit? This becomes especially an issue when it involves owners with two or more cars, often times both a SUV and a sedan, which is very common in the U.S.

Interest rates on auto loans are rising (currently slightly above 5%, whereas roughly a year ago rates stood at 4%), which reduces the affordability of cars even further. This is the paradox of this stage of the economic cycle: the U.S. Treasury rate is falling (currently at 2.7%), whereas all other rates are rising (rates on auto loans, mortgage rates, corporate rates, etcetera).

The auto industry is a symptom of underlying economic weakness. Perhaps this time’s bubble is spread out over various industries. But the next recession could easily end up carrying the auto industry in its name.