While the dollar was struggling overall in 2017, non-dollar countries took full advantage of last year´s dollar weakness. According to the Bank of International Settlements (BIS), the total amount of credit to foreign (nonbank) borrowers increased dramatically as a result of the weaker dollar. By the way, feel free to interpret “nonbank borrowers” as emerging market economies. In the second half of 2017, a staggering 22% was issued in dollar-denominated debt. Issuing dollar-denominated debt is all well, as long as the dollar depreciates or, at least, does not appreciate.

Argentina is perhaps the best illustration of how issuing dollar-denominated debt can go terribly wrong. In June last year, the Argentinian government sold $2.75 billion dollars of 100-year dollar-denominated sovereign bonds. Against a coupon rate of 7.25%, the auction of the bonds was oversubscribed by more than 3.5 times. It appears as if everything was champagne and caviar, until last week things took a turn for the worse.

The Argentinian Peso and the Dollar

Argentinian president Mauricio Macri inherited an economic mess from his predecessor Cristina Kirchner. The rudderless South-American country suffered from both high inflation and economic aches; the Argentinian National Bureau of Statistics reported inflation rates, yet everyone knew how incredibly manipulated these numbers were. No-one but vultures were interested in Argentinian sovereign debt.

Yet, Macri was off to a good start. He pushed ahead some urgently needed reforms, among which an important monetary reform (Macri ended capital controls and the unsustainable government-managed dollar exchange rate). The end result was that Argentina eventually returned to international capital markets and even issued 100-year sovereign debt against relatively favorable conditions.

Macri´s optimistic plans have therefore been seriously undermined. Because of the increasing cost of credit in the US, Argentinian capital began fleeing the country and moving northwards. The Argentinian peso already lost more than a quarter of its value against the dollar. This, of course, leads to terrible consequences for the Argentinian population: the outstanding dollar-denominated debt has, effectively, increased by a quarter in terms of pesos. On top of that, interest expenses in local currency over these dollar-denominated debts have also increased by a quarter. As soon as the peso fell off a cliff (the peso was in fact already one of the worst performing assets in the first quarter of 2018), the Argentinian central bank was forced to raise interest rates. In less than two weeks, the benchmark rate was increased from 27.25% to 33.25% and eventually all the way up to 40%. In addition, the central bank burned through billions in foreign exchange reserves. None of these things made any difference, since the peso has continued its fall. As a result, Mauricio Macri this week asked the IMF officially for help to combat the freefall of the Argentinian peso.

“A strengthening dollar pushed Argentina to raise its policy interest rate (…), underscoring the mounting pressure on emerging market currencies,” wrote the Financial Times. “[O]ther EM [emerging market] currencies have also suffered this month as the US dollar has strengthened after losing value for more than a year.” One dollar costs more than 22 pesos, while a year earlier the dollar still stood at 16 pesos per dollar. 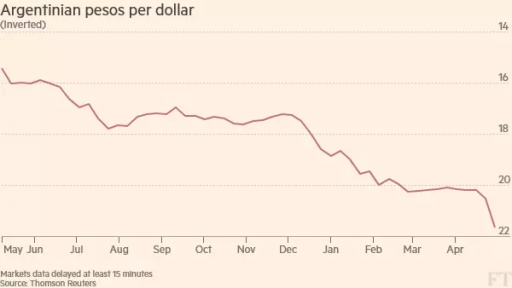 The decline of the Argentinian peso against the US dollar. Source: Financial Times

Dollar Cycle Seems to Have Reached a Turning Point

I wrote earlier about my expectation that the dollar will strengthen. I continue to expect a strengthening dollar. The fundamentals behind a stronger dollar have been around for some time, but will perhaps finally come to the surface later this year. The Argentinian peso is the first victim of renewed dollar strength. And my thesis is, moreover, that what is happening with the Argentinian peso is a sign of what awaits us elsewhere. 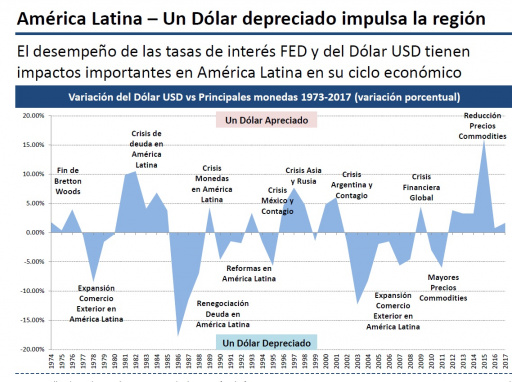 In this regard, 2017 appears to have been a gap year, a well-deserved break. On the contrary, 2018 appears to be the year of settlement. At first glance, higher interest rates and a stronger dollar seem bad news for precious metals prices in general. And this time around this could be just as well the case. What it, however, also means, is that the global economy is heading for a rough patch. And that will be very good news for gold prices in the mid-long term.

The often-praised Elon Musk is losing his patience as well. His Tesla imperium is on the brink of collapse. Musk relies every year on billions of outside financing from capital markets: Tesla is anything but profitable and desperately needs billions to be able to finance current production and future expansion. Capital markets have, to say the least, rested on its laurels over the past few years. Elon Musk was handed billions under false pretexts. False promise after false promise, even the (recently) o so generous capital markets seem to have woken up. The “bond vigilantes” are back in town. To go ahead and crucify analysts from that very same capital market does not seem a very fruitful way or profitable strategy for a cash-losing business.

This week Elon Musk showed a different face. In a conference call with (sell-side) stock analysts, he interrupted important questions on the current production of the Model III and the need to obtain additional outside funding to keep Tesla afloat. “Next, next”, an annoyed Musk said. A brief moment later, he added that “boneheaded questions” were “not cool.” When another RBC analyst took the floor, Musk even completely ended the call. “These questions are killing me,” Musk remarked. He switched to less obnoxious nonfinancial questions by a representative of retail investors.

“Bond Vigilantes” Are Back with a Vengeance

While interest rates are on the rise in the US, the loose-credit party suddenly took a different turn. Suddenly, lenders are becoming increasingly critical. And that means bad news for emerging economies, especially those emerging market economies that during the “good times” counted on cheaper dollar-denominated loans. The return of the bond vigilantes also means bad news for Elon Musk and Tesla, as well as other similar companies that are forced to finance negative cash flows with the direct aid of capital markets.

The fact that Elon Musk was not in an overly good mood can probably be explained by the increasing pressure from bond investors. Indeed, Tesla bond prices have been declining. The loose-credit party is coming to a premature end and its finale will be far from pretty or painless.