Reality is finally dawning on investors: we are on the verge of a global trade war. As a consequence, last week, the Dow Jones Index closed on Thursday for the eighth day in a row with a loss. A rather rare event, since such persistent losing streaks do not occur often. Both in 2008 (during the Great Depression) and in 2011 (during the European sovereign debt crisis), the Dow Jones had an equally bad losing streak. Yet, ever since, a losing streak as the one we observed last week has not occurred.

In China, things look even worse and have actually become considerably worse since the beginning of the US-China trade war: the Shanghai stock index is down by almost 20% year to date. So far, the Chinese stock market has been one of the worst performing stock markets in the world in 2018. What is happening beneath the surface in the Chinese economy?

The (Enormous) Problem in China: Why the Chinese Stock Market Is Marking Multi-Year Lows

China is a rather odd country. One of the former governors of the Liaoning province (and currently Prime Minister), Li Keqiang, did not trust the national GDP data as a measure of true economic growth in China. Instead, he relied on a combination of data on electricity consumption, bank loans and railroad volume to track economic growth: The Economist later credited the name “Li Keqiang Index” to this alternative measure of Chinese economic growth. While the index has lost relevance over the past few years, it still signals a fundamentally important problem: the reliability of the data that is being published by Chinese authorities. If even China´s very own government officials do not trust the information and data that is coming from Beijing, why should we? 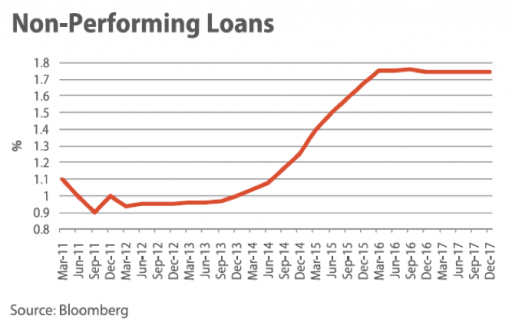 Observe, for instance, the following chart. In the above chart, you can see the number of loans in trouble, as a percentage of total Chinese bank assets. What draws your attention? First, the NPL (non-performing loans) ratio is rather low; only 1.75% of all loans are in trouble, with debtors not repaying principal or failing to pay interest. That number is, even compared to developed countries, remarkably low. What, however, should especially draw your attention, is the rather remarkable straight curve and the apparently extremely stable 1.75% NPL rate that was reached at the end of 2015. In the years after, the NPL ratio has hardly moved an inch. Is there so little volatility in Chinese NPL ratios? Why is this the case?

Whenever you see this kind of data coming out of China, you should immediately ask yourself why the data behaves overly stable, since in many cases it actually involves an artificially induced stability, let us say, an illusion of stability.

This is also the case for Chinese NPL ratios. Chinese banks lend money to state-controlled enterprises that are already overindebted and no longer able to pay interest on their loans. With the additional credit obtained from the Chinese banks, they - in turn - pay interest on their outstanding loans to the bank. As a result, the bank does not (yet) have to recognize a loss (that is, classify the loan as a “non-performing loan”). But it is a Ponzi scheme, in a certain sense. As long as the bank is willing to continue to lend to this “zombie” company, this house of cards can be kept intact.

This has led to an odd situation: these state-controlled enterprises represent a staggering 55% of all outstanding corporate debt. Nonetheless, they are responsible for a mere 22% of total economic activity in the Chinese private sector. Hence, the Chinese private sector seems to be reasonably positioned to survive some economic hardship (and, as a result, stock valuations in China appear favorable), yet the (semi)public sector appears to be extremely weak and fragile. China’s state-owned enterprises (SOEs) could wreak havoc on the Chinese economy.

China´s leaders appear to have recognized this very issue, and as a result, gradually began pushing state-controlled enterprises off the cliff. Various state-owned enterprises (SOEs) ended up in default, as you can observe in the following chart: 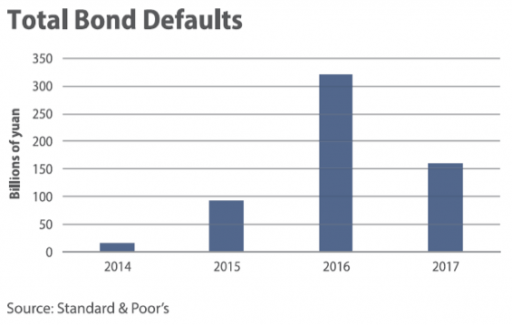 Altogether quite a remarkable feat by the Chinese authorities. A feat that perhaps led you to wonder: does this Chinese scheme to maintain NPL ratios artificially low, remind you of the metaphorical beggar who asks for charity from an innkeeper but promises, evening things out, to spend it in the very same inn? There is no denying that this scheme is ludicrous. Why would anyone be willing to pour more money into the same black hole?

The answer is, of course, no one, at least not with his or her own money. But these are state-owned enterprises (SOEs) operate and cease to operate for political, not economic reasons.

It is often said that the Chinese economy is a ticking time bomb: the Chinese debt burden is enormous and analysts often cite the astonishing growth in credit (which, on a side note, is slowing down quite rapidly) to show that the Chinese economy is balancing on the brink of an economic abyss. This is quite exaggerated, because the Chinese save an awful lot of their income; these savings cannot, in principle, move abroad (that is, in many cases, simply prohibited), is generally not invested in the Chinese stock market (because the Chinese stock market crash of 2008 has left scarce in the minds of Chinese investors) and, as a consequence, often ends up in the real estate market and/or the formal and informal banking system (also called the Chinese shadow banking system).

Now, if you observe the below chart, then you will see that the dollar-denominated debt has been growing significantly over the past year. Curiously, in the case of China, no public debt is being financed in dollars (something which, of course, was the case in Argentina). But a large part of the banking system and the shadow banking system are partly financed in US dollars rather than in Chinese yuan. 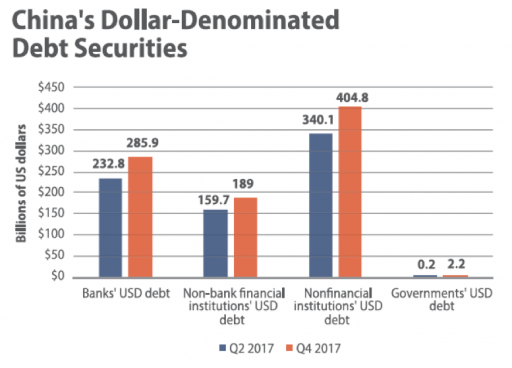 This means that a strengthening of the dollar is bad news for the Chinese economy. And in this regard, the trade war between China and the US could have unforeseen negative consequences for both countries. The dollar rose over the past few weeks in anticipation of a full-blown trade war. The idea, in essence, is that domestic prices in the US will rise at a faster rate, because of the newly imposed import tariffs. As a result, the Fed could be forced to raise interest rates faster and higher. This could cause great troubles for Chinese banks and businesses, which have chosen to finance themselves with US dollar debt.

Nonetheless, the People’s Bank of China (PBoC) appears to have enough ammunition to prevent a severe weakening of the yuan against the dollar. Or, well … in three years’ time the Chinese central bank lost almost a quarter of its dollar reserves. With a quarter of its dollar reserves, the PBoC managed to push up the yuan/dollar exchange rate by almost 15%. But it remains to be seen whether the PBoC’s dollar reserves suffice when the dollar truly begins to strengthen and the US-China trade war escalates even further.

Recently, it has been suggested that China still has a “nuclear” escape option from the trade war with the US: the PBoC still has a vast amount of US Treasuries on its balance sheet. If the PBoC would do a fire sale of their US Treasuries and sell them into the market all at once, US sovereign yields (interest rates) could easily rise by a lot. At least, in theory. In practice, such a move is close to impossible, since the PBoC would incur massive losses on its positions. As a result, the Chinese central bank´s balance sheet could be severely impaired, and an already fragile banking system would be at the receiving end, with devastating consequences as a result.

The Dow Jones Index Closes for the Eighth Day in a Row in the Red; When Was the Last Time the DJIX Suffered an Eight-Day Losing Streak?

Not only would China suffer from a trade war between the US and China – and most probably other nations, but the American consumers and producers themselves would also suffer from a trade war. The stock market did not react very positively to the news that a trade war is becoming increasingly unavoidable. Last Thursday, the Dow Jones closed in the red to set an eight-day losing streak. When was the last time that this happened?

As we can appreciate from the below chart, an eight-day losing streak is quite an extraordinary event. Since the change of the millennium, such losing streaks only occurred in 2001, 2008 and 2011. To find a losing streak of longer than eight days, we have to go all the way back to 1978. The 1970s, of course, are characterized by a secular “bear market”: the 1970s were probably the worst imaginable years for stock market investors since the Second World War.