Last week, the gold price closed near $1,325 per troy ounce, which is remarkable, since gold prices broke convincingly through the $1300-barrier after New Year’s Eve. Gold prices rallied even further by another three percent, topping $1340/oz, but slightly retreated last week. The motive? Everything appears to be awesome again on stock markets and Trump – insofar the rumors go – is nearing a tough fought trade agreement with the Chinese to resolve an impending all-out trade war. But this sudden wave of good news is quite remarkable after an important novelty earlier last week.

Gold experienced a remarkably strong January due to the increased volatility on stock markets worldwide. Many stocks seemed not just quite as invincible as previously thought. Even Wall Street’s favorites, such as Apple, were deep in the red.

But what has happened with volatility ever since December’s turbulence? Volatility fell gradually toward the levels seen over the course of last year’s summer months – when we experienced another handful of instances of exuberant stock market positivity. In February, VIX fell even further and currently hovers around “just” 14.

In other words, markets appear to think that everything is going great – and, as a consequence, that a rather weak December month merely meant a temporary setback and was, in essence, a reflection of a brief but unjustified fear among stock market investors. This is one of the reasons why gold prices gradually corrected after rallying earlier this year.

But is everything still going great?

This week, I wanted to take the opportunity to share another interesting graph with my readers. You might be aware of the fact that I have mentioned on multiple occasions that Trump’s tax cuts will hardly have any impact. (That is, with regard to US economic growth, as Trump’s tax cuts are obviously having a terrifying impact on the growth of the national debt!) You might also be aware of the fact that economic growth – both in the United States as elsewhere, for instance in Europe and China – is weakening.

Now it appears that growth will not pick up and recover in the short run. Observe, for instance, the following chart with the (monthly) growth in capital investment, including national defense. 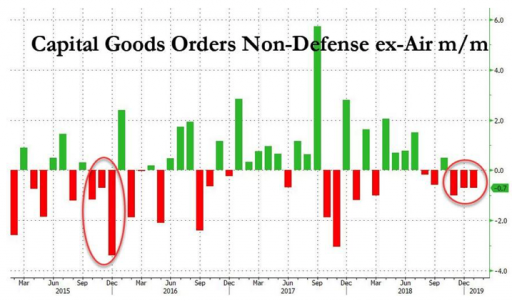 Volatility could easily drop even further, which means that gold prices will remain under pressure in the meanwhile. But the underlying economy is weakening. And, as a result, it will be inevitable that the roles will be reversed in due time.